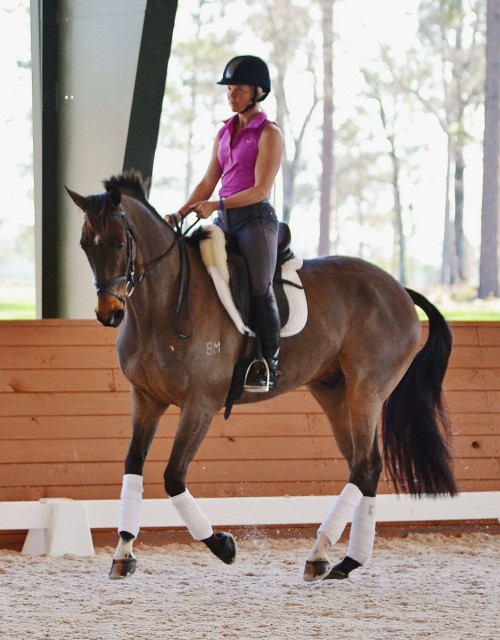 Hello from Aiken! I flew in to Georgia this afternoon and made it to Stable View Farm just in time to catch the final three rides of the day. Last year’s Fair Hill CCI3* winners Jan Byyny and Inmidair were the last of the listed pairs to go today, and Coach David O’Connor worked with them on several of the movements they’ll need for tomorrow in Advanced Test A, which the USEA clarified last week is meant to prepare horses for a four-star, while test B is geared toward three-star. The shoulder-in down centerline has been giving a lot of riders trouble in schooling, and when I asked David about it between rides, he agreed it’s difficult, but he’s seeing improvement.

David first helped Jan work in the extended trot, as JR broke to canter several times as she pushed for more out of the movement. Jan felt she needed to push more because JR started to fall behind her leg, but David said that extra push was causing JR to break because he started to feel out of balance. He had Jan and JR work across the diagonal, with Jan pushing in the first third of the diagonal to build the trot and then holding the extension by bracing her back across the remainder of the diagonal. “You don’t have to push him to get the bigger score,” David said. “Push and then support him.” As Jan worked on the extended trot, JR became visibly tense and hotter, and David had her work back and forth between transitions within the trot  to soften him and help him relax.

Jan and JR won their section of Intermediate at Pine Top earlier this month, and he looks excellent at this point in the season. This is the first time I’ve seen him since Fair Hill last fall, and even with the tension he showed at certain points throughout the lesson, he had numerous show-stopping moments in his trot work, especially in the medium. Remember that this pair has a free flight overseas to the competition of their choice courtesy of the Dutta Corp thanks to winning Fair Hill, so it’s going to be very exciting to follow along with their 2014 season.

I also have to give a special shout out to Jan Byyny’s other well-known upper-level ride Syd Kent, who suffered a very serious hoof injury last year at Millbrook. His situation was looking very dire for a long time — and it seemed likely he might never compete again — but Caitlin Calder told me today that he’s not only healed but flourishing, and he looks better in his body and flatwork than he even did before the injury. Syd will be making his triumphant return to competition this weekend in Open Intermediate at Pine Top, and I’m sure I speak for all of Eventing Nation when I say we’re so relieved he recovered! 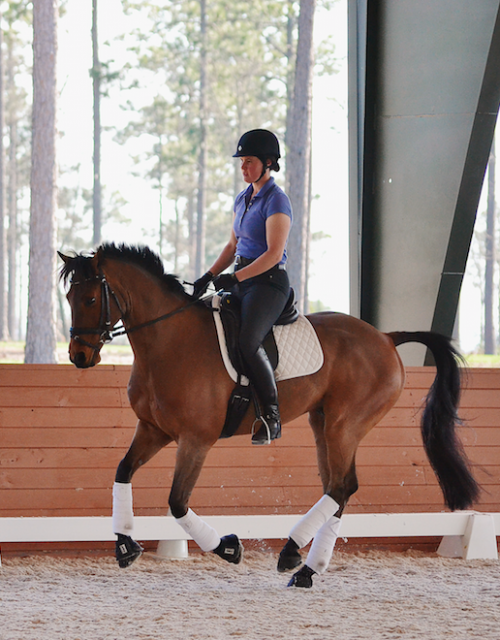 Jan stayed after her lesson to watch Maya Black — who is working for her this winter here in Aiken — and Doesn’t Play Fair, the quirky gelding we’ve profiled here on EN in the past. One of the stars of Pacific Northwest eventing, Maya was one of the riders invited to train with David this winter, and she said she felt like she got a lot out of this lesson, which comes on the eve of her very first Advanced at Pine Top. It’s also Cody’s first event at this level, and they’re certainly ready for the move up after placing second in the Galway Downs CCI2* last fall. Poor Maya is still lamenting that pesky rail that kept her from taking home a blue ribbon!

Maya just recently started teaching flying changes to Cody, and she said he’s become a little change happy as a result. David told her she needs an aid for no change, which is opening the inside rein. David had them school the half pass in counter canter to centerline, then proceeding straight while keeping the inside rein open. Once Maya adjusted her seat to ride the inside of the canter, Cody stopped changing and they conquered this movement beautifully. She said she could feel herself shifting her weight in the wrong direction, and David had her ride haunches in so she could memorize the seat position she needed for the half pass to prevent that flying change.

David finished the lesson with coaching Maya on the shoulder-in down centerline, where she initially overshot the proper place to start her turn, as marked by David’s trademark cones. “There’s only a one-stride difference between finishing the turn and starting shoulder-in,” David said. Riders get in trouble when they start the shoulder-in before completing the turn, and David emphasized it’s critical to wait. David said he’s impressed with little Cody, who might look like a pony but has an incredible jump on him. Jan commented she thinks this horse is going to go all the way; with a very determined Maya in the irons, I don’t doubt he will! 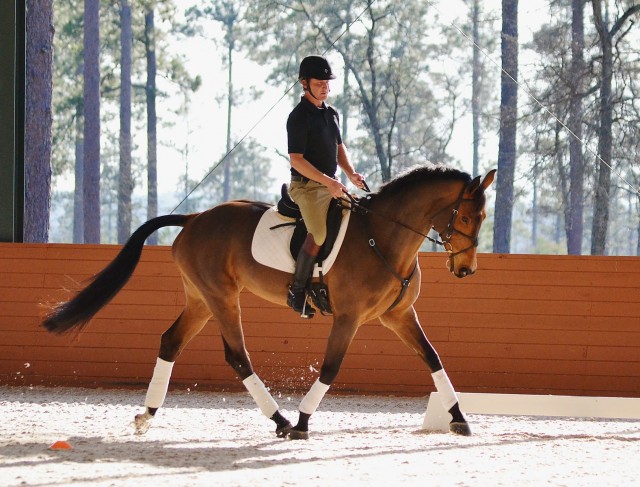 Kurt Martin and Anna Bella, a lovely mare we’ve also featured here on EN, had the final lesson of the day. David said she looks much more fit even since last fall when she stole the show in the Fair Hill CCI2*, and Kurt said he had a cross-country school on her recently that “was so good it was almost scary.” Indeed, she looks incredible and very ready to tackle Open Intermediate this weekend at Pine Top. Kurt adores this mare, and it’s easy to say why. She’s incredibly feminine while still exuding a certain self confidence. She’s like Beyonce in horse form! David also had Kurt work on making Anna Bella work in counter canter and wait to change by holding the outside rein, and they schooled many of the same movements Maya and Cody did in preparation for tomorrow.

All three horses looked fantastic, and it was a real treat to see all of them have a quiet afternoon with David, who said he’s pleased with the progress the listed riders have made through the winter. In particular, he said he’s seen a significant improvement in the straightness riders are achieving in their flatwork, which he said absolutely had to improve in his sessions at last year’s USEA Convention. The weekend festivities kick off tomorrow morning at Pine Top at 7:30 a.m. I’ll be primarily covering Advanced Test A and Open Intermediate 3 tomorrow, but, as always, I’ll try to see as much as I can to bring you all the action.