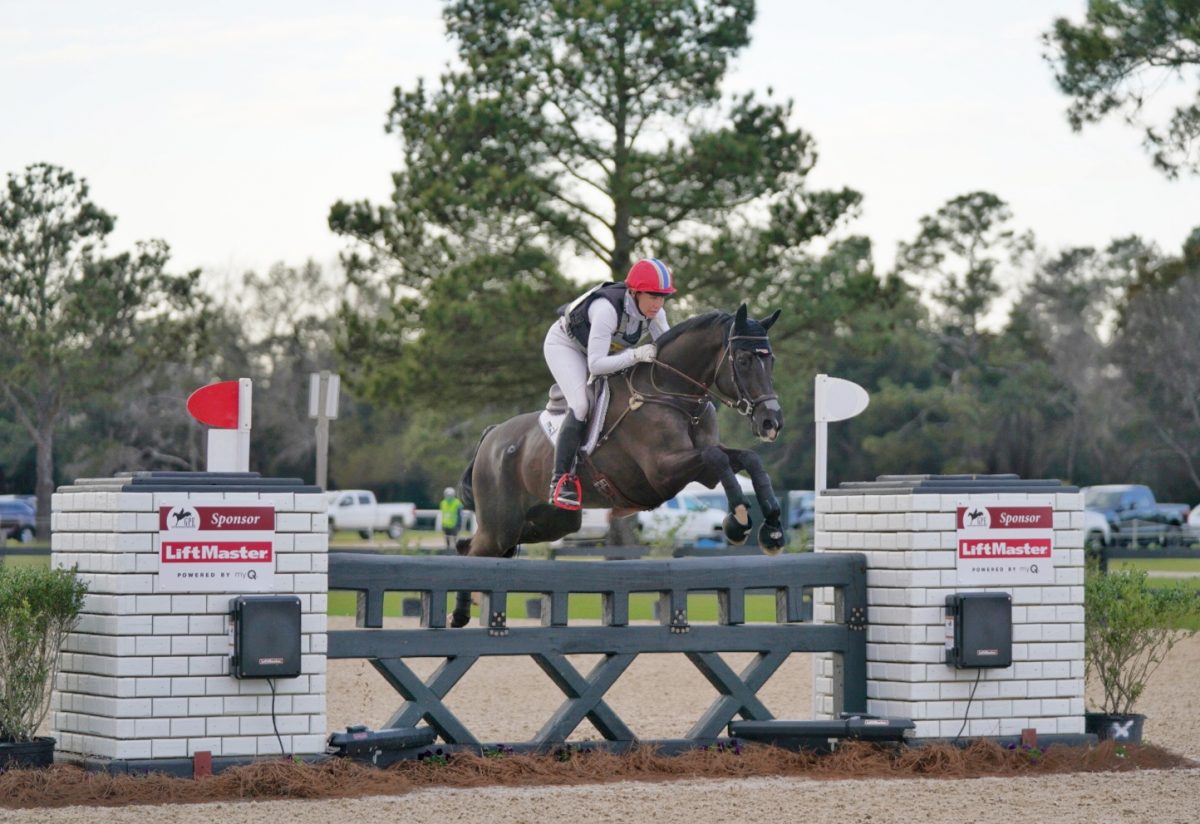 It came down to six seconds when all was said and done. A thrilling day of shortened cross country at the $50,000 Liftmaster Grand Prix Eventing at Bruce’s Field brought us down the order in reverse order of standing, building pressure on overnight leaders Tamie Smith and Mai Baum. After second-placed Liz Halliday-Sharp and Deniro Z collected a handy clear round, Tamie Smith – who has been working out of Ocala this off-season – had six seconds of time in hand to seal the victory.

And she may have needed it – the 15-year-old jet black German Sport Horse gelding Mai Baum, owned by the Ahearn family and Eric Markell and first discovered by Michelle Pestl, was impressed by the twisting, technical track set by Captain Mark Phillips early on. “Wild” was the term Tamie used to describe “Lexus”, whose answer to a question he’s unsure about is to just try harder. But Tamie knows the gelding like the back of her hand, and as they continued to tick off the questions you could see the horse responding in kind to her quiet insistence that he just keep going. In the end, they wouldn’t need the six seconds, finishing inside the time allotted of 3 minutes and 49 seconds to officially win the event on a final score of 23.3.

It’s been a long road with Mai Baum, who splashed onto the East coast scene in commanding fashion to win the then-CCI3* USEF National Championship at Fair Hill in 2015. All was set to make a bid for the U.S. team traveling to the 2016 Olympic Games in Rio de Janiero, but it was not to be as the gelding suffered a tendon injury that took him out of contention. He would make his way back under the careful care of the Next Level Eventing team out of Temecula, Ca., eventually partnering with Tamie at the 2019 Pan American Games in Lima, Peru and finishing 11th at Boekelo later that year.

We’ve long been waiting for “the black stallion” to make his CCI5* debut and we very well may get our wish this year: Tamie says Mai Baum is slated to head to Kentucky, along with stablemate En Vogue, owned by Ruth Bley. 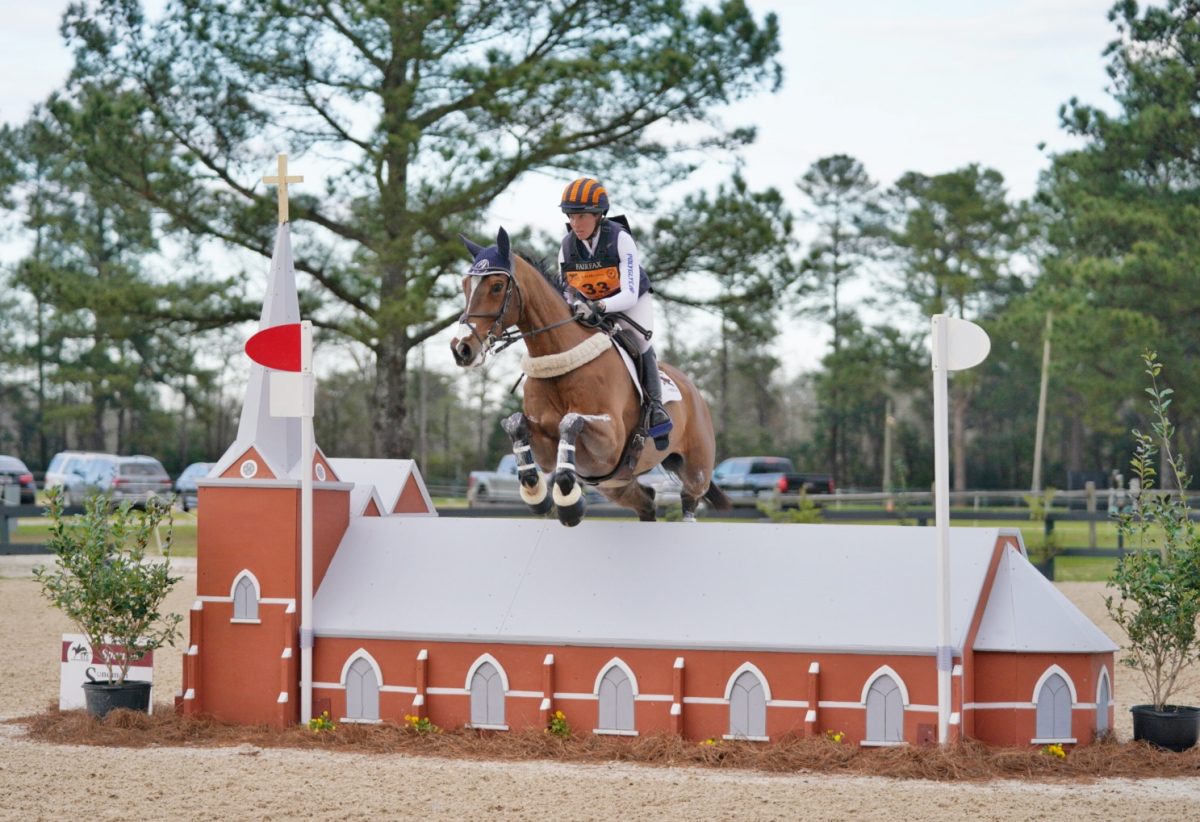 Finishing second, third, and fifth and pleased with all of her rides today was Liz Halliday-Sharp, who won this event twice in a row in 2019 and 2020. “I’m not disappointed to finish all my horses in the top five,” she told Frankie Thieriot Stutes after her ride aboard Deniro Z. “I’m happy for Tamie that she came over here and had a great run.”

Liz ends her weekend with Ocala Horse Properties’ Deniro Z in second on a 25.8, Deborah Halliday’s Fernhill By Night in third on a 28.4, and Ocala Horse Properties’ Cooley Quicksilver in fifth on a 30.0. Splitting the difference in fourth place is Boyd Martin with The Long Island T Syndicate’s Long Island T, who cruised around with three seconds of time to finish on a score of 29.5. “I was thrilled with all three of my guys today. It’s a twisty, turny course with a few accuracy courses and the first run of the year and I’m pleased with all three of them,” Boyd reflected after his last ride. Boyd also finished Luke 140 inside the top 10, ending the weekend in ninth with a score of 31.5.

Buck Davidson told Frankie Thieriot Stutes that his last trip to the Grand Prix Eventing with Cassie Segal, Lisa Darden, and Natalie Sandler’s Erroll Gobey, a Holsteiner gelding who is 11 this year, was tougher and says the horse has really grown into himself to feel much more confident for this attempt. “He’s really growing up and did it easily,” he said. This pair ends their weekend in sixth place on a 30.6.

Doug Payne also enjoyed a fruitful weekend, collecting just one second of time among his three rides. Doug and Jessica Payne’s Quantum Leap ends the weekend as the highest placed Payne horse, finishing seventh on a 31.1. He’s closely followed by stable mate Starr Witness, owned by Laurie McRee and Catherine Winter, in eighth on a score of 31.2. Debi Crowley’s Vandiver finished his weekend on a double clear cross country, in 12th on a 33.2.

In all, we only saw a couple of issues pop up on course: Clayton Fredericks parted ways from FE Stormtrooper at the big Aiken Post Office corner, fence 9, and Tamie Smith popped off her first ride, Danito, at fence 11, the Battle of Aiken Cannon. Both horses and riders looked to be no worse for the wear after the mishaps.

The time proved to be a formidable test, and riders who didn’t set out with the rockets burning weren’t likely to catch up on the clock by the end. Generally speaking, the course rewarded really positive riding – second-guessing a distance could prove consequential on the leaderboard as a few pairs found out. A total of nine riders collected double clear efforts, making for a 27% double clear rate for this year’s course. This makes for a tougher track on paper than years past: 2020’s Grand Prix saw a 54% double clear rate and 2019’s had 63% of cross country starters jump double clear.

You can view the complete listing of final scores here and catch up on our live updates from cross country here. We’ve really enjoyed following along with this exciting showcase of eventing each year and thank you for being here with us. Our gratitude goes out to all the organizers, officials, volunteers, grooms, and riders who make these events possible – it’s truly a team effort! Go Eventing.