There’s something about Tattersalls. Even when the wind is blowing – and boy, is it blowing – and a cluster of foreboding clouds jostle for prime position over the main arena, it’s possessed of a (blustery) air of good sport and great craic. Plus, frankly, it’s just rather pretty.

With yesterday’s CCI4*-L competitors enjoying a well-earned break, our focus today shifts over to the CCI4*-S. Though the entry list has shrunk down to just seventeen competitors, it’s a classy field chock-full of experienced five-star combinations and red-hot up-and-comers. 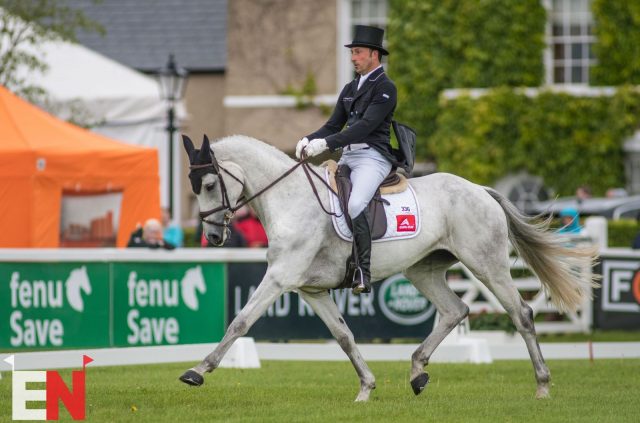 If you’d wanted to place a bet on it beforehand, though, you’d have been hard-pressed to get any odds worth emptying your wallet for. Tim Price becomes our newly-minted World Number One tomorrow, and to say that our reigning Burghley champion is on form would be to utter an egregious understatement. Here at Eventing Nation, we really only deal in overexcited hyperbole. But although we could wax lyrical about Tim’s achievements all afternoon, we have to make note of Ascona M, too. The eleven-year-old Holsteiner mare (Cassaro Z x Naomi IV) is still a relatively new ride for Tim; he first took the reins in 2017, when wife Jonelle was sidelined on maternity leave. Then, the fiery mare went back upon her return – but mid-way through the 2018 season, Jonelle decided to let Tim take over again. Since then, the pair have been on the up and up – they scored a hugely competitive 25.3 at Pau, although an unfortunate stumble after an exuberant jump into the water put paid to their campaign. Today, they very nearly equalled it, putting a 25.9 on the board to take the lead by a significant margin.

“She’s such a quality mare; she’s a winner at home every day of the week. But saying that, she can be radical as well, being a lovely … mare,” Tim says with a grin. Today, though, ‘Ava’ kept her opinions to herself, fairly floating around the arena as we saw her do in her five-star debut at Pau last season. Though she stands a fighting chance here, it’s not a major goal: instead, it’s all useful preparation for her return to the top level at Luhmühlen.

“That felt like a really good thing to have in the back of my head – the fact that she was rideable, the fact that she stayed in front of me, and the fact that she just went through the motions. She’s feeling the best she ever has this year, especially as this is the first season I’ve had from January. I think that’s really benefited us.” 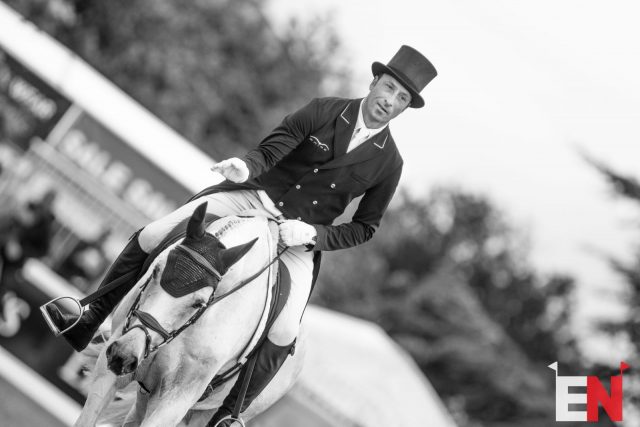 Occasionally radical: Ascona M is on best behaviour to take the lead with Tim Price. Photo by Tilly Berendt.

The primary benefit of this extra time together is manifesting itself in the mare’s rideability. Although Ava is a naturally elegant mover, and though she seems to find the work incredibly easy, it’s not a push-button job to produce the goods.

“She’s sensitive and a little bit outrageous,” explains Tim. “Her reaction to something she detests is big. For example, with the flying changes, she can claim that she never saw that aid coming, and what the hell were you thinking?! She’ll throw herself into the air, and there’ll just be legs everywhere. So you say, okay, no worries girl, and a couple of minutes later, she’ll do them perfectly. I won’t have done anything different, but she’ll have taken it better. I have to be the diplomat in the relationship!” 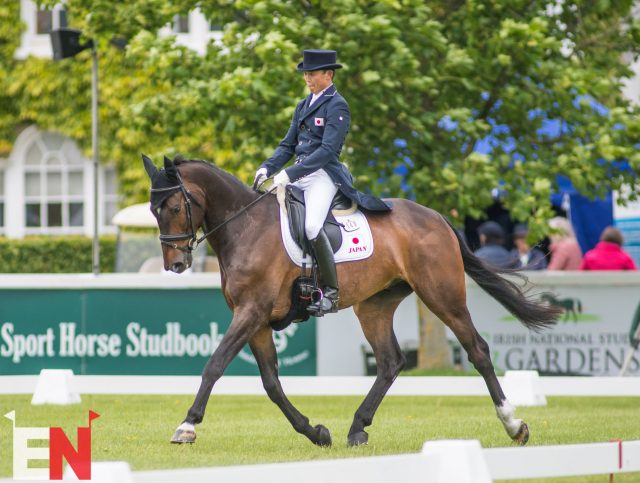 After clinching overnight third place in yesterday’s CCI4*-L class, Japan’s Kazuma Tomoto returned today firing on all cylinders. This time, he rode new mount Vinci de la Vigne JRA (Esterel de Bois x Korrigane de la Vigne), the ten-year-old Selle Français with whom France’s Astier Nicolas finished seventh at last year’s World Equestrian Games. Vinny was purchased by the Japan Racing Association at the end of last season as part of the country’s quest to take top honours in next year’s Olympics – and though it’s a new one, the partnership has been quietly impressive so far. Kazu and Vinny finished sixth and second, respectively, in three-star competitions at Belton and Ballindenisk, and though this will be their debut four-star together, they’ve started it in a competitive position.

Their score of 29.8 might seem a long way behind that of the leaders, but the margin of 3.9 comes a hair’s breadth away from giving Tim a rail in hand going into tomorrow’s competition. Now, he’ll need to make sure all the poles stay up if he wants to hold his lead while Kazu, whose overarching goal is to qualify his four horses for next year’s Games, can focus on the task at hand without feeling an enormous amount of pressure. 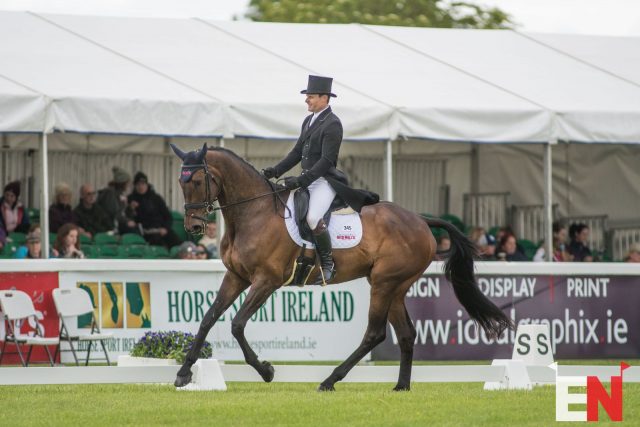 Alex Bragg and debutante King of the Mill. Photo by Tilly Berendt.

He may well feel some from his nearest rival, though. Alex Bragg and Zagreb (Perion x Renera) sit just a tenth of a penalty behind Kazu and Vinny on a score of 29.9, giving Alex early momentum in a class in which he has three horses entered. Michael and Naomi Roe’s King of the Mill (Stormhill Miller x Ballycanew Queen) sits in ninth place overnight on a score of 36.1, while Lucy Nelson’s Hester succumbed to the vibrant atmosphere in the main arena and waits in the wings on 41, putting her in 13th place.

“Zagreb was great, actually – I’ve been trying to wait for the summer, but I seem to be following this wet, breezy weather around,” joked Alex whose top horse, much like one EN reporter, performs at his best in milder weather. “He had a little spook at the camera at the end of the arena in the counter-canter work, which was a shame, for one small mistake – but other than that he was super, as always.”

Though Zagreb – known at home as Rhett – is the much-deserved subject of our endless poster-boy adulation, it’s exciting to see Alex methodically building up a great string of up-and-comers. Both of the younger horses entered in this class are level debutantes: nine-year-old King of the Mill has just three international runs under his belt, while eight-year-old Hester has five, though she racked up considerable international showjumping experience with her prior rider Jonelle Price. 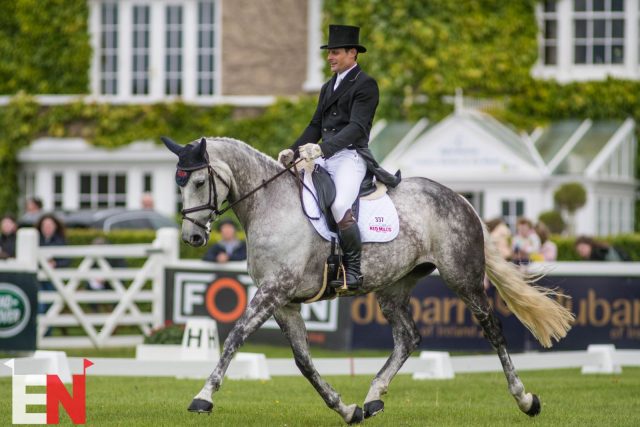 “I brought them over here for the cross-country, actually – I know it’s big and bold, and Ian Stark always builds it that way, but I’ve always felt that horses come back from it feeling really confident, and then they go on to do well through the year,” explains Alex. “The main arena, too, has enough of an atmosphere that it tests them out a bit and gives them some experience there. Hester is a young eight-year-old, and she got a bit lively – she has a bit of a history of that, and it did, unfortunately, tip her over today. King of the Mill has always been a bit of an anxious horse, but he’s gone in there and been incredibly professional. He’s very Thoroughbred-y, so he lacks some of the softness of movement of some of the cross-bred horses that are more expressive, but his main feature is his gallop and his stamina. This is a stepping stone for him, hopefully, to go onto bigger things this year and next. They’ve been fantastic so far, and it’s wonderful to be here.”

A trio of British women hold fort in the middle of the top ten – Tina Cook and Calvino II sit in provisional fourth place on 30.5, while Millie Dumas makes it a second top-ten appearance in as many days, this time riding KEC Deakon. They sit in fifth on 31.3. Less than a penalty and a half behind them, Mary King and her homebred King Robert lie sixth, posting a 32.7. 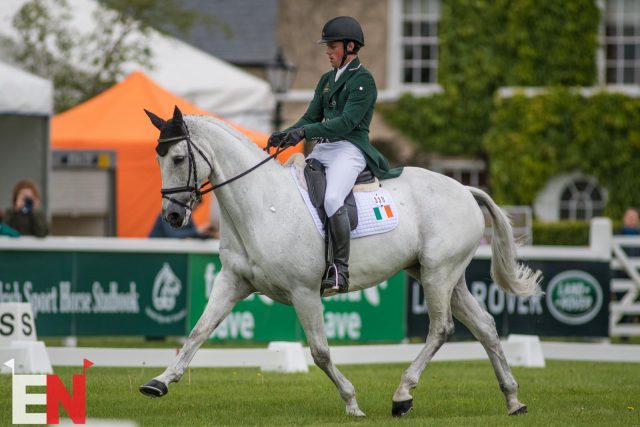 EquiRatings’ big boss Sam Watson is the highest-placed Irish rider in the class, squeezing both his Luhmühlen-bound horses into the top ten. His Ballindenisk winner Imperial Sky leads the way, holding seventh place on 33.8, while the striking dun Tullabeg Flamenco rounds out the top ten on 37.9, just behind lone French representative Arthur Duffort and Toronto d’Aurois.

The CCI4*-S field looks ahead to showjumping next, which commences at 6.15 p.m. BST/1.15 p.m. EST tomorrow, while the CCI4*-L heads to Ian Stark’s beefy cross-country track at 2.50 p.m. BST/9.50 p.m. You can keep an eye on all the action as it happens through Tattersalls’ live-stream, and we’ll be bringing you all the juicy insight after the fact, right here. Go Eventing!

The top ten after dressage in the George Mernagh Memorial CCI4*-S.