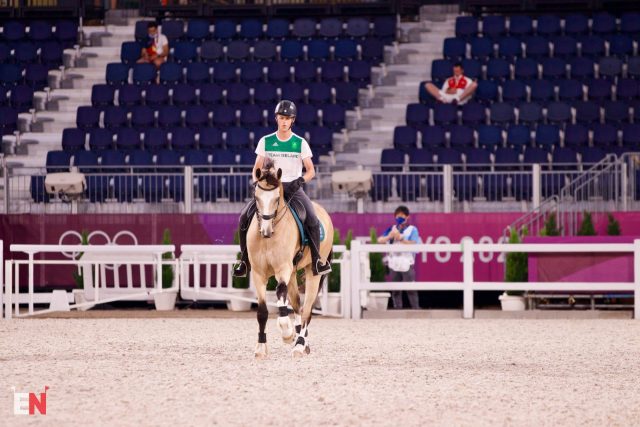 With just over twelve hours to go before the first horse inspection, we’ve been treated to our first look at how this week’s competition could play out for our teams out in Tokyo with the release of the drawn order of nations. The 15 teams will compete in the following order:

Each team will send riders out in groups – that is, one rider from each team will come forward first in a team trailblazer role, and then we’ll cycle through the second batch and finally the third ‘anchor’ riders. Individual competitors will be sprinkled throughout this order of go.

There are, of course, benefits and drawbacks to certain draw positions. We’re looking at early and late draws for the two teams likeliest to battle it out for the gold medal: Great Britain will send a rider out in second draw, while Germany holds down the fort in the second-to-last draw position. Going early can give teams the chance to set a formidable pace and put pressure on later combinations; equally, teams drawn early will have less information to work from about how the cross-country course is riding on Sunday. Then, there are tactics to be considered within the team: the roles of the team trailblazer and anchor are quite different, with one sent out to fact-find on course and the other required to save the day with top-tier performances. Of course, all three riders will be equally crucial in this new format, which sees us proceed sans drop score, so every ride matters.

We’ll have a better idea of how each team will be tackling their own rider order on Thursday, when we can expect dressage times to be released. For now, though, we’ve got the drawn order for the first horse inspection, which will take place at 9.30 a.m. Tokyo time on Thursday (1.30 a.m. BST/8.30 p.m. Wednesday Eastern time).

For now, we gather from the chef d’equipes that the rider order within the teams isn’t the confirmed ridden order – and, unfortunately, the jog itself won’t be live-streamed. We’ll be bringing you live updates on Twitter and Instagram throughout, plus a full gallery, report, and extra content as soon as it wraps.