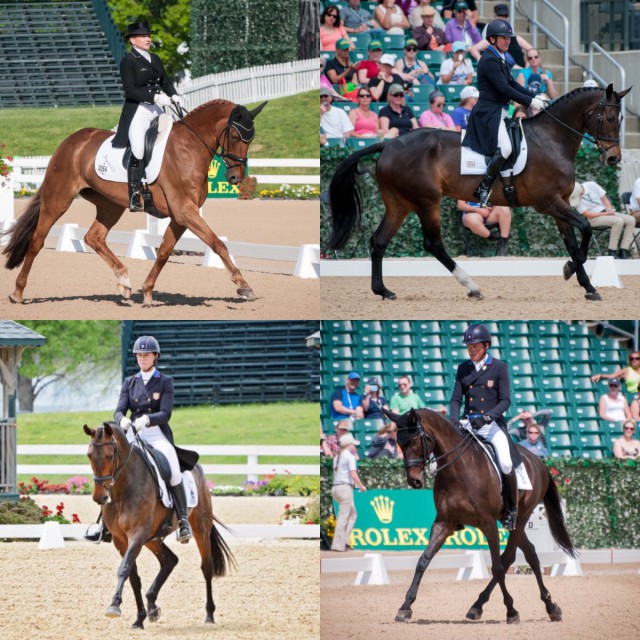 The Team Challenge encourages friendly competition and the team members were selected based on their current FEI World Ranking. Two teams consist of mixed nations as well. The five teams competing this weekend are as follows:

At the conclusion of the first phase of competition, it’s team USA in the lead on a total penalty score of 131.0. After solid performances in the low to mid-40s for all four team members — who are also stalwart and gritty cross country competitors — they should be feeling fairly confident heading into tomorrow.

Team New Zealand isn’t far behind the Americans, they’re just 8 points in second place on a total score of 139.0. The Kiwis are formidable forces on cross country, so don’t deal them out of the running for first place just yet. Between the number of Olympic medals between them all, I’d say this should be a treat to watch tomorrow.

In bronze position after dressage is Team Canada, and once again there’s a wealth of experience on this team. One rookie, Lisa Marie Fergusson, is on the Canadian team as well, and we’ll be looking for safe and clear yet competitive rounds from this bunch.

We’re also in the midst of our Dubarry Rolex Fantasy League, where we’re pitting Buck Davidson and Kyle Carter against each other in an epic match game. Here are how Team Buck and Team Kyle are faring after dressage:

It’s splitting hairs to decide who has the better shot on cross country tomorrow. Buck has a narrow lead but I suspect things may very well change at the end of the day tomorrow. We will find out soon enough!