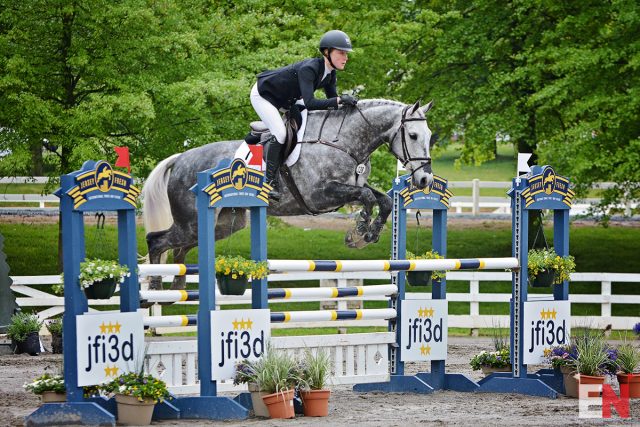 Katie Lichten and Sapphire Blue B. Photo by Jenni Autry.

Following the final selection trial at Groton House Farm H.T., Area I has announced the riders, horses and grooms that they will be sending to compete at the 2018 FEI North American Youth Championships (NAYC) Three-Day Event.

“This team in particular is a really cool group. There’s a wonderful dynamic and cooperative nature among them,” says Brenda Jarrell, Young Rider Coordinator for Area I.

Area I’s one-star team took home the top podium placing in 2016 under the tutelage of longtime coach Mikki Kuchta. In 2017, Buck Davidson took over coaching duties and the combined Area I/IV two-star team brought home gold. They’d love to return to the podium this year as well, and while they remain competitive, the primary focus has been on creating team camaraderie and community service.

“The whole goal for Area I is to focus on the team. NAYC is a wonderful opportunity to get an idea of what it means to compete on the team and this group has really embraced that. They all bonded during our Acts of Kindness fundraiser, volunteering, and our stall cleaning fundraiser,” Brenda says. “They are a wonderfully hardworking and very integrated group. It’s one of those teams where you get the feeling they make each other better and bring the best out of each other.”

Area I will be sending a total of six riders and seven horses out to Rebecca Farm in Kallispell, Montana July 18-22. Buck Davidson is returning for a second year to coach the Area I team. He is joined by Head Groom and Chef D’Equipe Kathleen Murray. Six Young Rider grooms —Penelope Giesen, Tove Goldstone, Gillian Maynard, Libby Scruton, Emma Stiller, and Allie Webster — have been selected to join the team in Montana and will be instrumental to the success of the horses and riders. 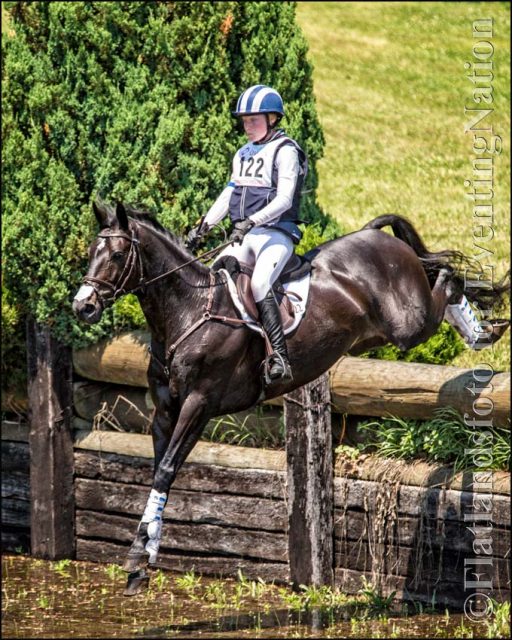 Katie Lichten, 19, and RF Luminati, a 12-year-old Hanoverian gelding, stepped up to the two-star level this winter at Pine Top and followed it up with a completion of the CIC2* at Jersey Fresh this spring. They most recently won the Intermediate/Preliminary division at Groton House Farm this past weekend. This will be the pair’s third trip to NAYC, having previously competed on the one-star team in 2015 and again 2016 as a part of the gold medal-winning team.

“I am beyond excited to be ale to compete at Young Riders again this year,” says Katie. ” I can honestly say that my past two experiences at Young Riders were the two best weeks of my life. Being a part of an amazing team of dedicated riders, grooms, coaches, parents and supporters was incredibly fun and rewarding. We have another outstanding team this year that I am honored to be a part of.”

Katie will also be riding Sapphire Blue B in the two-star. The eight-year-old Irish Sport Horse was campaigned to the two-star level in Europe by Ellen Svennerstal before being imported by the Lichtens last year. The pair won the CIC1* at Pine Top early this spring followed by strong finishes in the CIC1* at Carolina International in March, Intermediate at Fair Hill in April, and the CIC2* at Jersey Fresh International. 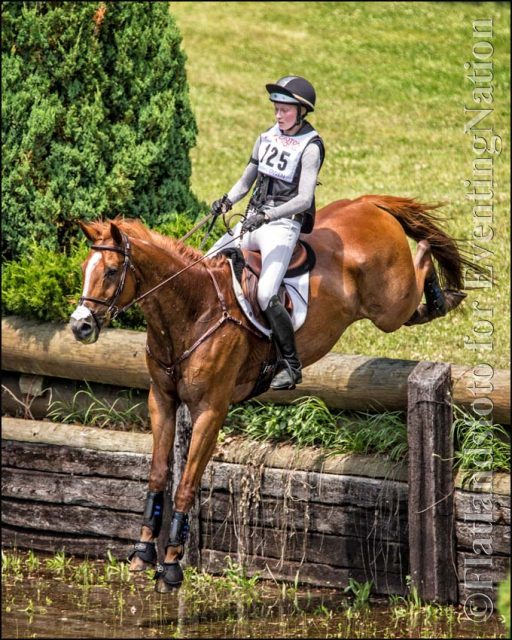 No, you’re not seeing double — Area I has twin two-star riders! Maddie Lichten and her horse Yarrow will be representing Area I in the two-star alongside her sister. Maddie was also a part of the gold medal-winning one-star team two years ago and is now returning for her second Young Riders appearance. Maddie and Yarrow, an 11-year-old Canadian Sport Horse bred by Kelly Plitz and previously developed to the CIC2* level by Waylon Roberts, took home a win in the Open Intermediate division at Chattahoochee Hills H.T. before a successful move-up to two-star at the Virginia CCI/CIC & H.T. this May.

Katie and Maddie originally hail from Hamilton, Massachusetts and have both most recently been training with Allison Springer. They will be heading to Davidson College in North Carolina together in the fall. 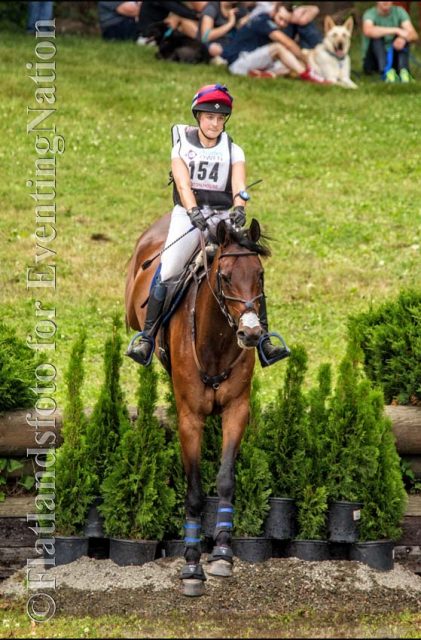 Fifteen-year-old Sami Crandell will be making her NAYC debut riding Fernhill Chaos, a 10-year-old Irish Sport Horse gelding. Coach Buck Davidson is already a familiar face to Sami, who trains with him routinely. Sami made her Preliminary debut last summer on another horse, Sweet Baby Kaz, before taking over the ride on Fernhill Chaos later that year. The pair finished fourth in a very competitive CCI1* at the Ocala International 3-Day Festival of Eventing this April.

“It is an honor to represent Area 1,” said Sami. “I am beyond excited to be competing alongside such talented team members. I look forward to competing at Rebecca Farm and hopefully having our hard work pay off!” 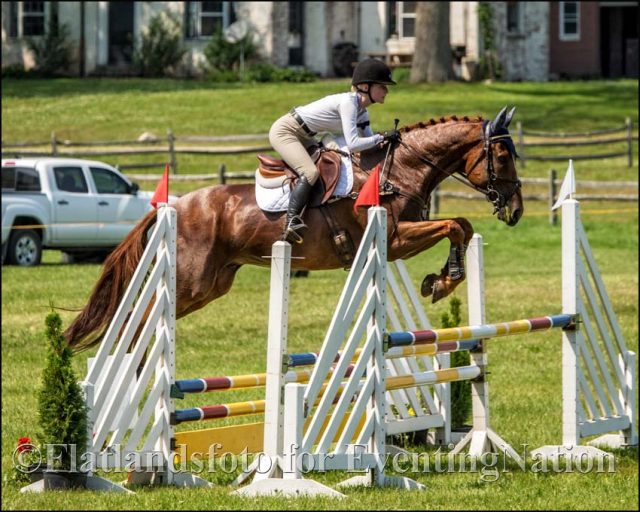 India Doyle, 17, of Beverly, MA stepped up to the Preliminary level at the GMHA Festival of Eventing August Horse Trials last year and hasn’t looked back. She earned her one-star qualification at the Ocala Jockey Club 3-Day International Event adding only one rail her dressage score in highly competitive the CC1*. Her own Little Oliver is a 16-year-old OTTB who was previously developed to the CIC3* level by Babette Lenna. India trains with Ferial Johnson out of Oakwood Equine/Ledyard Farm. 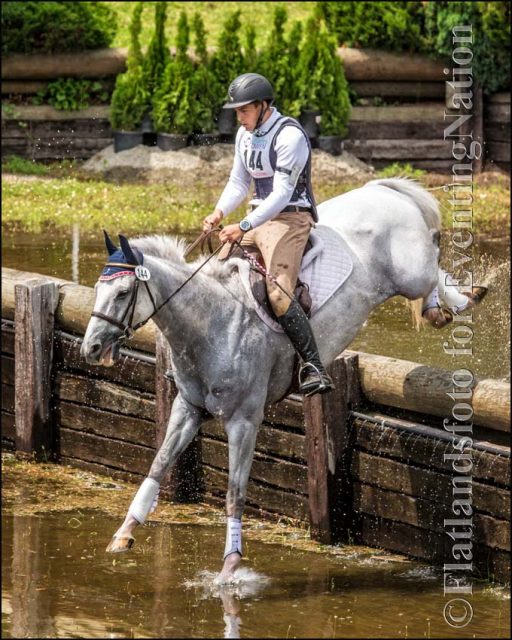 Will Jarrell and Grey Area. Photo by Joan Davis/Flatlandsfoto.

Will Jarrell, 17, and his 12-year old Irish Sport Horse gelding, Grey Area, will be representing Area I on the one-star team for the second time together, having also been named to the 2016 team. Grey Area will actually be making his third NAYC appearance, having taken Margaret Schaeffer to a sixth place finish in the CH-J* in 2014 before then being developed to the two-star level by Sinead Halpin.

Will trains with Suzi Gornall out of either Uxbridge, MA or Aiken, SC, depending on the time of year, and he made his Intermediate level debut this spring at the Ocala International 3-Day Festival of Eventing, finishing second in the Intermediate Rider division. He’s heading into his senior year of high school at Buckingham Browne & Nichols School in Cambridge, MA this fall and will be starting the college application process.

“It’s really an honor to be able to have the whole experience a second time, and I’m just thankful for all the people that have helped me get there!” said Will. “I’m looking forward to being in Montana again, and I’m very excited to be with a team again because to me that’s one of the best parts about the whole experience!” 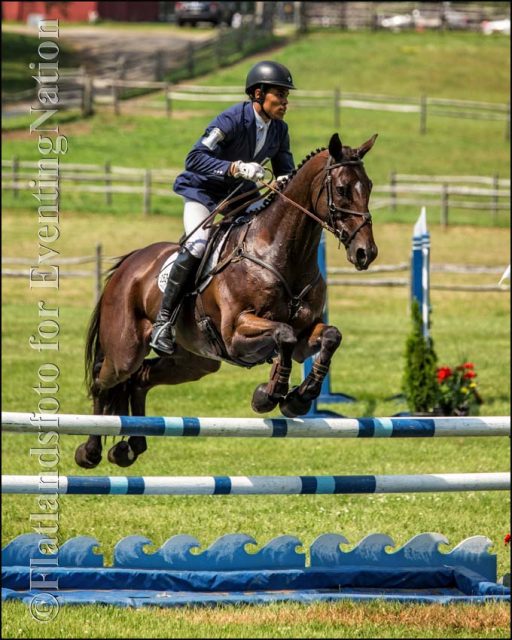 Rounding out the CH-J* team is Kanyon Walker, also 17, who resides in Leesburg, FL and trains with Jennifer Holling. Kanyon is a multi-talented athlete — in addition to riding, he also plays football and is hoping to securing a college scholarship. Kanyon and his horse Kenneth Street have climbed the levels together the pair made their one-star debut this spring at the Ocala International 3-Day Festival of Eventing.

Many thanks to Area I’s super photographer Joan Davis of Flatlandsfoto for the wonderful pictures!

Go Area I and Go Eventing!