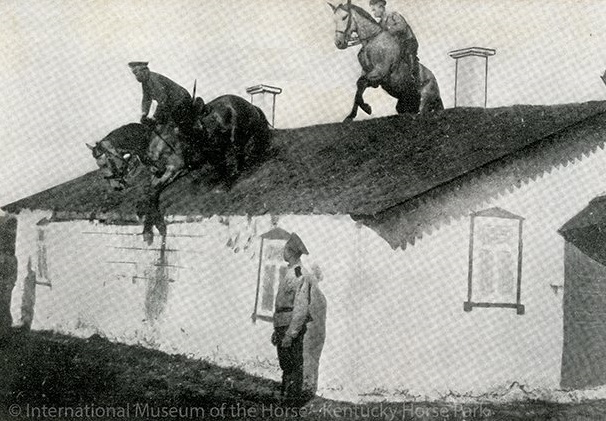 “Red on right” and “white on left” are relatively new developments in the history of cross country riding. “Insanity in the middle,” on the other hand, is a centuries old tradition. And nobody did insane better than old-school cavalry riders.

I’ve made a case for this before on multiple occasions. If you’re into vicarious thrills, check out my roundup of terrifying cavalry jumps as well as this account of the military only 1936 Berlin Olympics eventing competition, a true survival-of-the-fittest affair.

Cavalry riders underwent intense training, and by “intense” I mean “deathwish-esque.” I thought all you modern-day crazies out there might enjoy a highlight reel of some of the zanier exercises. Maybe you can incorporate them into your own winter training program! (Just kidding: Do NOT try this at home.)

Let’s kick the series off with some down banks. 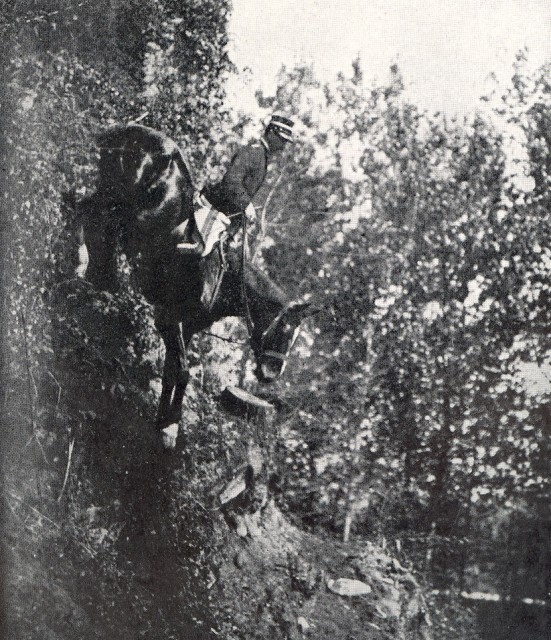 Every officer of the Italian Cavalry School in Pinerolo was required to go down “the descent of Mombrone” before they left the school. The 20-foot drop from the window of a ruined castle about three miles from Pinerolo was considered a test of nerve. Source: lrgaf.org

How do you train a horse to agreeably slide off the edge of the earth? I suppose, like anything else, you start small. A nice civilized staircase, perhaps, as demonstrated in this 1920s video from the Prelinger Archives. Thank goodness we have since invented brushing boots.

Next, move on to a steeper, more rustic grade, as seen in this excerpt from a 1914 video of U.S. Army Cavalry training exercises at Fort Crook, Nebraska, courtesy of Critical Past.

Once they’ve mastered the bum-scoot technique down, you can start adding speed. Going downhill fast! (Har-har.) From the Prelinger Archives:

And, this 25-foot plunge via the US Cavalry:

.Next, incorporate a water element. From the Prelinger Archives:

Soon, with proper training, your horse will be fully trained to leap enthusiastically into any treacherous abyss. From the Prelinger Archives:

Stay tuned for more inadvisable training tips courtesy of the godfathers of our sport. Go Eventing!