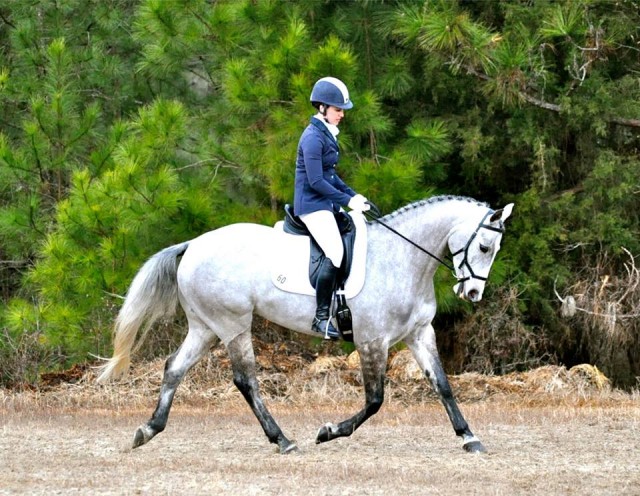 I’ve made it down to Aiken this year, and while the weather isn’t always as exciting as one imagines in theory, the horses that have joined me down here certainly are. I’ve got four horses in training this year, plus two young horses in the barn who are with my friend Carrie Meehan, who has joined me for a bit of fair weather training away from her home in Kansas. We have just about every horse on the spectrum, from a totally green 3-year-old to Nyls, who is tackling his fourth season of Advanced.

We have Muskogee, a homebred Oldenburg whom Carrie is training to understand woah, go and turn. Hopefully he will start hopping over small poles this month. Jenny Furlow’s young Thoroughbred Cherished Friend (Buddy) is starting his first season of competition, but he’s been in training with me for several months and is pretty well prepared for Beginner Novice and Novice. My big horse, Leo, will also be contesting his first Beginner Novice, but after a long winter of terrible weather and inconsistent work, he is probably less prepared than Buddy. Carrie has another horse, Cavalier (Rusty), who won the 2013 AECs at Novice and has the ability for more but spooked himself at a Training level water last year. My newest ride is Absaluut Annabelle, a coming six year old Holsteiner mare who has been hopping around Training without much problem, but needs to refine her methods for a move up to Preliminary.

All of these horses are in transition periods, whether it’s toward their first competition in Eventing or toward a potential move up and a decision about their future in upper-level competitions. One of the hardest decisions with young horses is knowing when and how to treat them like the babies that they are in relative terms and when to ride them like adults and ask them to step up to the plate. You want to always make sure that you don’t over-face them and either spook them permanently or kill their enjoyment by making them do too much work too quickly.

Dependent upon personality, ability, and natural aptitude for the sport, some horses progress quicker than others, but eventually most horses have to have a “make it or break it” talk with their rider. Is this going to work in the long term? Is this horse really suited for the job you want it to do? How and when do you test that and confidently determine the answer? 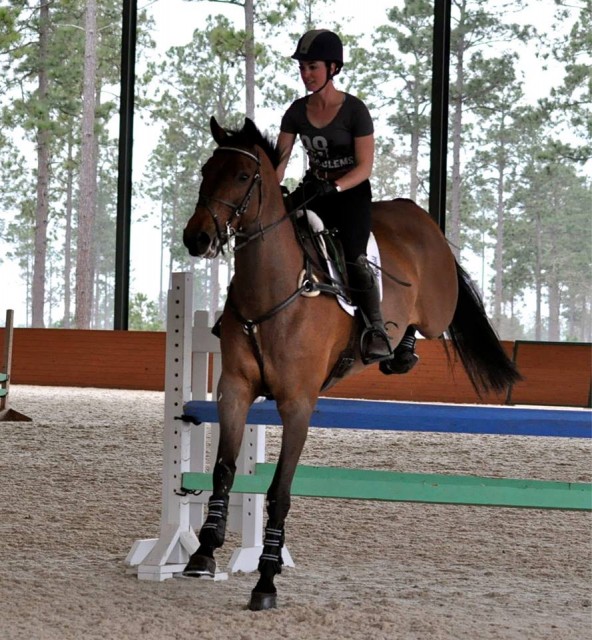 Nyls schooling in a lesson with Kim Severson at Stable View Farm. Photo by Carrie Meehan.

Yesterday we had a breakthrough with Carrie’s horse, Rusty, who had a bad experience at a water jump at Training level last spring. As a 5 year old, Carrie worried that she was pushing him too far and dropped him back to Novice level. Since then, he has completed two more Training events without a problem, but Carrie still feels that jumping into water is iffy with him, so she’s been proceeding with some caution. However, with this horse, if you proceed with caution, he reads that as a lack of confidence from his rider and is more likely to peak at the question.

This was the moment when Carrie had to decide: Do I continue to explain it quietly and as though he is a baby, or do I ask him to jump this like an adult and use his experiences to move along with his career? Today was the day. I told her to ride him in a more active canter, with an uphill balance, and ride confidently off the bank into the water as though there had never been a problem, as if she was riding an experienced upper-level horse into the water. And it worked! Rusty immediately rose to the challenge and jumped right off like a big-time horse, returning with his rider sporting a huge grin.

In this instance, it was the perfect time to test the water to see if the young horse would meet the next level when asked. In determining his future ability to move up, it was important to see if he would use her confident approach to get the job done in a definite way, or if he would still dilly dally and possibly chicken out.

In most young horses, I like to try this kind of thing out regularly. It doesn’t have to be over a bigger jump, a more complex question or anything out of their usual realm of possibility. It can be introducing a new way to use their body on the flat, starting at the walk. It can be learning to jump in a new and better balance, or it can be trying out some independence in between the fences. In occasionally throwing them some bigger questions, I’m effectively learning how they will respond to adversity in the future and thus seeing their aptitude for our sport. If nothing else, an event horse has to be one that will grit his teeth, take your confidence and make it his own, just like Rusty did yesterday.