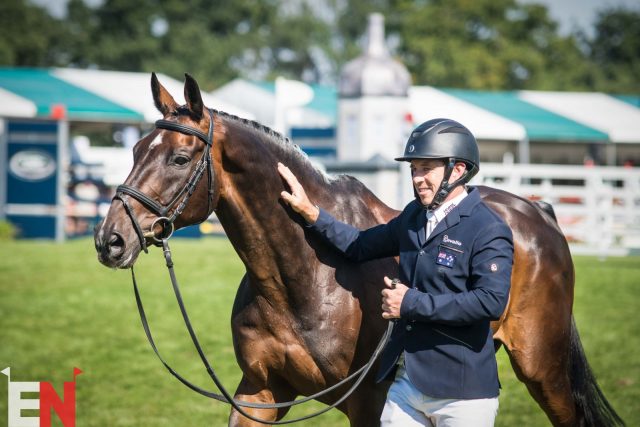 Amidst the high excitement and guts-and-glory savoir faire of Burghley’s final day, there was also a poignant moment: we said goodbye to Sam Griffiths‘ long-time partner Happy Times, who cantered into the main arena one last time, ears aloft to the cheering crowds at his favourite event.

Happy Times (Heraldik x Hauptstutbuch Mandy, by Maraschino) has clocked up a remarkable string of achievements in his long and storied career, including eleven starts at CCI4* and coveted spots on the Australian team at the London 2012 Olympics and the 2010 World Equestrian Games in Kentucky. 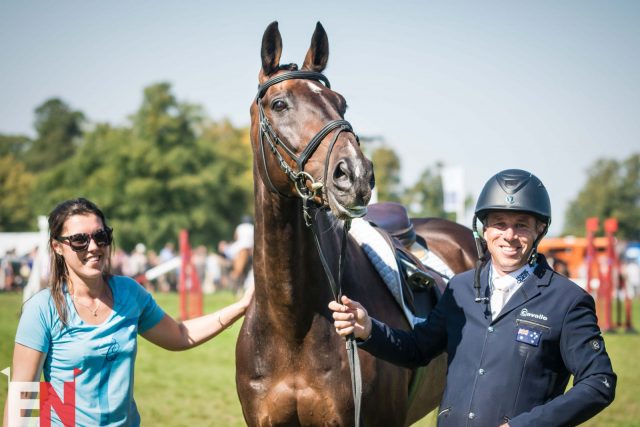 Owned by Sam, Dinah Posford, and Juliet Donald, ‘Happy’ made an auspicious debut into the public’s attention in 2006 with his first major competitive appearance. This was at the Young Horse World Championships at Le Lion d’Angers, where he contested the seven-year-old CCIYH2*, finishing fourth and completing on his dressage score of 44.4 [29.6 revised]. The next year he would step up to three-star, gaining experiencing and demonstrating a remarkable upward curve in his performance, and culminating in a win at Saumur CCI3* in the midst of the 2008 season.

And from there? Well, there was no stopping him: he made the step up to four-star in 2009, finishing third at both Badminton and Burghley, making the time but rubbing a pole at the latter and adding just 0.8 time penalties across the country to his dressage score at the former.

The following year, he won early-season CIC3* classes at Belton and Chatsworth, cementing his place on the Australian team for that autumn’s Kentucky WEG where, unfortunately, their competition would come to an early end on the cross country course. Sam and Happy regrouped, came back out for the 2011 eventing season, and cruised around Badminton yet again, finishing fourth on their dressage score. If once is a fluke and twice is coincidence, three outings at four-star with barely anything — if anything at all — added to their dressage score proved that Sam’s remarkable Oldenburg was, in fact, the real deal. 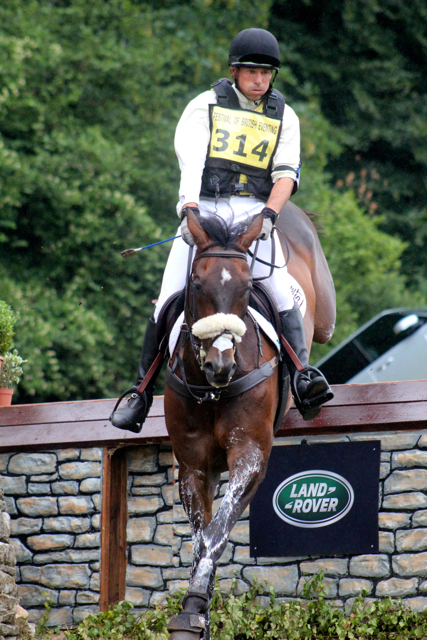 They would finish 16th at Burghley in 2011 before heading to the London Olympics in 2012 — another Championship event that didn’t go quite to plan for the four-star specialist. They rerouted to the next month’s Burghley, finishing an easy ninth, and following it up with 15th and 12th at Badminton and Burghley, respectively, in 2013. 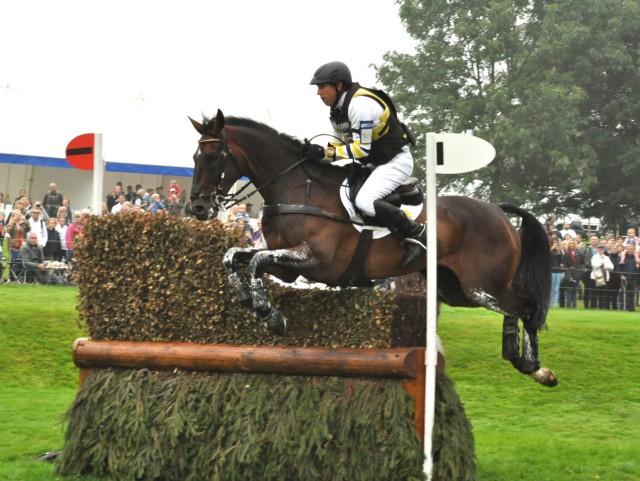 In 2014, they would add another third-place finish at Burghley to their impressive resume. Over the next couple of years they would complete yet another Burghley, as well as clocking up respectable finishes at Blenheim, Barbury, and Belton.

In 2017 Sam suffered a crack in his neck that was discovered after Burghley, and while he opted to take a few months’ break from riding to allow it to heal, he felt that he couldn’t let Happy, then 18-years-old, stand by and lose out on a season. Instead, he drafted in fellow Australian and close friend Shane Rose, who had based himself at Sam’s Symphony Farm in Dorset for the season. Ineligible for the competition’s Event Rider Masters leg by dint of their new partnership, they instead aimed for The Festival of British Eventing’s hotly-contested Advanced section, which they won easily. This season, Happy was lightly campaigned at ERM legs by Sam, enjoying a pressure-free final season on which to end his impressive career. 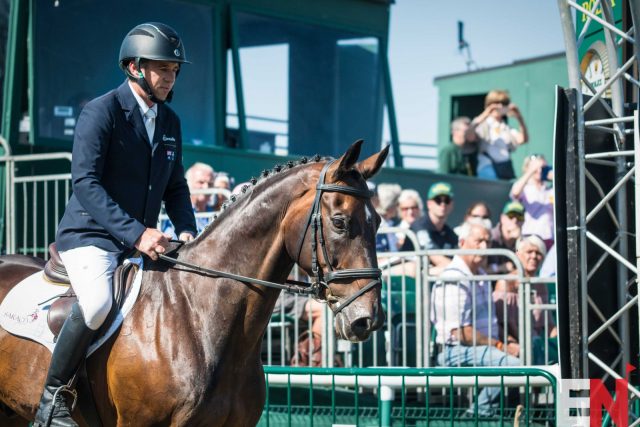 “I’d always planned for this to be his last season, but it wasn’t until my showjumping trainer Ros Morgan suggested Burghley that the idea to do it there came about. She pointed out that it would be a great send off, and it’s true – he competed there seven times and was always a Burghley horse; he always came into his best in the autumn,” says Sam.

Happy, who still looks and feels much younger than his nineteen years, is looking ahead to an active retirement – he’ll be making his show-ring debut in the in-hand and veteran showing classes with Mouse Berry, who groomed for the pair at the London 2012 Olympics, and who’s based just ten minutes from Sam’s Dorset base. 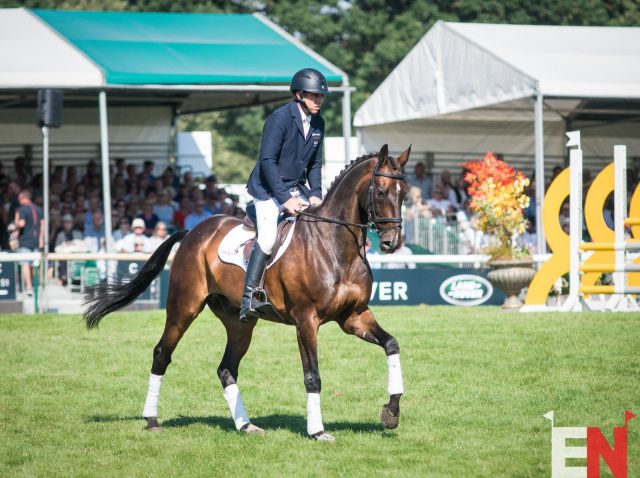 For Sam, riding into the main arena at Burghley was the perfect way to tie his long partnership up with a neat bow.

“I loved him from the moment I saw him,” says Sam, who was contacted by friend and dealer Ruth Wollerton about a young horse he ‘had to see’. “He was just so athletic – you could hardly hear him as he was trotting around the arena. He was always a bit of a star, but he was notoriously hard to train for the showjumping – he was terrified of poles, and would leap over them in the beginning when I tried to do polework with him. But when he came into the ring he really relaxed into it, and he was won of the only horses to jump a double-clear on the final day at Burghley one year. He loved the crowds, and to me he was the perfect event horse: he could move, he could jump, he was always so sound, and he had a great brain.” 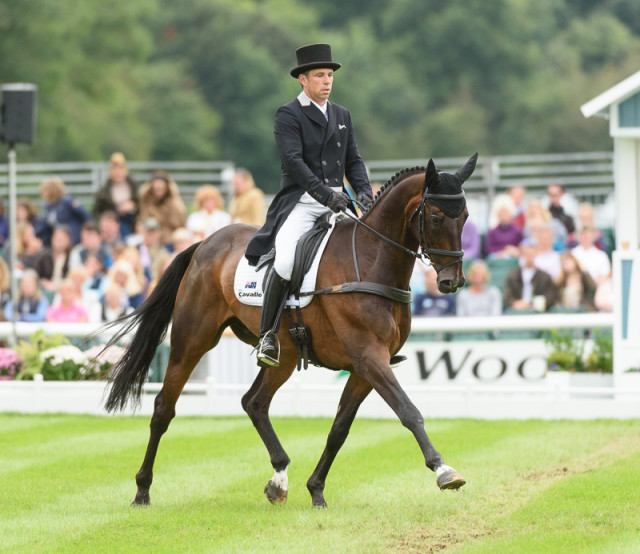 Sam and Happy were joined in the main arena by former head girl Imogen Mercer, who worked for Sam from 2011, just after leaving school, until 2017, and enjoyed forays to many major events with her charge.

“It was a very special day — to be honest, I wasn’t expecting to go into the main arena,” says Imogen. “For me, it was mainly a day for Sam and Happy’s owners, Juliet and Dinah, to celebrate the journey that they’d been on with him, and it was great that they could do that and parade him around one of the events that he’s done the best at in his career.”

“I went to my first Badminton with Happy Times and Paulank Brockagh in 2013, and I was very fortunate to be there at the time when both horses were at the top of their career.” Imogen looks back on Happy and Sam’s third-place finish at Burghley in 2014, upon returning from the Normany WEG with Paulank Brockagh, as a particularly special point in her career. “The Sunday was an amazing day; he’d just gone so, so well all week, and it was amazing to be in the main arena at the prize giving, and to experience that camaraderie between the riders and the grooms. Burghley is just such an amazing event because it’s still got so much hype about it but it’s very friendly, and it’s towards the end of the year so it’s a little bit more relaxed, but it’s still a four-star.”

When you’re working alongside a horse who has made such an event his dominion, a place like Burghley becomes even more special — and it was clear, from the enthusiastic cheering of the gathered crowds that Happy had earned his place in the annals of Burghley history.

“It’s sad to retire him, but I’m just glad I could give him a fitting send-off,” says Sam. “He did so much for me; he was the first horse to really put me on the map and I still love riding him now.”

Team EN wishes Happy a long and, well, happy retirement. Thanks for the memories, old boy. 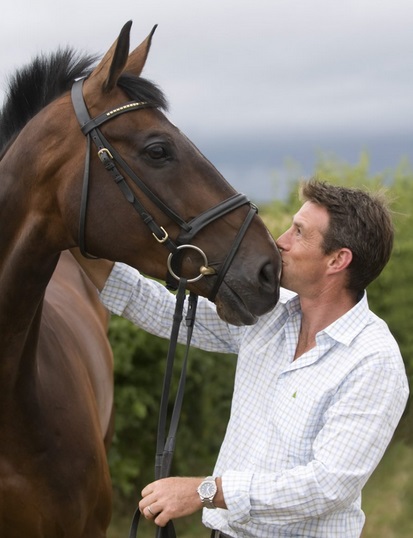