Editor’s note: The finalists in the 6th annual EN Blogger Contest were asked to write a post-Olympic piece as their final entry, and now we are publishing each of their articles on the homepage before opening up voting for the winner. Thanks as always for reading, and please leave feedback in the comments section.

As every armchair horse trials enthusiast knows, when championship-level eventing is on, you need to hunker down in front of the TV with a glass of something cheeky, any resident children ensconced in some dreadful pap-TV for the foreseeable future, and your phone (and partner) switched to silent.

Requiring more stamina than a House Of Cards box set watch-a-thon, the eventing element of the Olympic Games is also a zip code lottery — the availability of your coverage depends not only on what country you reside in, but also what cable channel you subscribe to. Fortunately, being based in the UK with the FreeSat satellite channel, I had access to the BBC’s excellent red button service, and settled down to watch the dressage with a suitable, cool beverage. However, as the tests went on, I unwisely thought it appropriate to invent a drinking game that sees the players Guess The Rider’s Penalty Score. My bold proposition was that for every penalty point you are out, rounded up of course, you take a drink.

‘Guess The Rider’s Penalty Score’ is sure to catch on. Photo courtesy of Kathy Carter.

I had however regained my sobriety for the cross country coverage and was marvelling at the commentary by the UK’s incomparable Mike Tucker and Ian Stark, and enjoying a game of Commentator Bingo. ‘He’s full of running’, ‘He knows his horse’ and ‘The horse ran out of petrol’ were sure to net me a full house on my bingo card, when Mike said: ‘It’s not looking so good for the Germans.’ What? How could this be? The cross country was proving to be incredibly influential, meaning this would be no ‘It was really just a dressage test’ event. 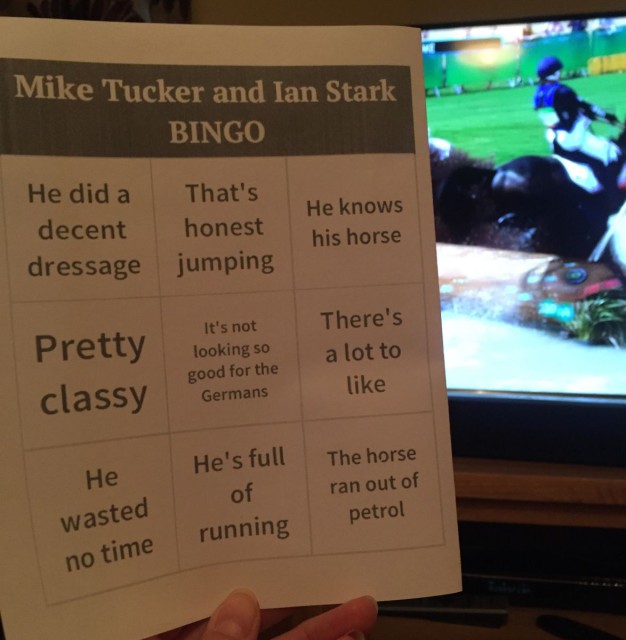 With a Pierre Michelet-designed course that gave the TV viewer travel sickness due to its twists and turns, let alone the competitors, and a very tricky final water complex with a freaky little toad that looked almost impossible to negotiate from the comfort of my sofa, it was exactly the sort of sporting spectacle you’d expect from an Olympic Games. “Sit up, sit up!” yelled my 3-year-old son sagely at Marcio Appel, as the Brazilian scrambled back into Iberon Jmen’s saddle — one of multiple unseatings or falls on the track.

The top 10 positions at the end of cross country day featured some of the most experienced riders across the globe, with the gold, silver and bronze spots staked by the only three riders to finish inside the tight cross-country time. The performance of underdogs Carlos Parro and Summon Up The Blood, who cruised into the top 10 from 16th, was a highlight, and Chris Burton and Santano II were spell-binding throughout. It had been a day of excitement, crushing blows and brave riding.

The two show jumping finales were similarly influential and gave us a true, edge-of- the-seat televisual treat, right up to the final rounds. Watching an emotional Karim Florent Laghouag in tears as the French were announced as the victorious team was wonderful; and Michael Jung’s broad smile as he nailed a faultless individual round was contagious. The final medal positions were richly deserved — this was after all one of the most challenging Games in recent memory — and it was wonderful to see so many enthusiastic spectators at the XC course, and also a convincing crowd in the SJ stands.

While the armchair officionados were using the suitably trendy hashtags #JointheJourney and #TwoHearts to help show engagement for Olympic equestrianism (the TwoHearts hashtag was incidentally the most successful during the eventing segment, with over a thousand being tweeted per hour on cross country day), and doing their bit to support equestrian events ahead of the IOC’s appraisal of the appeal of individual sports, the FEI was enjoying one too many Caipirinhas, and showcasing what is surely the creepiest video ever produced. The ‘Hoofloose’ marketing video, a nightmarish, what-were-they-thinking, what-were-they-drinking affair, was launched as a tongue in cheek look at what horses dream about. But full marks for creativity, and the Monty Python team would probably approve.

To conclude, as the Games have progressed, we’ve had pre-Olympics doping scandals, national equestrian selection dramas that wouldn’t look out of place in a soap opera, and some triumph-over-tragedy personal sagas that have certainly warmed our hearts. (Which all makes the FEI’s lycra-clad, ballet dancing humans with horse heads seem like the most sane part of the spectacle!)

Will we still be here in 2020 to celebrate, commiserate and pontificate our sport’s recent Olympic performance? Rio has demonstrated that horses’ unpredictability massively impacts on medals, something that anti-equestrian observers would say is a good reason for us to go — but I for one sincerely hope that we stay in the Games. 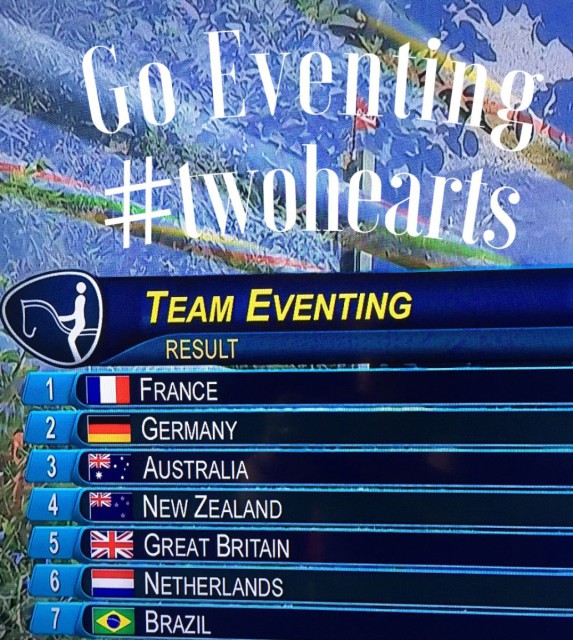 Kathy Carter is an armchair eventing-enthusiast, Mum, business owner and writer. Based in the UK, she owns a talented Irish Sports Horse that is in recovery from a serious illness, and whose mission in life is seemingly to bankrupt his owner and eat her out of house and home. Kathy worked with horses as a riding instructor and groom in a former life, including grooming for a Dutch Olympic eventer, before seeing sense and pursuing a career in media. She has a penchant for post-child’s bedtime Merlot, and a ’70s soft rock habit.