As someone who has seen the jam band Phish an embarrassing number of times in concert, I have long been a devotee of Will Coleman’s World Equestrian Games mount Tight Lines, AKA “Phish.”

“I was really into Phish when I was younger,” Will told us a while back. “I love music and most of my horses are band- or music-related names. And he just seems kinda like a groovy dude so we called him Phish.” (Fun fact: Will’s three-star mount Off The Record is named after a My Morning Jacket song.)

For years I have been threatening to pen an ode to Tight Lines comprised of Phish lyrics, completely unintelligible to all but approximately <0.004% of our readership. And with Will and Phish representing Team USA in the WEG this week, the time is now.

The following ode to Will and Phish is embedded with references to about 40 Phish songs, a fraction of the band’s enormous catalogue. Apologies in advance to 99.996% of you reading. This one goes out to you, Phish the horse, and you alone. 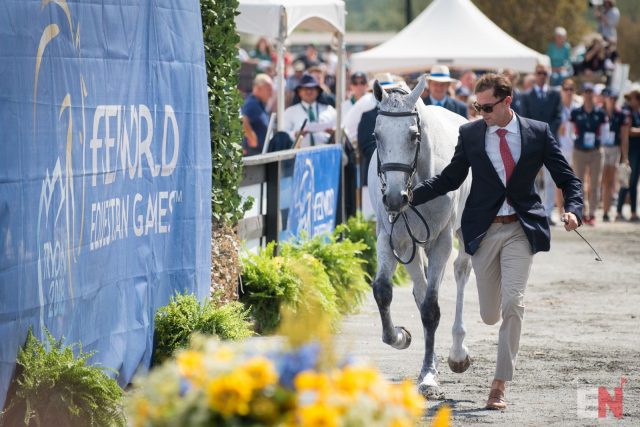 When Will Coleman and Phish got called up to represent Team USA at the 2018 World Equestrian Games, the pair followed the lines going south to Mill Spring, North Carolina. Upon arrival Phish, the sort of outdoorsy dude who doesn’t believe in deodorant, was scrubbed into shape by his groom Sara Holz. “We’re all in this together, and we love to take a bath,” she chirped, cheerfully untangling his dreads and sudsing him up.

Limb by limb, Phish’s team checked him over heading into the Wednesday horse inspection. Will muttered a cryptic warning to Phish to keep it together: “Whatever you do, take care of your shoes.”

Phish looked at Will quizzically, to which he clarified, “I mean, just keep your shoes on, OK buddy? I don’t want to have to deduct the carrots from your pay.”

The pair passed the first horse inspection with flying colors, and were the fourth pair up the centerline and first U.S. combination (setlist Will<Boyd<Lauren<Lynn<Phillip).

Hold the wheel, read the sign, keep the tires off the line, Will thought. Just relax, you’re doing fine.

Phish knew that this was the show of life, er, the show of a lifetime, and he buckled down to work. “I can bend in sixty-eight ways,” he said, strutting his stuff. He was a good boy, even though his heart was already out on the cross country track. Phish is no fluffhead but he is a free spirit, and bouncing around the room of the 60×20 arena he felt a little constrained. “Stop, go, stop a lot, go a little … man, sometimes I feel like a slave to the traffic light down here,” Phish groaned mid-test.

“I know this isn’t nearly fast enough for you,” Will whispered when his back was turned to the judges. “But bro, just focus on the connection. We gotta send this score backwards down the number line.”

“These circles are getting smaller all the time,” Phish sighed. “I need a new way to express myself.”

Nonetheless, they waded through the velvet sea of movements, putting in a solid score for Team USA. But all the while, Phish was waiting for the time when he could finally say, “This has all been wonderful, but now I’m on my way.” 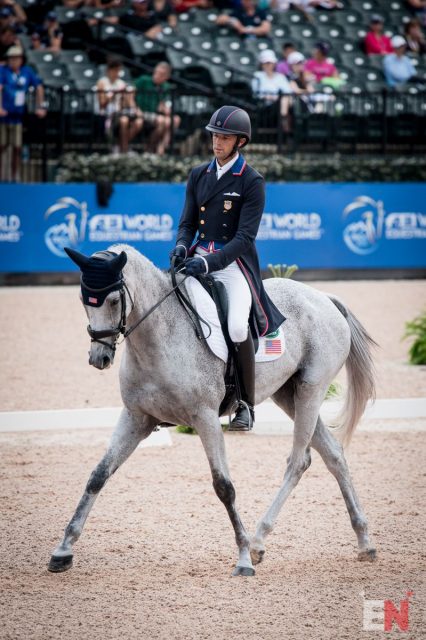 With phase one in the rearview, it was Will and Phish’s time to shine: Party time! They were to be Team USA’s cross country trailblazer, with Will using all his experience to feel out the time, which can turn elastic out there on course.

I wanna feel my feet leave the ground! he thought approaching fence #1. Set the gearshift for the high gear of your soul. You’ve got to run like an antelope, out of control!

“A little control is good, buddy,” Will reminded him, sensing the squirming coil beneath him.

Will and Phish are birds of a feather when it comes to cross country, and they stole time from the faulty plan to deliver a fast, clear round for Team USA. After a hot, humid run, the vet box’s misting fans made Phish feel like he was stepping into a freezer.

Nothing could be finer than to be in Carolina in the morning, and Sunday morning dawned bright and clear (author’s note: I know there’s a hurricane coming but this is my phantasy, OK?), no hurricane in sight. Final horse inspection: check. “We keep it rolling!” Phish whinnied.

“This is the end,” Will said, nodding his head in agreement. “My only friend, the end.”

Will raised an eyebrow: “Boy, man. You didn’t dip into that green hay this morning, did you buddy?”

Phish didn’t seem to hear him: “Wash uffizi, drive me to Firenze.”

“Your mind’s got a mind of its own,” Will sighed, giving Phish a scratch on the neck. “Hey, it’s OK. I’ve lost my mind just a couple of times, too.”

The pair sailed around the course, leading Team USA to the gold! Parading around the ring for their victory gallop, Will waved at the cheering crowd while Phish leapt from side to side with a worried look on his face: “Things are falling down on me, heavy things I could not see…”

Will: “They’re just roses, buddy. The crowd is throwing roses at you.”

Phish: “The roses are free?”

Will: “Nah, buddy, we worked real hard for these roses, but I couldn’t asked for a better partner. It’s not an experience if you can’t bring someone along.”

Truth. The end. And best of luck to Will, Phish and the rest of Team USA this weekend!