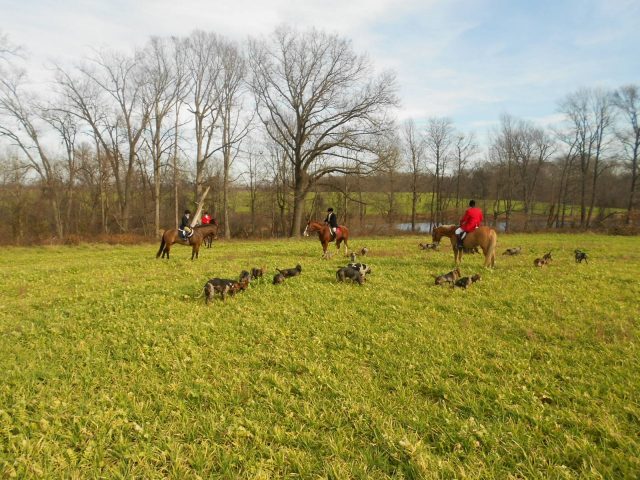 There are a few days a year when your foxhunting friends turn off their phones, set the alarm for “early,” and hit the barn at a high lope. Boxing Day is one of them!

What is Boxing Day? If you google it, you’re going to find a lot of political reports about the British foxhunting bans and protesters, because it’s a very active hunting day in Great Britain, but here in the U.S. we don’t seem to enjoy the same sort of publicity.

However we still celebrate this important foxhunting day on the calendar with few traditional things that are common to most hunts. It will be a hunting day but with a few extras!

In historical accounts, Boxing Day began about four centuries ago when working class folks were given gifts by the lords of manor homes. Wikipedia links Boxing Day to an older British tradition “where the servants of the wealthy were allowed the next day to visit their families since they would have to serve their masters on Christmas Day.”

The masters would give each servant a box to take home containing gifts, bonuses, and sometimes leftover food. The gifts or money were boxed, so that other servants couldn’t see what coworkers were given and compare the amount of bonuses or gifts to one another. This distribution was not seen as alms, or charity, but as gifts for services.

While some of the historic reasons for Boxing Day have been muddied over the years, it became a foxhunting day in more modern times, coming the day after the family holiday of Christmas.

Many hunts use the occasion to show gratitude to huntsmen and staff whose service makes hunting possible, with monetary gifts from members, traditionally offered in envelopes to the hunt masters.

It is a day that many hunts expect all the members to attend, and huntsmen bring their best hounds and turnout their horses to nines, because usually a good territory is planned that will bring a lot of riding and fun for the fields. It’s sort of a job performance examination!

Of course, you can never tell what is going to happen on a foxhunt, but trust that a stirrup cup will be passed, and a tailgate (known as breakfast no matter what time you arrive back at the trailers) will be vast and delicious.

Most of the foxhunters I know would rather attend the Boxing Day hunt than just about any other equine event on the calendar, because it’s a day to meet up with old and new friends, enjoy sport at the height of the season, and have a chance to reward the people who make the sport possible. No wonder Boxing Day draws a crowd!