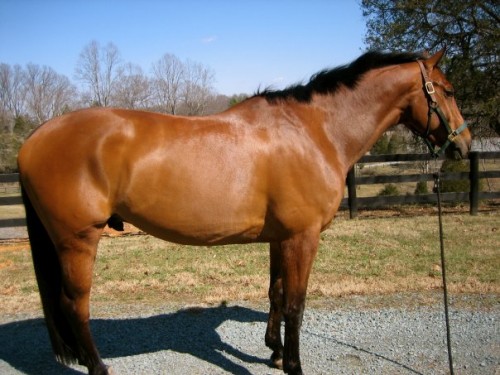 The short one (Nyls)

I’ve always been a confirmed lover of the short-coupled horse, and despite the fact that Nyls is a smidge over 17 hands, he has a serious case of tiny-head, short-neck syndrome and rides like a really tall pony. However, these days, my two-horse team consists of Mr. Stubby Neck Nyls and the new guy, Long Leggy Leo. I’ve certainly ridden horses of differing sizes and shapes, but never two so vastly different as these.

When I was a young rider, bebopping around my first cross-country rounds at Preliminary and Intermediate, having a short-coupled horse that could jam in a 4-foot extra stride was really handy, because I certainly needed that fifth (and sometimes sixth) leg over the jumps. Adjustable has always been both a blessing and a curse with Nyls, as he can ball up into the most unimaginable tiny stride one second and then explode into a stride inspired by Secretariat the next. I blame some of my early inability to figure out distances on his volatile and mostly unregulated self-adjusting stride.

As you can probably imagine, this pony-ish ability to scrunch up like a slinky backfired in the dressage arena, and still comes back to haunt me on occasion. Nyls, while built perfectly fine to jump, does not have the conformation for a dominating dressage performance. I’ve spent the last eight years convincing him that he does in fact have an acceptable extended trot, to some varied levels of success. Stubby Neck Nyls frequently receives the polite “short neck” comment at the bottom of his tests; meanwhile I  silently scream, “HE HAS A SHORT NECK WHAT DO YOU WANT!”

However, riding Leo and starting him from the beginning is a whole different experience. I rode some really long horses at the track, but I’ve never had an animal that was this big in every aspect. As he came to me with little to no muscling, I’ve been astonished at his general lack of coordination over varying terrain and through mud. Then again, when I realize that his hind legs are just that far away from his front, it makes more sense. I have spent a reasonable amount of time teaching him to take smaller steps than he naturally wants in an effort to increase his sure-footedness. 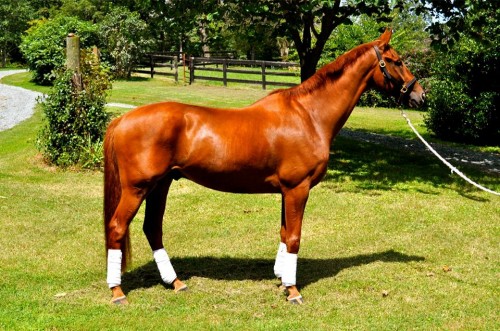 The long one (Leo)

In terms of jumping, he’s got great instincts but does not naturally understand the short distance. Nyls loves to be shoved practically underneath a jump and clears them easily from there, while Leo … not so much. “When in doubt, leave it out” seems to be his motto, and with a long body like that, it’s not really a problem. Learning to package all those body parts that are so far apart is an exercise within itself for both of us, as I’m doing just about as much work as he is! It is teaching me to learn to leave my horse alone more, because I simply don’t have the buttons that allow me to micromanage the way I am wont to do.

On the flat, though, Leo greatly exceeds Nyls in a natural manner. His gaits are lovely and floaty, and he positively loves extending! Fitting him inside a tiny arena to do a Beginner Novice test means that we literally take four strides and we’re at the other end, but outside of that he’s got a lot of potential in that area and is able to score quite well without really knowing what he’s doing. This makes my life easier, as I have no fear of receiving remarks about a perceived nervous tension due to a tiny neck.

There are clear advantages to each type, with both of them possessing qualities that are useful in the competition field. I still believe that the short-coupled horse is my favorite type, but that doesn’t mean it is the ultimate answer or even the answer for the majority of riders. Where do you weigh in, Eventing Nation? Do you side with Stubby Neck Nyls or Long Leggy Leo?