Getting to a CCI5* is always an enormous undertaking — but never more so than in a pandemic year. Our own Tilly Berendt is on the road to Luhmühlen with Great Britain’s Mollie Summerland and her horse Charly van ter Heiden – and she’s documenting the whole journey as it happens. Welcome to part four: 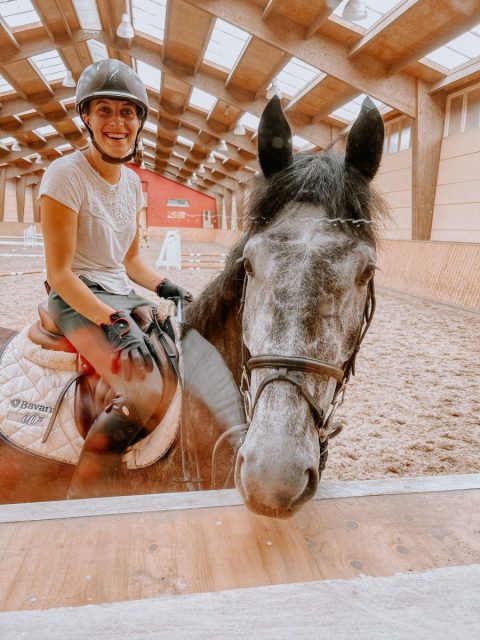 Family matters: Jillian and Lugano stop for a chat.

By the latter part of our stay in Breda, Mollie and I had formed a delightful little family unit with our cohorts at Tim’s: we’d spend the day working on our various jobs alongside one another and the evenings out cruising for snacks with head girl Jillian, who drives like she’s in a Dutch Grand Theft Auto and gave us all an early taste of those cross-country day heart palpitations. From our evening haunt on the terrace we’d construct elaborate drinking games based on the clinics taking place in front of us, none of which came to much as it turns out Tim has trained his students far too well. (And, to be fair, the booze is all nonalcoholic anyway.)

In those last few days, though, our family unit was to expand into the best kind of chaos: Tim and Jonelle Price, plus three grooms and six horses, joined our happy clan en route to Luhmühlen from Ireland’s Millstreet Horse Trials. Suddenly, it became very possible that we could be looking at a total Lips Stable domination across the two classes at Luhmühlen. 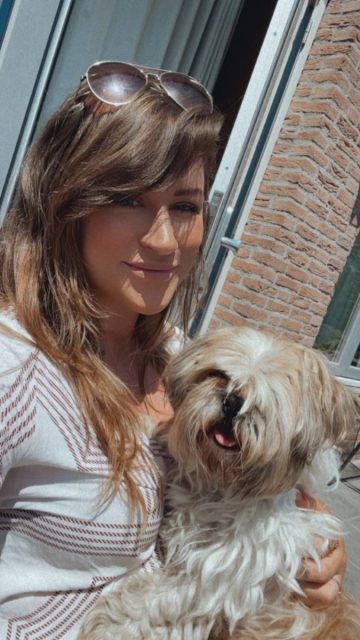 Hanging out with Popeye, just moments before the great faecal incident of 2021.

Team Price brought an extra addition along for the ride: a small, one-eyed dog they’d christened Popeye. Tim had spotted him running along the motorway in the wee hours of the morning and managed to do an emergency stop in the lorry, expertly manoeuvred a frightening moment in which the little dog nearly got hit by an oncoming truck, and scooped him up. In Breda, he quickly settled in, trying out any and all available beds, happily trotting along to do chores with whomever he came across, and getting frequently and inexpertly humped by a terrier belonging to one of the Lips Stable liveries. And then, of course, there was the delightful moment in which he accidentally covered me in poo, which means that somewhere in the security camera footage there’s an excellent video of me sprinting across the yard, hastily undressing as I went. He had his bum shaved after that by Kelsey, one of the Prices’ grooms, and so we all suffered some indignities that day. 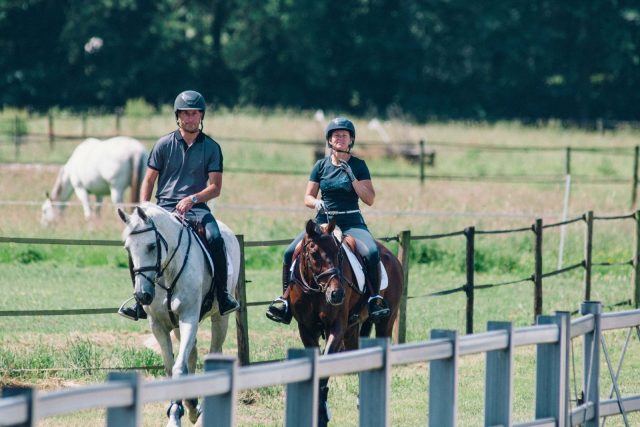 The new addition of a plethora of Kiwi accents to our diverse selection meant that I started to sound like a parody of everyone: I split my childhood between the UK and the US, and when you undergo an accent change as a child, your brain becomes a uniquely self-conscious little creature that tries to adapt, chameleon-like, to whatever sounds it hears frequently. It had drifted towards something vaguely continental in the first half of the week; by the latter half, every third sentence sounded rather like I was doing a bad impression of the Crocodile Hunter. This led to some communication difficulties.

“Are the bosses around?” I cheerfully called out to Kelsey one day, strolling into the Prices’ barn aisle.

“Are the…bastards around?” she replied, looking puzzled and defensive.

I wasn’t the only one struggling with accent troubles, though for Mollie, the difficulty was in interpretation. She bumped into Gosia, Tim Lips’s Polish groom, one day in the kitchen. Gosia had made the best use of her morning off, cooling off at one of the many nearby swimming areas.

“You have to go there one day,” she told Mollie in her strong Gdansk accent. “You have beautiful legs.”

Or at least, that’s what Mollie thought she said. She appeared in the lounge moments later, looking harried.

“I thought she was hitting on me, and I didn’t know how to respond,” she said. “But she was just saying they have beautiful lakes.”

“I’m going to leave here such an intellectual,” she proudly proclaimed one day. “I’m learning so much.” 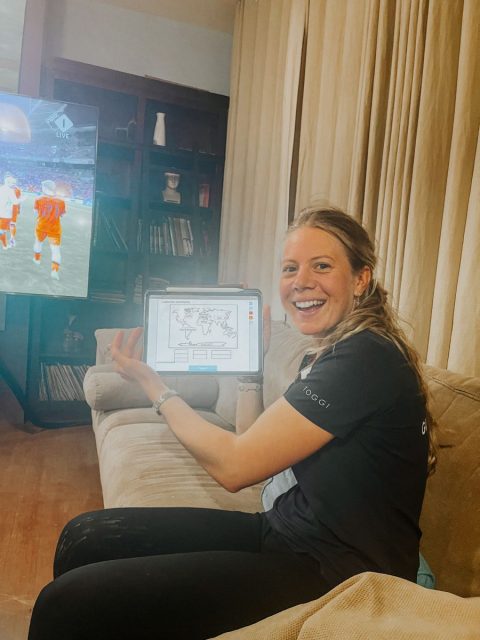 Like Columbus before her, Mollie aims spectacularly poorly and somehow discovers the Americas.

After discovering on that first night that she didn’t, in fact, know what continents were, she set about learning them with gusto a couple of evenings before our departure, helped along by an interactive map-labelling game I’d found for her on the ages 5-7 section of an educational website. It took some serious focus and a couple of misfires — notably, the labelling of Africa as Europe, because “I thought that was the United Kingdom,” she said, pointing at Madagascar — but eventually, she got it. No one was more proud than Mollie herself.

“I can’t stop thinking about Antarctica,” she said, pensively eating a block of cheese the next evening. 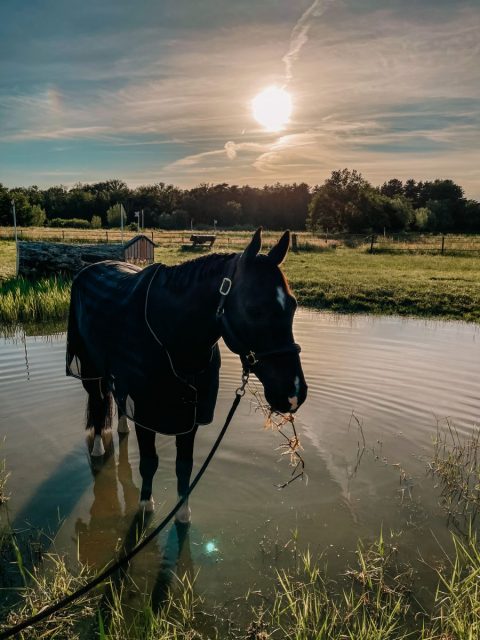 A reformed Charly shows off his best duck impression.

Charly — the happiest horse in the universe — had also come on in leaps and bounds. Not in his ridden work, which had already been excellent, but in learning to eat while away from home. At their debut five-star at Pau last year, he’d survived on a diet of 24/7 carrots, and for the first few days of our trip, he turned his nose up at mealtimes, but now he bellowed for extra meals whenever anyone dared venture past his stable. Mollie, high on the euphoria of knowing about Antarctica, reenacted a pivotal scene from Secretariat on her own in the barn aisle. 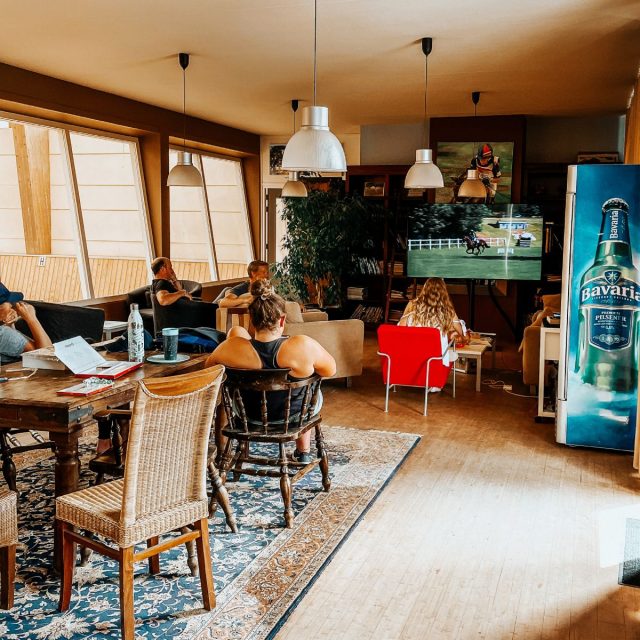 The Prices were due to leave a day before the rest of us, and they’d been good company, providing sparkling commentary as we all piled into the lounge to watch Bicton’s CCI4*-L cross-country, putting on a suitably excellent barbecue, and giving us all a unique insight into just how many opinions Ascona M really has. (A lot, as it turns out.) 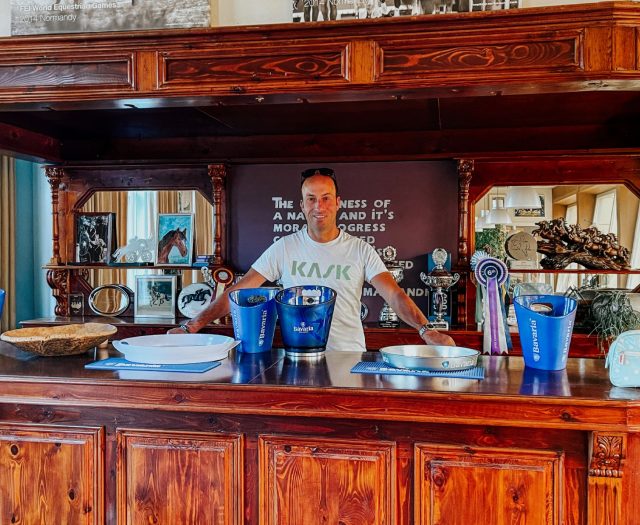 Tim never quite recovered from the discovery that all the booze was alcohol free.

Their horses had occupied a separate barn aisle during their stay, and anytime any of the rest of us pottered through, Tim would appear, roaring at us in jest to get out of his barn. After they headed to bed in preparation for their long journey the next day, Jillian, Molly and I decided to get our revenge, wrapped their lorry and aisle in banners reading ‘TIM LIPS 4EVER (no other Tims need apply)’. The battle of the Tims had commenced. 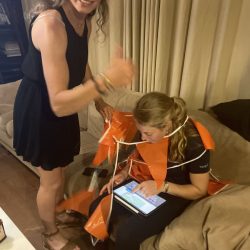 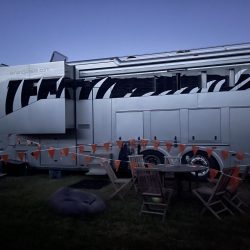 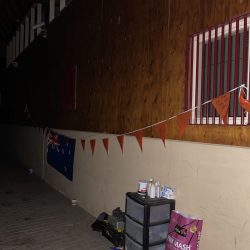 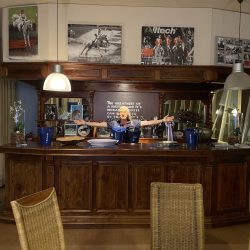 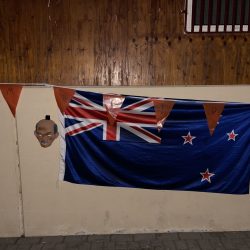 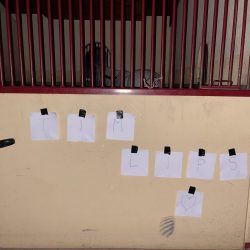 Throughout the ten days of our stay, it felt like there were good omens everywhere: I kept glancing at my phone just as 11:11 hit; Mollie and I had saluted every magpie within a five-mile radius; and little signs just kept adding up to add to the positive vibes around the place. Being in Breda felt like a lucky charm in and of itself – we were surrounded by people we’d come to adore and it felt more like a home than I could ever have expected. 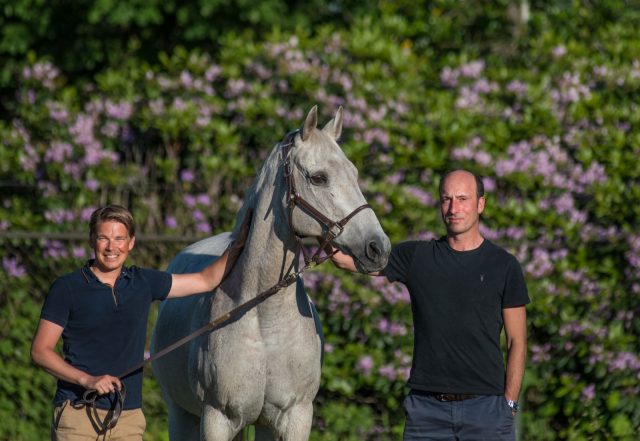 Two Tims and a horse who changed their lives. Photo by Tilly Berendt.

Just before it all came to an end, I sat down with each of the Tims in turn to chat about Keyflow, the now-24-year-old gelding whose sale had given Tim Price a foothold early in his career, and who had gone on to extraordinary success with Tim Lips for years thereafter.

After half an hour of sharing memories, the latter became pensive.

“I remember watching [Dutch Paralympian] Bibian Mentel on TV once,” he said. “She had had cancer over and over again and knew she was going to die. But she said life is all about collecting memories – it doesn’t matter what you own, or how much money you have, or how nice your car is. It’s about following your passion and gaining these wonderful memories. That’s what these great horses give us.”

I could say the same for the great people who work with them. Thanks for the memories, Tim: and now, onward to Luhmühlen. 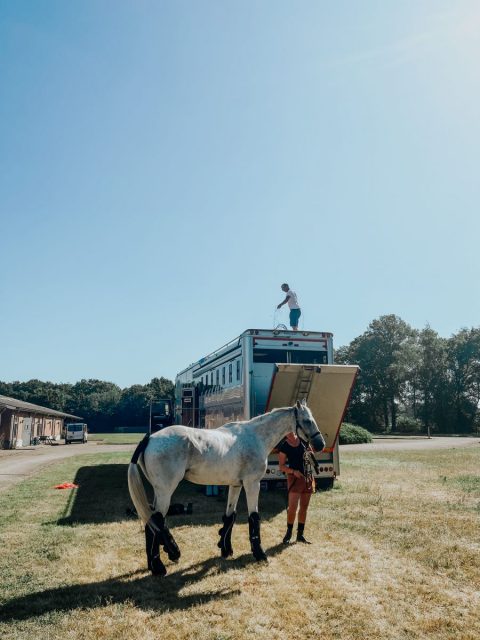