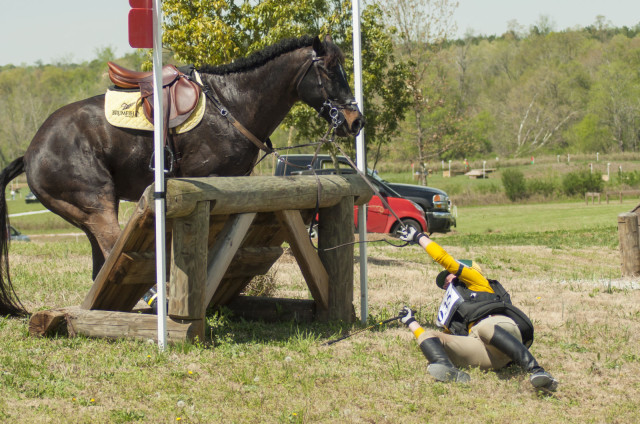 Marilyn Little and RF Demeter fell together at the Wellington Eventing Showcase earlier this month, with the incident broadcast live to thousands of people and available on instant replay to thousands more. Without a doubt, RF Demeter’s shoulder hit the ground and it was immediately apparent that the pair had incurred a mandatory retirement, or MR to indicate a horse fall. Yet the final results online read RF for rider fall.

This is a problem.

In the past two calendar years, EN has confirmed 12 incidents of horse falls being recorded as rider falls in official USEF and FEI records at three-star, four-star and Advanced events in the U.S. These incidents have been verified through photographs, videos and first-hand accounts confirming that the horse’s shoulder made contact with the ground. At least two of these incidents resulted in serious injury to the riders.

Why does it matter whether a rider fall (RF) or horse fall (MR) is the final recorded result if elimination is the consequence for both outcomes?

There are two primary reasons for differentiating between types of falls in results databases. The first is to collect data on how, when and why horse falls, and particularly rotational falls, occur. In order to have any meaningful conclusions, we must be able to trust that data. With as endemic as this issue has become, we can no longer rely on the accuracy of the results.

The second reason is to put the brakes on any pair having recurring issues and require them to re-establish their qualifications at a lower level. While the FEI does not differentiate between horse and rider falls for the purpose of reverse qualifications, the USEF rules do have more stringent requirements regarding horse falls. Two horse falls within 12 months require horses to step down one level. (For a more complete discussion, revisit The Elephant in the Room: Reverse Qualifications).

One of the aforementioned 12 whose MR was incorrectly recorded as an RF went on to have a second MR within 12 months. If the first horse fall had been properly recorded as an MR, the two falls would then have triggered the USEF’s loss of qualifications procedures, requiring the horse to drop back down to the Intermediate level.

Instead, the horse was then entered in his first four-star competition, where he fell a third time. Only then did he encounter both the USEF and FEI re-qualification requirements, having triggered both due to being eliminated three times in 12 months.

This was a fall that could have been prevented. Thankfully, both horse and rider walked away each time.

RF Demeter is now in a similar situation. Her fall at the Wellington Eventing Showcase was her second in 12 months, having also fallen at Rolex Kentucky CCI4* in April 2016. If the showcase was a sanctioned USEF Advanced competition and the result was properly recorded as an MR, she would now be required to run two Advanced or CIC3* competitions to regain her CCI4* qualifications.

Because the Wellington Eventing Showcase is not recognized or sanctioned by any governing body, no official results will be recorded with either the FEI or the USEF. For all intents and purposes, the results shown online are the official final scores for this competition. They will not become a part of RF Demeter’s official show record and will not have any consequences that would have occurred if the showcase was a recognized horse trials or FEI event.

Yet the consequences are just as real.

If we are serious as a sport about improving safety and preventing horse falls, we must be brutally honest with our results. We cannot sweep any MR results under the rug, passing them off as rider falls in an effort to make our sport appear safer to the outside world. If we want any real progress on safety, we cannot contaminate the data with false results. And if we want to actually try to save horses and riders from these falls, we must be able to implement the rules designed to protect them.