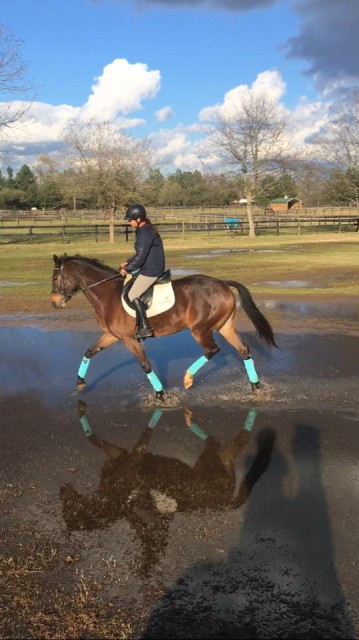 Note to self: never, ever assume that a horse you’ve owned for almost 12 years who is going on his 16th year of life has “grown up” and decided to start “acting trained”. This applies especially to those early gallop sets coming out of winter doldrums. Yesterday, it was warm and only marginally windy, and the ground was good, so I hacked over to a turf track down the road and over a river, to have a little fitness day. It’s a good thing nobody was there to witness the atrocities that followed, because the ping-pong zip-line spastic behavior was just second to next. Spook at: clump of grass, spot of weird dirt, open gate in fence line, stump over there, shadow over here, bolt going this direction, balk going that direction. I give up.

A British rider has petitioned to allow bitless bridles to be allowed in recognized dressage competitions. Tam Russell has called for British Dressage to change their rules about requiring bits for dressage in competition. Unfortunately for her, BD responded thus: “This decision is based on one of the fundamental principles of dressage being built on the acceptance of the bit (while much of the terminology of this relates to acceptance of the bridle, it is widely understood that this is the acceptance of the bit).“To change this principle would have far-reaching consequences, not least that we have to have a competition structure that progresses in to international sport. For this reason alone, we have to align closely with the FEI.” [BD Responds to Request for Bitless Bridles]

Great news for fans of Fresno County Horse Park and Aspen Farms, as Southern California Equestrian Sports has added $2,000 in prize money to the events this year. SCES will be handing out prize money in the CIC* and CIC2* divisions at both Fresno County Horse Park this weekend, as well as the CIC* and CIC2* divisions at Aspen Farms in the second week of June. SCES is a non-profit organization dedicated to helping riders and organizations raise funds to compete in and support their national and international competitions in the US. [SCES Adds Big Prize Money]

The Thoroughbred Incentive Program Youth Ambassador of the Month for February is Morgan Kastner! Morgan is from Minnesota, and at 18 years old, she competes two thoroughbreds in both English and Western disciplines. She is incredibly passionate about the thoroughbred breed, and believes thoroughly in their ability to do any kind of job you could possibly want. [Horse Nation Spotlight]

Laughing at British People Laughing at Us: American Horsey Jargon That Leaves Us Baffled

Best of Blogs: 20 Best Tumblr Posts About Living With Horses