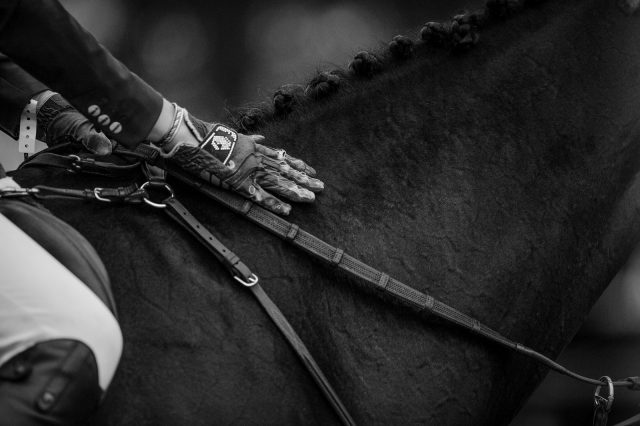 With just a couple of days left until we tumble headlong into another year of whatever the hell this has been, you’re probably breaking up your post-Christmas cheese coma with the noble task of making your New Year’s resolutions. I won’t stop you, of course, but do consider allowing me to save you some effort by crossing off the ones I know none of us are managing in the year to come…

9. “This is the season in which I actually leave enough time to warm up.”

At home, you’re a consistent 25-er, aren’t you? But it all falls apart, doesn’t it, somewhere between putting your foot in the stirrup and entering at A when you’re out competing. I can’t think why that would be; it’s unlikely that it’s got anything to do with that leisurely 10 minutes you spend working your horse in a loose and relaxed outline at home, before gently picking up the contact and riding approximately 10,001 transitions until your horse is sitting on his backside and dancing around the arena. There’s no way that careening into the warm-up 45 seconds before your test is due to start and frantically riding five transitions in and out of canter with one boot totally unzipped won’t yield the same end result. And anyway, even if that was the cause, you’re definitely going to be more punctual in the season to come, and you’re never going to lose your horse in the lorry park after he buggers off while you’re attempting to get the bridle on, and as such, you’ll definitely always have time to find a quiet space and do all that very zen stretching. Of course.

Like hell you will. You’ll go into January with the best of intentions: you’ll plan to work lateral movements into your walk, keeping your horse working into a contact and engaging his hind end. You’ll pepper this most boring of paces with transitions into free or extended walk and back again, and in those headiest, most ambitious early days of the new year, you might even vow to nail walk pirouettes, a movement surely thought up by the devil himself. But by mid-January, you’ll be just like the rest of us schmucks, and walk will mean one thing: a loose-reined opportunity for a breather. Oh, maybe another thing, too: a reliable 5 in every test you ever ride. But you know what? Nothing’s more comforting than consistency. Nothing, that is, except pootling around on the buckle, thinking about anything in the world other than trying to make a decent walk happen.

7. “This year, I’m going to take my fitness as seriously as my horse’s.”

Look at me. Look deep in my eyes. Don’t be frightened. I know you. I am you. We are the same, you and me, sitting here in our kitchens, poring over the year’s competition calendar. And that’s how I know you’re lying.

“My horse is back from her holiday and trotting for 30 minutes now,” we think to ourselves, marking the date with a red pen, “so by this date” — another quick scribble — “I want her to start jumping and by this date” — can you smell the Sharpie fumes? — “she should be ready to compete.” The path from A to B to C? Weeks of interval training, as prescribed by our universal fairy godmother, Lucinda Green. And there’ll be no cutting corners, oh no: that same Sharpie will be used to jot those intervals onto our bare arms, so we can easily glance at the timings as we set our watches. Our horses won’t take a single step more or less than what we’ve painstakingly decided they need, and by March, they’ll emerge hard and muscled and rippling with power and barely-suppressed insanity. Meanwhile, we’ll nearly tip over a porta-loo at our first event back, so robust will be our struggle to do up last season’s breeches, now a full size too small.

Now, there’s nothing at all wrong with changes in your shape or size, all of which are natural and normal and should be embraced as signs we’re alive and thriving against all the odds that modern life throws our way. But maybe we do owe it to ourselves — and our horses — to at least give ourselves a bit more cardiovascular stamina, right?

6. “No matter how many rosettes they win, I will not fancy an event rider in the year of our lord 2022.”

Can you hear that? It’s the sound of the deepest sigh I have ever sighed. Pour yourself a glass of wine, love, and prepare yourself — because in 2022, I’m afraid you’re going to make the same mistakes you always have.

There’s a little game my friends and I like to play called “Do I Fancy Him, or Is He Just Wearing Breeches?” The premise is very simple: imagine the object of your lust in ordinary clothes, on some ordinary street somewhere. Stripped of his tall boots and spurs (steady on, Jilly Cooper), he’s probably just another chap with an ego that’s convinced him he deserves a harem of blonde Young Rider candidates doting on him, despite the fact that he truly believes that wearing loafers sans socks is the hautest of couture. Remove the skull cap and you’ll likely find a fierce receder. Look a little deeper, truly analyse his chat and game, and you might be devastated to discover he has none. You want to host a dinner with your clever university friends and discuss Dostoevsky? Eventing Boy’s got one topic of conversation per letter of the alphabet and D’s taken by Ditches, I’m afraid. But god, does he look good going over them, and so we are all doomed to repeat the mistakes of the past.

(Before I get cancelled in the comments section, I adore a great many male event riders, many of whom are excellent people. But I’m British, and so I reserve the right to affectionately bully the people I like. Thank you and goodnight.)

5. “I’m going to ride without stirrups once a week this year.”

Alright, Mr Stickability, steady on. You’ll suffer through a total of two (2) lunge lessons, pull so many muscles that you consider reviewing your last will and testament, and then read a scathing comment on a Facebook group that points out that no-stirrup work is detrimental to your horse’s spinal health. That will be good enough reason for you to staple your stirrups to your saddle for now and evermore.

4. “I will absolutely not continue to haemorrhage money on gear I don’t actually need.”

Look, perhaps you will manage this. Perhaps you’re better than me, a person with no impulse control, who wouldn’t know a budget if it shat in her kettle and who has to start all her Hinge dates with an embarrassing confession about the state of my credit score. Maybe you won’t be influenced by targeted advertisements, which won’t at all convince you that a special £35 pair of knickers will help you finally sit the trot, or a £750 bridle will cure your horse of being a terminal idiot. Maybe. Or maybe you’ve already ordered your January supply of turmeric, and there’s no hope for you either.

Is it? Is it really? Because you and I both know that the cooler you’re keeping your horse’s ice boots in is also perfectly formed for a post-cross-country gin in a tin or five.

That said, if you found yourself doing pre-dressage shots at 8am in 2021, maybe this is a good resolution to stick to.

2. “I will no longer do horsey laundry in the house machine.”

If you’re happily married, you may actually stand a chance of sticking to this one, purely because you know that the good ones are hard to find and divorces are pretty paperwork heavy. If your washing machine is yours and yours alone, though, you’re as stuffed as its wheezing filter. Just don’t come crying to us when you realise that all that errant horsehair has become one with the cups of your bras, leaving you trying to subtly itch your way through your working day as half a horse trit-trots its way across your areolas. This could have been avoided! You could have secured yourself a lifetime ban from the local laundromat instead! Do you ever learn?

Objectively, you’re a filthy little gremlin: you muck out your horse’s biohazard zone of a stable and then merely wipe off the excess slimy bits onto your breeches before popping the kettle on and grabbing a couple of custard creams out of the shared biscuit tin. You, of course, think nothing of it — there’s a bit of a pooey whiff if you really linger with your fingertips by your nose, of course, but you’re not much of a lingerer. Instead, you fling your snack somewhere in the direction of your tonsils and crack on with your day, blissfully unaware that your entire existence is one long flirtation with cholera. You might be committed to changing this horrible habit in 2022 — much as you might have convinced yourself you’ll stop wandering into the supermarket stinking of a urinal — but you know it’s not true. Anyway, your immune system is probably an ironclad beast of a thing these days, and in these trying times, that’s exactly what you need. Crack on; you’re nailing it.