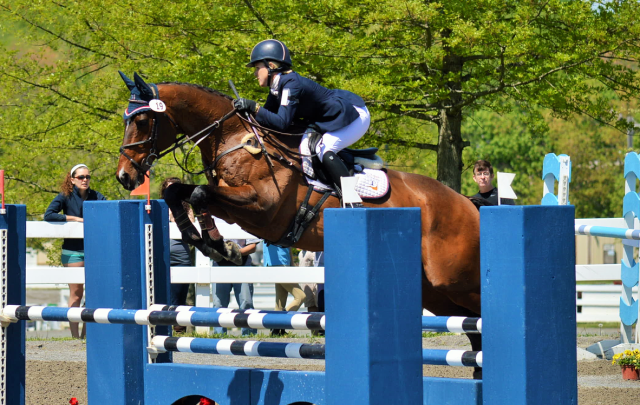 Justine Dutton successfully conquered her and Huck Finn’s first CCI2* this weekend at Jersey Fresh, firmly cementing their status as an up and coming pair on the rise. I became a fan of Justine’s after reading about her adventures as “The Other Dutton,” and took the opportunity to get to know her a bit while in New Jersey.

Justine and Finn laid down a 53.5 for their dressage test, which put them into 11th place in a division of 23. John Williams’ cross country course claimed its fair share of victims on Saturday, but Justine and Huck were not among them. These two stormed around the course with no jump and no time penalties to move up the leaderboard to sixth place overnight.

While she definitely had some qualms about the course after walking it, Justine credited coach Buck Davidson with amping her up and making her believe she and Huck were truly ready for this step up. “He is very encouraging and positive,” Justine said. “He really makes me believe in myself.” 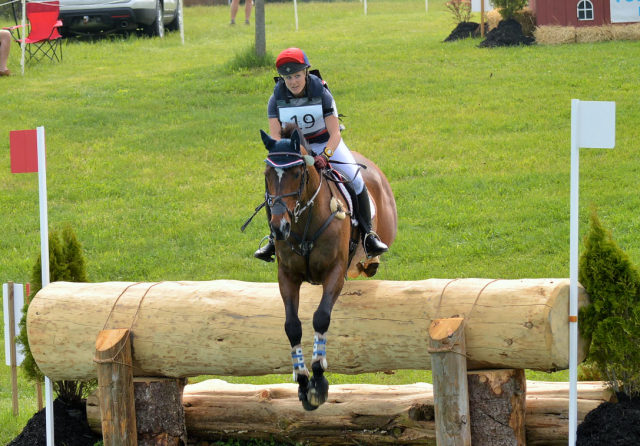 Justine and Finn on cross country. Photo by Sally Spickard.

Justine and Finn went on to finish seventh in their CCI2* debut, a result that Justine is no doubt thrilled with, and also took home the Thoroughbred Incentive Program High Point Thoroughbred award. Justine plans to get some more mileage at this level before moving up to Advanced, but it looks like the Advanced and three-star level are not far out of their reach at this point.

Justine is truly a testament to how far hard work, diligence, and a great attitude can get you in this sport, where success does not come easily. Many congratulations to Justine, Finn, and all of their connections on a successful Jersey Fresh weekend!