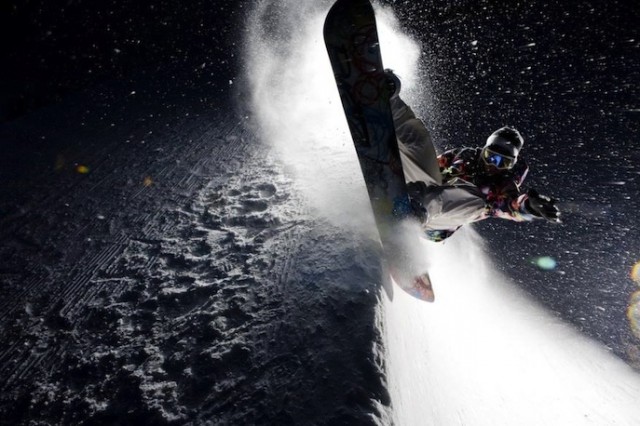 Photo courtesy of "The Crash Reel."

The Sochi Winter Olympics, which kick off in just under two weeks, feature some of the most terrifying sports ever invented by mankind. Luge, skeleton, aerial skiing, giant slalom, snowboard halfpipe, ski jumping … they all look like death wishes to me.

And yet when you Google “most dangerous Olympic sport,” the first link that pops up is this 2012 Time story about eventing. An ominous subhead reads: “The slightest miscalculation in the cross country can cost medals, as well as possibly lives.” I guess it all depends on your frame of reference: Better the devil you know than the devil you don’t. Turning flips five stories up in the air on skis or careening 90-mph down an ice chute on a tiny sled — that’s insane, right? But to us, strapping a saddle on an animal with a mind of its own and galloping full-tilt toward solid obstacles makes perfect sense.

It reminds me of a quote from the 2013 HBO snowboarding documentary “The Crash Reel.” “I look at dirt bikers like they’re crazy,” says one snowboarder. “They look at us the same way.” “The Crash Reel” tells the story of Kevin Pearce, a half-pipe wunderkind who at age 22 was on the road to compete at the Vancouver Olympics when a traumatic brain injury derailed his career and nearly ended his life. It’s a fascinating (if difficult to watch) film, not only because it provides an intimate look at the complexities of TBIs, but because it illuminates some of the issues that face all extreme sports, eventing included.

Not unlike eventing, snowboarding has experienced a dramatic evolution over the past decade. And in the process of testing the boundaries of athleticism and technical ability, both sports have hit the ceiling on occasion. For snowboarding, the introduction of a 22-foot half pipe allowed athletes to fly higher in the air and perform awe-inspiring feats that were unimaginable five years ago. But the innovation came at a price. Typical of many top athletes, Pearce was compelled to push the envelope of what was possible and, on one sunny day in Park City, Utah, in 2009, he failed.

Another example of risk escalation and its sometimes tragic consequences was witnessed by an international audience at the Vancouver Olympic Games. During a training run, Georgian luger Nodar Kumaritashvili suffered fatal injuries after losing control on course and being catapulted off the track. At a press conference the day before Kumaritashvili’s accident, some Team USA luge athletes expressed concern about the track being “too fast.” Ultimately, though, they laughed it off. For extreme athletes, risk-taking is just part of the culture — until it’s too late.

Bodies (both human and equine) have limits, and the laws of physics aren’t negotiable. You can only raise the bar so high. Even if by necessity, eventing has done a really laudable job of coming together in recent years to address issues of safety, course design and the trajectory of our sport in general. But it’s a job that’s never really finished. Continuing forward, it’s important to remind ourselves that our sport doesn’t exist in a vacuum, and that it’s worthwhile to observe how other sports — no matter how different they seem — manage the challenges they encounter. We “crazy” people have to stick together.