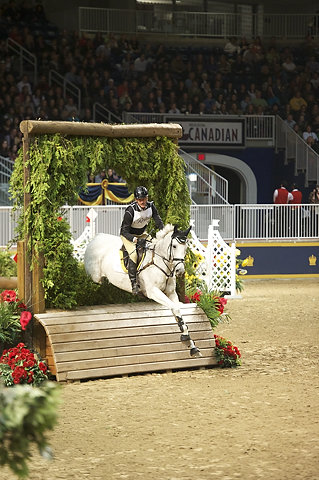 It’s that time of the year again folks…it’s Royal Week!! No, no, not more stories of Zara dancing Gangnam or Dutchess Kate taking riding lessons, I’m talking about the Royal Winter Fair. In Canada. This weekend. Indoor Eventing. Get with the program. “The Royal”, as it is colloquially called, begins on Friday November the 2nd, and goes for a full week, until next Saturday, November the 10th.

Most of the classes are Hunter classes (booooorrrrriiinnnngggg), and besides the class that is labelled “Percheron Unicorn”, I have little interest in the rest. What I’m excited for is the Indoor Eventing portion, which has garnered a fair amount of infamy in the past few years. The course is designed by Captain Mark Phillips this year, and combines the bravery and speed of cross country with the nimble and careful elements of show jumping. The cross country jumps can be 3’7 high and 4’7 wide. Show jumps can be 3’7 high and 4’4 wide, or 5 feet for triple bars.

Waylon Roberts has been keeping the first place prize from everybody else for an astonishing five of the past six years of Indoor Eventing history. He will be returning on his winning 2011 mount, Sable Giesler’s Evil Munchkin. But this year, we’ve got a good group of people ready and willing to take that trophy out of his hands, including Team Canada’s new coach, trying his hand at beating his own pupils! Here’s the list of confirmed riders for the Indoor Eventing competition of 2012 (November 2-3): 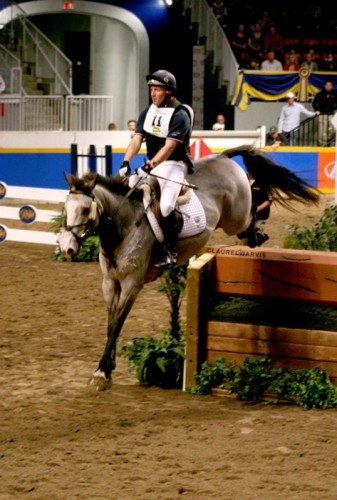 The rules are a little different for Indoor Eventing than for regular Eventing, or even for regular Show Jumping. Bear with me here as I try to explain in the most effective and efficient manner possible. The first rule is that there is no time allowed, only a time limit of 3 minutes (if the course is more than 600 meters) or 2 minutes (if the course is less than 600 meters). If you knock down a show jump pole, instead of adding penalties, they add four seconds of time to your score. Refusals at any jumps are not penalized except for the time it takes you to re-present and get over it, which is pretty costly. However, should your horse refuse twice on course, you are eliminated. The final score is the time taken to complete plus any obstacle knock-down penalties.

There are two competitions, one night after another, and after the completion of both, the two scores are combined for a total cumulative score. The rider with the lowest score wins! Should there be a tie, the rider with the fastest time from the second night will be the winner. And winning? Not so bad, considering there is $20,000 in total prize money! Too bad real events aren’t more like it in that respect….

If you are lucky enough to be nearby, you can buy tickets to the event online (it’s totally worth it), but if not, don’t worry, there is live streaming available.

Waylon winning the 2010 Indoor Eventing class with some pretty clever inside turns, and a very honest horse.

And my personal favorite Indoor Eventing video, Doug Payne’s helmet camera of a…shall we say…..interesting round.