With seventeen horses and riders delivering sub-30 scores and offering up the lowest ERM venue average yet, it was going to take something seriously special to lead the first phase in the pivotal fourth leg of the 2019 series, which commenced today at Paris’ Haras de Jardy. And that’s exactly what Frenchman Thibaut Vallette and his long-time partner Qing du Briot ENE HN delivered.

The home-nation hero rode the eye-catching and enormously experienced gelding with whom he took the team gold medal at 2016’s Rio Olympics, and delivered a score of 23.2, equalling their own career personal best — incidentally, a score produced at the same venue in 2017. 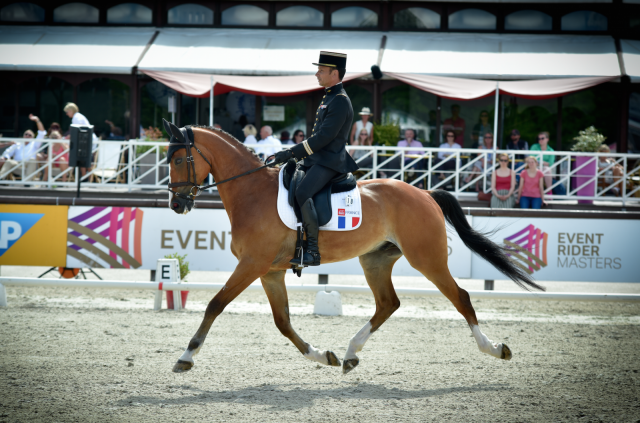 “He’s a very good horse for this test,” says Thibaut, who has contested two European Championships and the World Equestrian Games with his fifteen-year-old Olympic mount, too. “He has really good paces and he’s very quiet to ride – it’s very good. It’s very nice to be here – I was here two years ago, and I hope this will be our last round before the European Championships this summer.”

Formerly an officer in the Alpine Troops, Lt. Col. Vallette joined the legendary Cadre Noir at Saumur in 2009, where he teamed up with the cavalry-owned Qing du Briot. The Cadre Noir, which is France’s prestigious and centuries-old seat of the cavalry, is known for its commitment to classical training – not unlike the Spanish Riding School, it specialises in teaching the high school of dressage. In a sport like eventing, with its origins firmly rooted in cavalry training, it’s a poignant throwback of sorts to see the enormously competitive Cadre Noir riders contesting the uppermost levels. And when they do? Well, they’re quite often unbeatable, as we saw today.

Though Thibaut’s score of 23.2 put him well in the lead, the assembled ground jury of Eric Lieby, Christina Klingspor, and Les Smith were happy to reward work done well across the board. This meant that many combinations scored several marks better than predicted, putting extra pressure on the consistent first-phase performers to deliver their best work. 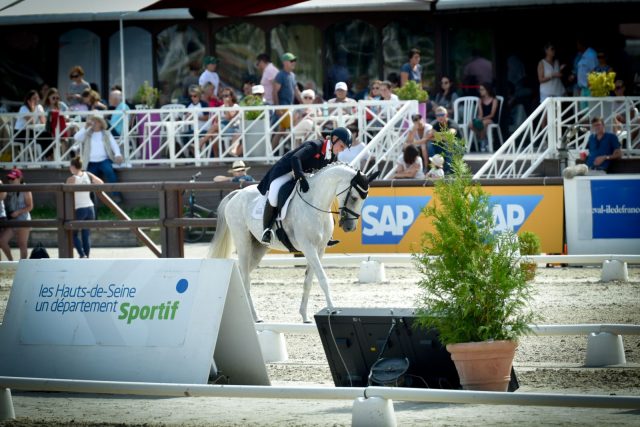 One of those combinations expected to top the leaderboard was Gemma Tattersalland Quicklook V, who began the day as EquiRatings’ predicted winner. Quicklook – known at home as Princess Pebbles – rose to the occasion, putting a score of 25.1 on the board. Although it wasn’t quite enough to edge the lead, the polished performance between the boards belied a rather more excitable warm-up.

“She came into the warm-up and she was pulling my arms out — I was like, ‘excuse me, let’s not do that!'” laughs Gemma. “She thought she’d be sassy and feisty, but we managed to have a few little conversations – we understand each other really well, so I could get her back in the box and then release her in the ring.”

‘Pebbles’ is at her best in the sunshine and on sand, and once in the arena, Gemma was able to put her faith in her Olympic partner’s ability. Just one small error in one of the flying changes saw their mark fall.

“She’s such a show-off, and she knows her job really well. She did a fantastic performance — that flying change was all my fault,” says Gemma. 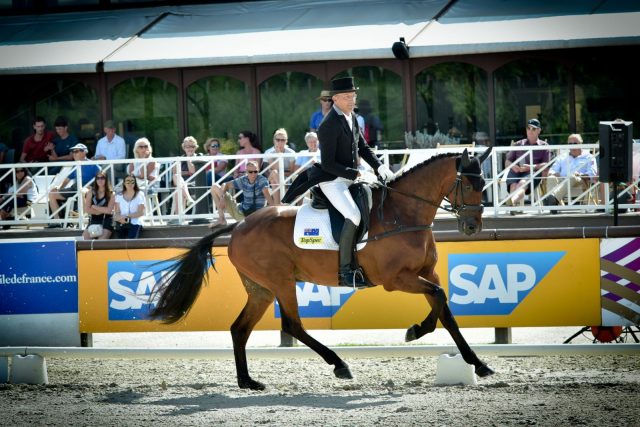 Bill Levett and Shannondale Titan lay down their second-best test at any international level. Photo courtesy of Event Rider Masters.

Australia’s Bill Levett and his stalwart partner Shannondale Titan are among the ERM’s most regular competitors, and they’re inarguably one of the most consistent pairs in this phase, too. Today, they delivered a personal best in an ERM leg, scoring a competitive 25.3 to sit in third place overnight.

“He’s very solid now,” says Bill, whose fourteen-year-old son Josh makes his international debut at Jardy this weekend, too. “It’s nice to go in there, and I’ve got the set-up right as I know [the horse] so well. He doesn’t need more than ten minutes, and he’s such a genuine horse. It’s nice to be in the mix — we’re right up there with the leaders!” 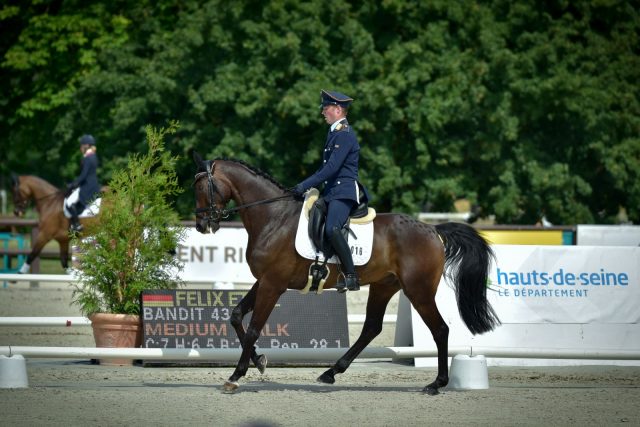 Felix Etzel is best of the Germans after the first phase. Photo courtesy of Event Rider Masters.

Germany’s Felix Etzel and Bandit 436 struck a fine balance in the arena, with the up-and-coming rider allowing his horse to soak in the vibrant atmosphere of the main arena without letting him bubble over. The result was a nearly foot-perfect test that earned the pair a score of 25.4, putting them in fourth place overnight and making them the best of formidable German entry.

“He did a couple of good tests this year and this is another one,” says Felix of his eleven-year-old Hanoverian. “In the warm-up he was tense and hot, and in the beginning he was quite nervous, but I got him calm enough for the test, and he did his best. As you saw after the last halt, he’s really fresh and wants to go forward, so he’s motivated for tomorrow!” 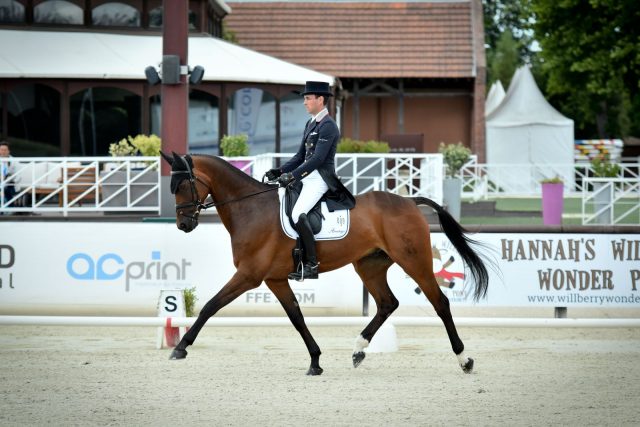 Swiss superstar – and ERM debutante – Felix Vogg rounds out a truly international top five. His impressive test with Colero earned the duo a mark of 25.8, which saw them lead for much of the afternoon. Now, he sits just a tenth of a penalty ahead of sixth-placed Emily King and Brookleigh.

“I didn’t expect that – it was a bit difficult in the beginning, and he spooked a bit at the camera,” says Felix. “But he did his best and I’m really pleased with him. He can do a really good test – he’s shown that a few times. But my feeling is still that there’s a lot more that he can do. Even his scores now, where he’s doing well – I think there’s a good future for him in this phase.”

Leg 4 continues tomorrow with a tough showjumping track in the morning, followed by the twisty, technical cross-country test, designed by Rio Olympics course designer Pierre Michelet, in the afternoon. Just one pole separates the top seven competitors, and two separate the top twenty, so there’ll be no room for error as our intrepid challengers chase down those crucial series points.

Want to take a deeper dive into the world of ERM? Make sure you download EquiRatings Stacks, the high-stakes prediction game that can win you an iPad. Want to get ahead of the competition? Head over to the Prediction Centre to see how your favourites stack up against the competition. Then, jump into the SAP Spectator Judging app to see how you fare against our experienced panel of judges and to gain valuable Fan League points. 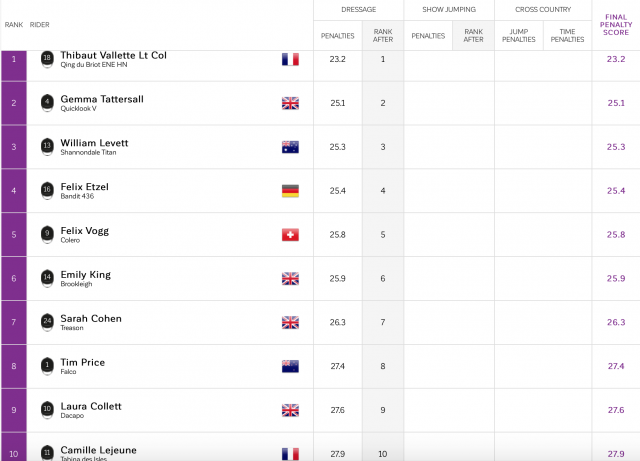 The top ten after a red-hot day of dressage in Jardy’s leg of the Event Rider Masters.