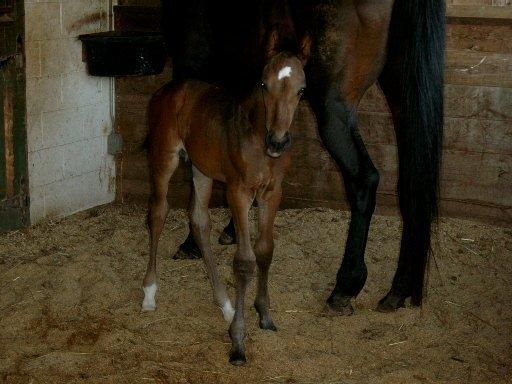 That moment when you just know that you've met your next horse...

I’ve found myself drawn to young horses – not just in an ‘oh I think foals are SO adorable’ kind of way either. I bought two out of my three horses when they were quite young – I saw my boy Mark for the first time when he was only 2 days old. And while I had seen quite a number of other foals born where I boarded Ripley, I just had a feeling in my gut when I saw Mark. Even though he was just this gangly, awkward bit of a thing, I was drawn to him. So when he was 11 months old, I made it official when my sister and I bought Mark together.

Since I was a college student at the time and brand new to the world of owning a youngster, I had no idea what I was getting into. But looking back at the years that I’ve had Mark, I realize that it has taught me a whole heck of a lot of young horse nutrition, management, and…oh yeah, training. I found that having the chance to watch a youngster grow and develop has been so rewarding that I brought home my other ‘baby’ Rufus when he was just a year and a half old.

The Horse.com recently posted an article about Young Horse Digestive Health, in which proper planning and management in order to promote a foal’s digestive health is discussed. Making sure that a foal is receiving proper nutrition and that his or her digestive tract is primed to function can put them on the track for healthy development. A foal can develop digestive issues right from the very start. That’s why it is so important for their owners to ensure that they are raised in an clean environment that promotes a normal colonization of microbes in their bodies, which will hopefully keep pathogens out.  Check out the article here.

Wound-healing Secrets of Raw Honey Identified – Researchers at Lund University in Sweden have recently conducted a study in which they applied honey that had been fortified with bacteria to horses that persistent wounds. The study included the treatment of 10 horses, which were all healed by the honey mixture. The researchers are suggesting that this could possibly be an alternative to antibiotics. [Horse Talk]

Prevalence and Risk Factors for Obesity – Since equine obesity is a growing problem, a group of British researchers recently conducted a study to discover just how many horses are really overweight, and what factors might contribute to equine obesity. After receiving responses from over 700 horse owners, researchers have concluded that approximately 31% of horses and ponies from respondents were considered to be obese by their owners, based on a modified version of the Carroll and Huntington scoring system. [The Horse]

Soothing Voice Cues Show No Benefit to Horses in Study – A team of researchers hailing from the United States, Germany and Italy have come to the conclusion that soothing voice cues do not have an effect on a horse being able to learn a task that frightens them. The study was conducted using a total of 107 horses from 2 facilities in the United States, and 7 facilities in Europe. [Horse Talk]

Magnetic Blankets’ Impacts on Horses Studied – A recent study conducted by Swiss researchers has led to the conclusion that not all blankets that contain magnets for therapy actually do increase blood flow to the extent that manufacturers claim. The researchers have found that when using a control group of healthy horses, that both magnetized and non-magnetized blankets will increase blood flow – yet they caution that the study does not include results for sore horses, and it is possible that their blood flow could be impacted differently by magnetized blankets. [The Horse]

US Clinical Trial Announced for Equine Melanoma Vaccine – A clinical trial has been announced for a cancer vaccine that is meant to treat equine melanoma called ImmuneFx. There is no existing treatment for equine melanoma that is approved by the United States Department of Agriculture, and the condition is something that grey horses can be particularly susceptible to. The vaccine is designed to injected directly into any melanoma lesions that exist on a horse.  [Horse Talk]