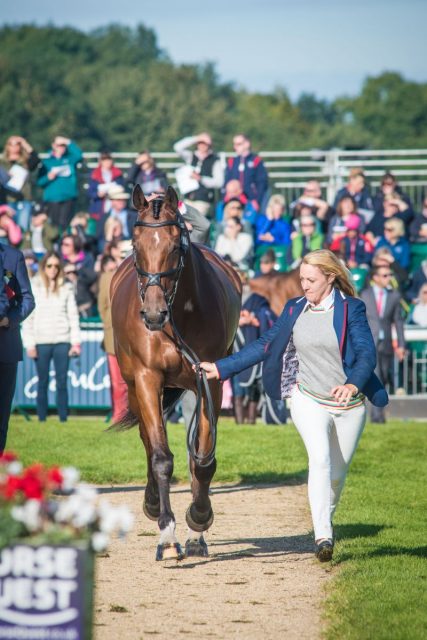 This week’s biggest headline in horse health news is so big that you may have already heard it the mainstream media. You’ll certainly want to catch up on that crazy story, but don’t miss our the other interesting tidbits from this week as well, presented by MediVet Equine; in addition to news that’s rocking the racing industry, scroll down and read on to learn a little about the best shod horse at Burghley, how your horse might be eligible for a free Cushing’s Disease test, and a word of caution to anyone planning to travel to Ohio.

This Week in Horse Health News …

The 2018 Triple Crown winner Justify tested positive for a banned substance in a qualifier race before the Kentucky Derby, the New York Times reports.

Justify tested positive for scopolamine, a drug which is used to treat motion sickness and nausea in humans and can act a bronchodilator in horses, enlarging their airways to making breathing more efficient and potentially enhancing performance. The drug test sample was collected when Justify won the Santa Anita Derby and the positive result should have disqualified him to run in the Kentucky Derby, but the California Horse Racing Board eventually dismissed the case.

Horses can test positive for scopolamine due to ingestion of jimson weed (also known as devil’s snare — yes, like in Harry Potter)  which can sometimes be found in straw bedding or hay, and there have been previously documented cases of this happening, however, horses tend to avoid it’s foul odor and bitter taste. The lab results also indicated that the amount of scopalamine detected in Justify’s sample was much higher than they likely would have if they were caused by environmental contamination/ accidental ingestion. [The New York Times]

Ivar Gooden, ridden by Imogen Murray, was awarded the prize for Best Shod Horse at the Land Rover Burghley Horse Trials last weekend. The annual prize honors the craftsmanship and ingenuity of the farrier who shod the winning horse. Ivar Gooden’s farrier, Paul Varnam, took a forward-thinking approach to shoeing the 12-year-old Irish Sport Horse gelding and used hand-forged therapeutic shoes, which would traditionally only be used to help a lame horse, to help the very sound but somewhat conformationally challenged Ivar Gooden achieve optimum balance. This is the horse and farrier’s second time earning this award and you’ll need to be sure to read Fran Jurga’s full report on The Hoof Blog for all the details on Ivar Gooden’s very fascinating hoofwear. [The Hoof Blog]

Attention horse owners in Canada! Your horse may be eligible to receive a free Equine Cushing’s Disease test thanks to Boehringer Ingelheim Animal Health Equine in partnership with Guelph Animal Health Laboratory. Cushing’s Disease, or Pituitary Pars Intermedia Dysfunction (PPID), is primarily thought of as a disease of senior horses or ponies, but it actually affect horses as young as 10 years old. As one of the main causes of laminitis, the debilitating disease of the hoof which is the second leading cause of death in horses after colic, it’s important diagnose Cushing’s Disease as early as possible so that it can be well controlled. When caught early, risk of laminitis can be minimized and prognosis can be very good. [Boehringer Ingelheim Equine]

The Ohio Department of Agriculture (ODA) is restricting the import of horses from counties within states with confirmed and suspected cases of vesicular stomatitis virus (VSV). Though there have been no confirmed cases of VSV in Ohio, the state decided that, with a significant uptick in incoming equine traffic anticipated due to the All American Quarter Horse Congress scheduled to begin in the city of Columbus on Oct. 1, they would take every precaution to keep the state VSV-free. Though the main focus of this restriction is the influx of horses due to the All American Quarter Horse Congress it appear that it applies to any horses moving into or through the state, so do use caution if you plan to go eventing in Ohio! [Horses From VSV-Affected Areas Banned From American Quarter Horse Congress]