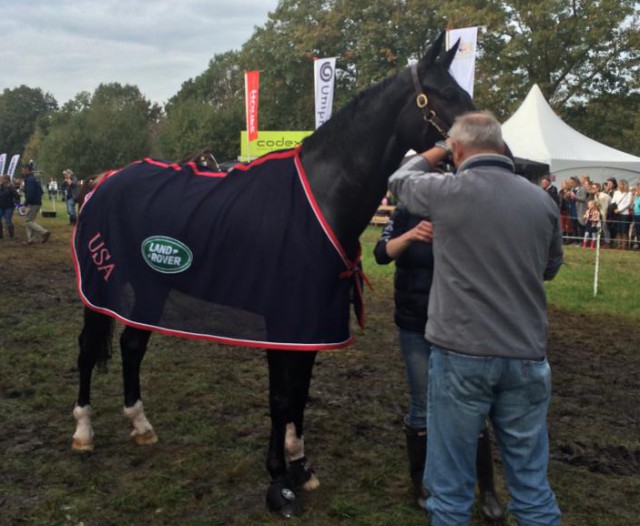 Sixty-six of 89 starters came through the finish line today on Sue Benson’s cross country course at Boekelo. In all, the course seemed to ride fairly well, with seven pairs retiring on course and 12 eliminated. True to this time of year, the mud was rampant but the weather seemed to hold pretty well for the day.

After scoring a 41.7 to take fifth place after dressage, Thomas Carlile and Sirocco du Gers added just .8 time penalties to go into first place upon completion of cross country. This is the Selle Francais gelding’s first CCI3* attempt, and he certainly made quick work of the course as one of the last pairs out for the day. 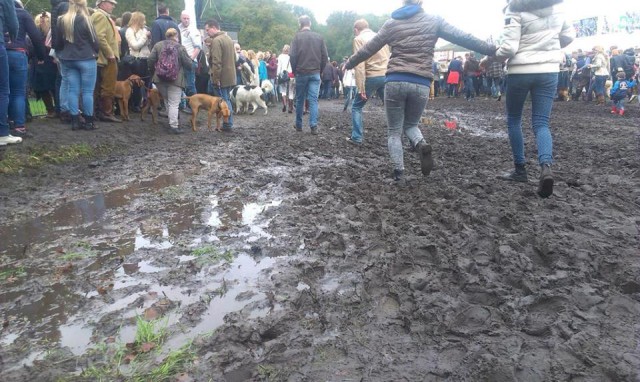 As we reported earlier, Clark Montgomery pulled Loughan Glen into a circle before the last fence after he spooked coming away from fence 27, which resulted in 20 penalties. Clark lodged an appeal with the ground jury upon completion of his ride, as he believed the circle was completely separate from his approach to the final fence.

[UPDATE 11:09 a.m. EST]: We’ve just heard from Jess Montgomery, who informed us that the ground jury is reviewing questionable stops in the order of go. Since Clark’s ride was much later in the order, it could be awhile before we hear the results of his appeal.

[UPDATE 12:38 p.m. EST]: We’ve received confirmation that Clark’s appeal was unsuccessful, leaving him on a score of 64.0 after today’s cross country.

While the ground jury agreed that Clark never crossed his tracks, presented Glen at the fence or passed the plane of the fence, they ultimately decided to stand by the opinion of the jump judge, Jess explained.

Clark would have gone into second place with 8.8 time penalties on a score of 44.0 if his appeal had been successful. Instead, he is in 28th place on a score of 64.0, just above Liz Halliday-Sharp and Fernhill By Night, certainly a heartbreaker after an otherwise strong and confident run.

Unfortunately, Team USA is out of Nations Cup contention after Tiana Coudray’s decision to retire Kinnordy Rivaldo at fence 10A, the first water complex on course. The U.S. contingent did not have a score to drop after Sharon White’s withdrawal of Under Suspection prior to dressage yesterday.

Paul Tapner and Indian Mill currently hold second place, coming home just one second over the optimum time for a score of 46.6 going into tomorrow’s show jumping. Lucy Jackson and Willy Do are in third on a score of 49.2, followed by Tim Price and Bango on a 50.5 in fourth place.

Just one pair made it home within the optimum time: Joseph Murphy and Westwinds Hercules, a 9-year-old Irish Sport Horse gelding that is also contesting his first CCI3* this weekend.

Problems cropped up throughout the course, but the C element of fence 10, the first water, proved to be the most influential, causing three falls and three refusals that resulted in elimination or retirement. Fence 10A also claimed victims, causing one fall and three refusals. Click here to view fence 10 on Uptown Eventing’s course preview.

Fence 18B also caused a bit of trouble to the tune of three refusals. Aside from the first water, the fence analysis (view here) shows the problems were fairly evenly spread throughout the remainder of the course.