Thoroughbred racehorses that go on to second careers are unique in that they have two retirements in their lifetimes: the first from the track and the second from the show ring. Thoroughbred Legends, a new EN series presented by Cosequin, seeks to honor off-track Thoroughbreds that went on to accomplish great things as upper-level eventers and now enjoy a second retirement in their golden years. If you know of a great Thoroughbred for this series, email [email protected] This week, we have a special reader submission from Denya Massey on her sister, Caroline Treviranus' beloved OTTB, Comic Relief. Many thanks to Denya for taking the time to share this wonderful story, and thank you for reading. 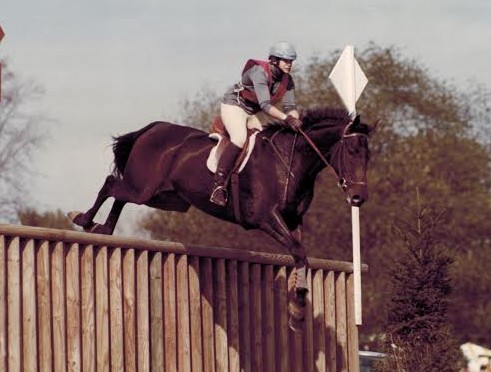 In 1975, Barbara Batterton asked my mother, Marilyn Mackay-Smith, if she would school her 7 year old OTTB, Comic Relief, at Woodley, in Clarke County, Virginia. Registered as “Boncom”, he was a 16.2 solid brown gelding. He had 20 starts, mostly in Ohio, placing second once. Barbara had started Comic Relief with excellent ground work and had shown him locally. When he walked off the trailer that day, our mother thought to herself, “We have to have that horse.”

Our step-father, Alexander Mackay-Smith, bought Comic Relief, or Harvey to his friends, for my sister, Caroline, but to her credit, Caroline repaid him so she could be his true owner because Harvey did something very special. Shortly after Harvey arrived in our lives, another horse Caroline was eventing literally crashed through a fence and fell into the stream on the far side, at the Great Falls Horse Trials, of all the ironic names. The fall smashed both Caroline’s shoulder and her confidence. Unbeknownst to the family, the horse in question had “floaters” in his eyes, limiting his downward vision infrequently. Unfortunately, this was one of those moments. Happily, he went on to a very successful career as a dressage horse. After this crash, her confidence precarious, Caroline wasn’t sure how far she could go.

Caroline and Harvey’s first meeting was less than overwhelming. When shown Harvey for the first time, Caroline’s first reaction was, “Well, what do you want me to do with him?” She thought he was a nice horse with a wonderful gallop and a good but not particularly tight jumper in front. It wasn’t long before she learned Harvey was never lazy or careless, was smart, responded brilliantly to being asked rather than told what to do, and was totally honest and brave. She did confess it was a struggle to get Harvey off his forehand and to use his hind end to carry himself without picking at him on cross country. With experience and gentle coaching from Caroline, Harvey eventually figured out how to gallop uphill and how to carry himself. 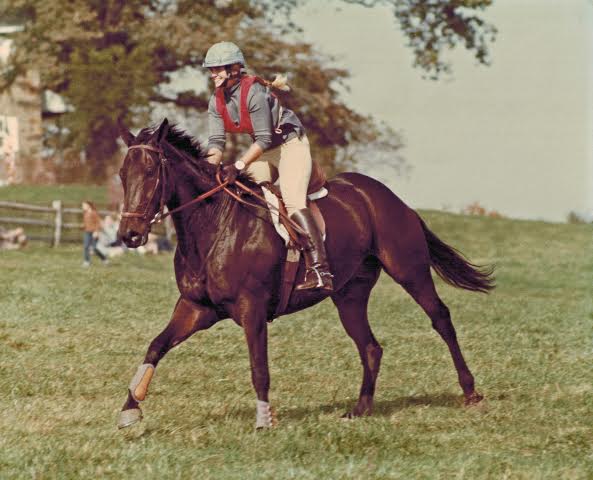 Caroline and Harvey at Radnor. Photo by Leslie Treviranus.

In 1976, taking Cajun and Harvey first to Thomasville, Georgia, to school with her sister, Leslie, and from there, to Fort Rucker, Alabama, to compete both her beloved Cajun and Harvey in his first Open Preliminary.

As she walked the Preliminary course, Caroline’s heart stopped when she saw the third fence; it was nearly identical to the one where she had fallen so badly the year before. But, as Caroline explained, “Harvey jumped it beautifully, taking care of me as I was merely a passenger. When we landed perfectly on the other side, my heart jumped, I stuck my spurs in, and he said, ‘OK, it’s about time!’ That was the very moment my nerve came back, and we won that event by about 30 points. In that moment, I loved eventing again.” That year, of seven events at both Preliminary and Intermediate, he won five.

As Caroline confesses, Harvey wasn’t quite as flawless in stadium because he wasn’t all that respectful of the stadium fences. He did, however, absolutely love being in front of an audience; the bigger the crowd, the better his dressage and jumping. Unlike so many horses, to get him “up” for dressage, she schooled as close to the crowd as she could; he got taller and brighter and proud. He was truly a showman. 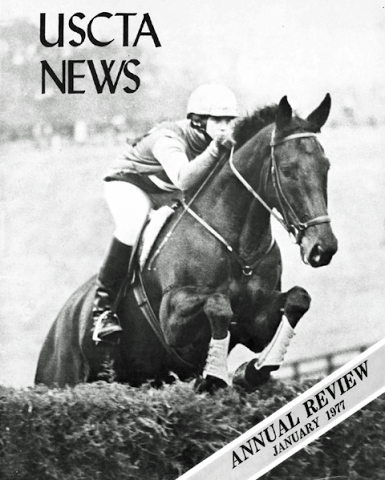 Used with permission from the USEA Archives.

As their partnership blossomed after Fort Rucker, Harvey understood his job clearly and was very willing to do his part, but he expected her to trust him. He loved cross country, and when the going got sticky, Caroline let Harvey have his head to figure it out.  For example, at the Head of the Lake in Rolex 1978, she ran her reins out to leave him alone and let him figure it out. He always looked for the flags and knew where he was supposed to go. He loved steeplechase, but cross country was what it was all about for him. Harvey loved the adventure, the surprise, the challenges, always seeming to ask, “What’s next?” His attitude and work ethic were outstanding.

A series of photographs taken at Blue Ridge Horse Trials in Virginia shows Harvey coming out of a difficult water jump with Caroline unseated, falling off to the left. It was only her spur hooked on the back of her saddle that gave her the tiniest edge to hang on, and with brute strength and sheer determination she pulled herself back into the saddle, possible only because Harvey kept galloping straight in the same rhythm like a gymnastic horse. At the time, Beth Perkins famously said, “I want whatever Caroline had for breakfast!”

Harvey had one competition quirk: he had to travel alone to events to concentrate fully on the job at hand. He was in the ribbons five times when trailering alone, and had no ribbons when with a companion. He was a character in the stable, and had little quirks that most stable managers might not tolerate, but to Caroline it was all part of a big puzzle to create the perfect partnership. He needed to be entertained, so she taught him tricks in the stable. She would park Harvey down the aisle, walk away and come back calling his name. He would swing his head side to side but never move until she walked up to give him a carrot. She would ask Harvey if he wanted Tic Tacs while shaking the container and he would chomp his teeth until he got one. In the stable he would back up and stop with hand signals. Caroline thinks he probably thought he was teaching her tricks, as there was always a lot of head shaking to go with the program, as though he thought he was very funny. 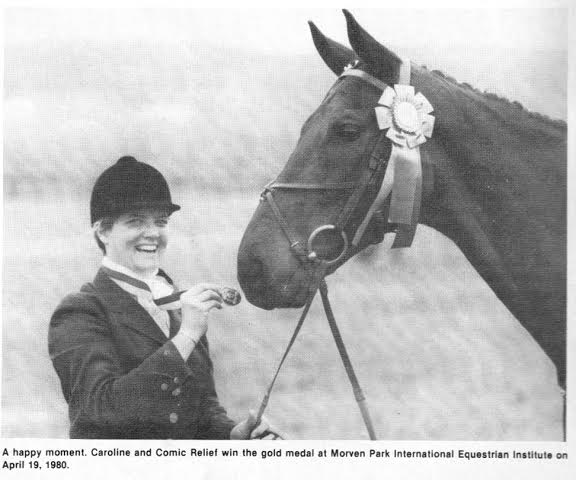 Used with permission from Dressage & CT Magazine. Photo by Gamecock.

Harvey earned Horse of the Year in 1976, and in 1978 was standing in fifth place at the World Championships in Lexington after dressage and cross country. It was discovered later that going into stadium, Caroline had a serious shortage of potassium in her system, and during stadium she was very dizzy, after having told Mary Hazard, “I think I am going to faint,” prior to going in. As she came into the ring, our mother said to our step-father that something was horribly wrong.  She nearly went off course, and coming into the swedish oxer, Harvey took off too early. Caroline didn’t have the strength or reflexes to stay with him, and they landed in the middle of it. To find a silver lining is difficult, but her near fatal fall was the impetus to mandate crash helmets with chin straps in show jumping.

Harvey returned to Woodley while Caroline was rehabbing from her head injury. He had an easy life, and Caroline later had some fun at local events with him, including winning a Combined Test gold medal at Morven Park in 1980. Our mother was determined no one else would campaign Harvey, as it would crush Caroline; he was her horse, and would remain so. He was buried with the very few other special horses, including Caroline’s mare Cajun. 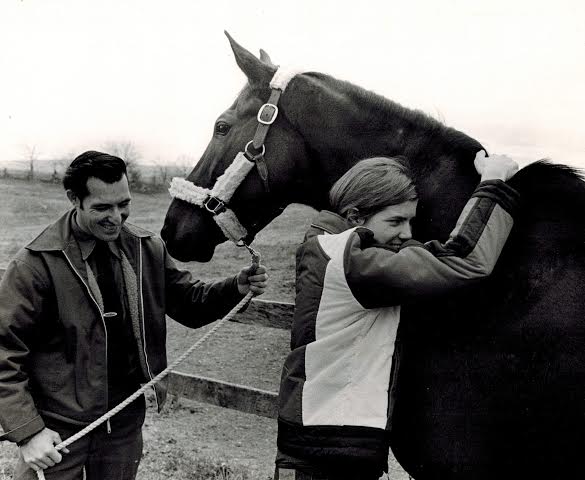 Caroline reuniting with Harvey after returning from Lexington. Photo by Gamecock.

Today, Caroline is married, manages Hickory Stick Stable for Norman Fine of foxhunting fame, and continues to ride, often with her daughter, who is also a wonderful horsewoman like her mother and grandmother.

It’s said Thoroughbreds have great hearts. Certainly from our family point of view, Harvey gave Caroline a gift twice – he restored her love and confidence for eventing in 1975, and then, after their fall in Lexington, he took impeccable care of her when she wanted to have some fun during her recovery. He was a true gentleman, loyal, honorable, handsome, and brave as hell.

Caroline and Harvey are the second pair in this video, narrated by Bruce Davidson Sr., navigating the tricky “Serpent” jump: