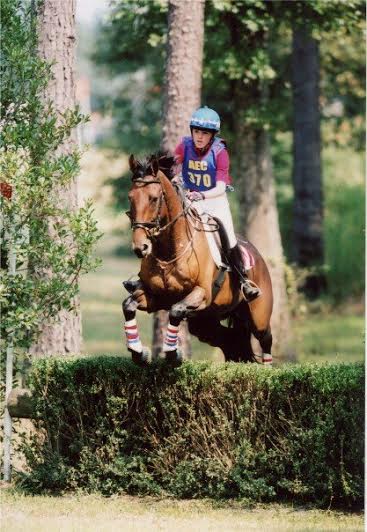 Duane’s Country was born on April 4, 1990, as a bay Thoroughbred colt with absolutely no white anywhere on him. From a modest background, the plain gelding raced in Oklahoma at a small racetrack, never winning a single contest and retiring as a 4 year old with little to no prospects. Luckily for him, he was purchased by Bobbi Pratt and brought into the sport horse world after awhile out in a field for some down time.

In 2002, Carrie Meehan was searching the country for her next mount. At the age of 13, she had outgrown her childhood Quarter Horse and was looking for an upgrade. On the way to Texas with her family, she made a quick pit stop in Oklahoma to try the plain bay gelding, and it would change the course of her equestrian life forever. “I’m sure Bobbie got a good laugh when I rode him the first time,” Carrie said. “Neither Country nor I had any idea what we were doing, but I remember the feeling of his jump; it was so amazing! We even jumped around a few small cross-country jumps that day, which was the first time for both of us. I was totally hooked.”

As soon as Carrie fell in love with the tall, leggy Thoroughbred and brought him home, she realized she might have overestimated her ability to deal with a young, fresh horse straight off the track. He round-house kicked her within the first week and broke so many halters in the cross ties that she had to get a stock of them in the tack room. Country was so head shy from his experiences at the track that Carrie could barely get a bridle on him, even with help from treats and step stools. Two months after the purchase, they discovered that Country had bone chips in a hock and a fetlock and had to have surgery to remove them. 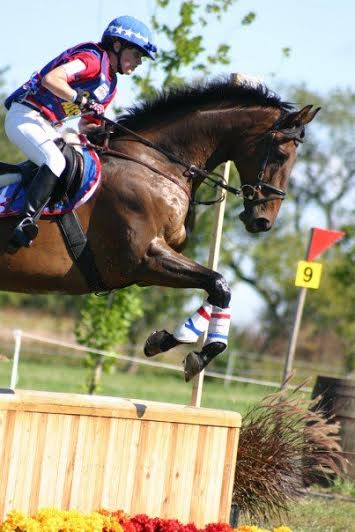 Carrie and Country on course. Photo by Tom Gibson.

Despite all these struggles, in 2003 Carrie decided that they were ready for their first eventing competition. Ever since those first few cross-country jumps, she had been itching to get out there, and Country seemed like a willing partner. “I had cross country schooled him maybe once before, but he hopped around the Beginner Novice course and never batted an eye!” she said. “He was a huge boost to my confidence. I’m pretty sure I just hung on, and he’d jump anything I put in front him.”

Through their willing attitudes and zest for the sport, the green horse and green rider progressed through the levels. Dressage wasn’t really their thing, but cross country certainly was. “I’m sure if I had been able to train him on the flat correctly from the start, it wouldn’t have been an issue, but by the time I got the proper training myself, it was always a battle,” Carrie said. Through the years, they worked their way up the Preliminary level, and even notched a second place at the 2008 AECs in the Training Amateur Division. Country was also responsible for bringing Carrie out to the East Coast to train with some of the top professionals in the sport, exposing her to the wonderful world of upper-level eventing.

As time went on, it became apparent that Country was limited to Preliminary level, and Carrie had higher aspirations. As hard as it was, in 2010 she found a wonderful teenage girl in South Carolina named Kendal Bryan who bought Country and stayed in touch with Carrie consistently. There, he went on to instill great confidence in Kendal and brought her up through the levels to Training once again. 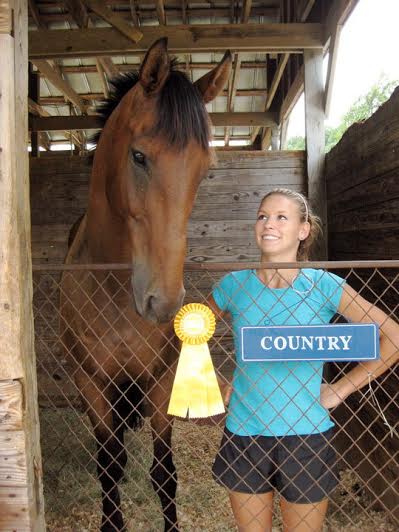 Like many of the wonderful Thoroughbreds that we hear about in this series, Country was single-handedly responsible for igniting Carrie’s passion for eventing and keeping her love of horses alive throughout her life to this point. “Country taught me that you don’t have to have a horse with a big price tag to be successful, as long as you’re willing to work hard,” Carrie said. “Eventing is so much about having that close partnership with your horse, and so much can be overcome if there is that special connection.”

Sadly, in July 2012, Country was struck with a severe case of colic, and the decision was made to euthanize him. Kendal was at his side as he passed. “It gave me a sense of comfort knowing he lived a wonderful life with two little girls who loved him more than life itself, and that’s all I could have really hoped for him,” Carrie said. “He may not have gone to Rolex or won a bunch of blue ribbons, but there is nothing that can replace a horse who gave his heart for the dreams of two little girls who loved him, and for that, I am forever thankful.”