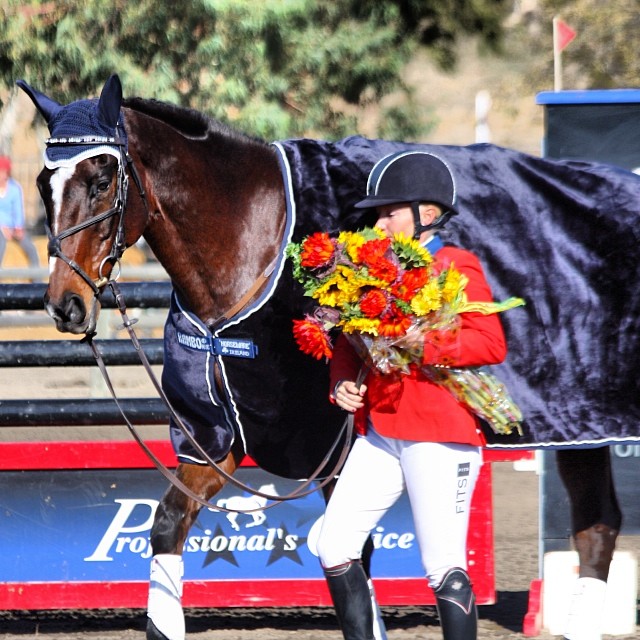 Hawley Bennett and Livingstone during his retirement ceremony in 2013. Photo by Sarah Braun.

Hawley Bennett can barely contain her excitement to talk about Livingstone, the horse she bought as a timid teen who needed a step up from the Arabian she had been riding up until that point. In a fitting testament to the journey she has been on, she called me while out for a walk with her current mare, Gin & Juice, to talk about the horse who really started it all. Livingstone, or Hank as he is more commonly known, was part of a string of OTTBs that Hawley met when she began working for Therese Washtock. Petite and young, Hawley’s eye didn’t linger long on Hank, who was a gangly 4-year-old who was too tall for her to even put a bridle on.

“My mom came up to visit, saw Hank, and immediately asked who he was,” Hawley said. “To me, it was just this long, skinny Thoroughbred who I couldn’t get a bridle on, but my mom said we had to have him. She fell in love with him, and if it weren’t for her, I wouldn’t have had him; she really has an amazing eye for horses.” Early on, Hawley found that she was frustrated more often than not with her new horse. “I had to stand on a bucket to get his bridle on, and I just remember being so frustrated and impatient. But we grew and learned together. It took me a year to get him to properly canter on the right lead,” Hawley said. 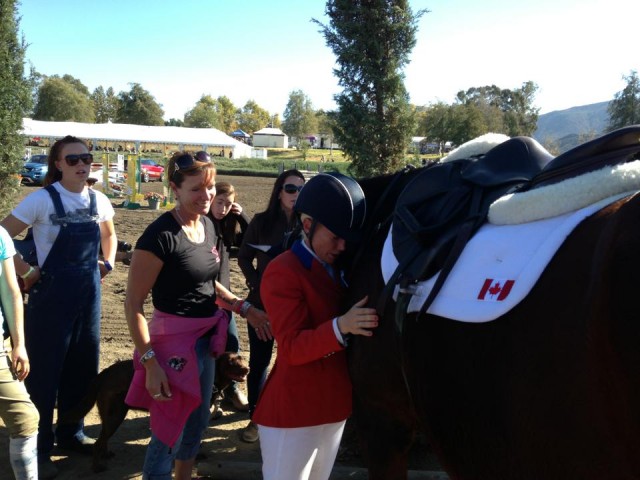 Hawley and Hank during the emotional retirement ceremony. Photo by Gamal Awad.

Hawley stuck with the program, though, and began winning Pony Club rallies on her gentle giant. With the help of coach Pam Arthur, Hawley and Hank made progress, moving through the levels as their skill level increased and their relationship strengthened. In 1998, Hawley competed in the North American Junior Young Riders Championships, where she and Hank took fourth place in the two-star division and were the only pair to go double clear on cross country.

In 2000, Hank suffered an injury to his leg that would sideline him for a year, so Hawley took advantage of the downtime and went to work for Buck Davidson. It was also with the help of Bruce Davidson Sr. and Dr. Brenden Furlong that she was able to bring Hank back from his injury, which had been written off by many other vets as career-ending. Just three years later, Hawley and Hank made their CCI4* debut at Rolex. “I remember riding in the first saddle I ever bought, which was flat with no knee rolls or anything, because I didn’t know the difference at the time,” Hawley said. “I remember Jimmy Wofford telling me that he’d better not see me riding in that saddle ever again!”

Hawley and Hank went on to represent Canada in the 2004 Athens Olympics, at Badminton and an impressive four times at Rolex Kentucky. Hawley credits Hank, along with the help of her mentors and coaches along the way, with launching her career to what it is today. Hank is now 24, although according to Hawley, “He still thinks and looks like a 10 year old.”

Last October at the Galway Downs International Three Day Event, Hawley officially retired Hank from competition. “I tried to retire him before, but he was miserable not working, so I let a few students take him around a few times,” Hawley said. “In fact, he actually took Allie Knowles around her very first Advanced, and she had never even ridden him cross country before competing; that’s how easy of a ride he was.” Livingstone was retired in a ceremony at Galway, with Hawley’s long-time supporters — including Buck Davidson who was there to compete that weekend — present.

Now, Hank still refuses to just lounge in a pasture in his retirement. “We still do dressage and trot sets with him because he hates not having a job,” Hawley said. Hank will teach young and timid riders how to ride and still firmly believes that he is perfectly capable of going out and tackling the biggest courses in the world. “He even thought that he was going in to show jump at his retirement ceremony,” Hawley said. Go Hank.