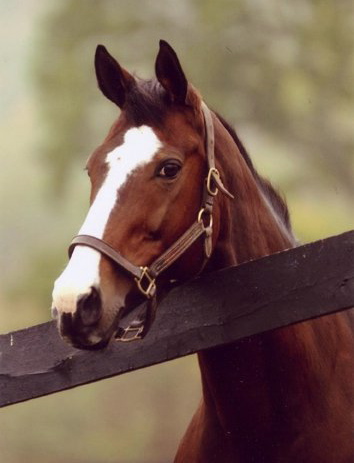 Petal in the field. Photo by Kate Samuels.

The year was 1997, and the small bay filly was born in Virginia, destined for a life at the racetrack. By Gilded Age, out of Dianthus, she sported a huge white blaze and a small hind sock, and was almost runt sized at birth. They named her Gilded Petal, and despite her small stature, sent her off to be a racehorse, hoping that her heart would rule over her size. However, this was not fated to be, and she returned to a farm in Virginia after only a few unsuccessful starts, and was turned out in the back forty for a year.

In 2002, I was a fresh faced teenager of fourteen, and having only recently outgrown ponies, I had upgraded to a horse the previous year. Despite his good looks, this horse was my first introduction to the “accident prone” species of Thoroughbred, and had been sound for a whole two weeks of our first year together. Things were not looking up. My family went on a horse scouting trip to find a mount suitable for both myself and my mother, and we stumbled upon a farm that had several ex-racehorses at affordable prices, sweating in the summer sun in a giant field. It was there that I met Petal, and she changed my life forever.

Petal was quite tiny, and on a good day she stood just shy of 15.3 hands at the wither, and probably 16 hands at the rump. When I got her, she had been in work for a few weeks, and jumped once. Knowing no better, I had jumped her the first time I got on her, and she seemed willing enough. I was under the impression that she would belong primarily to my mother, but after bringing her home, we found that she had an unsettling tendency to rear straight upwards with surprising speed and strength. In an effort to keep my mind off my perpetually lame but beautiful 17 hand bay Thoroughbred gelding languishing in the barn, Petal was given to me as a project, and I dove right in. 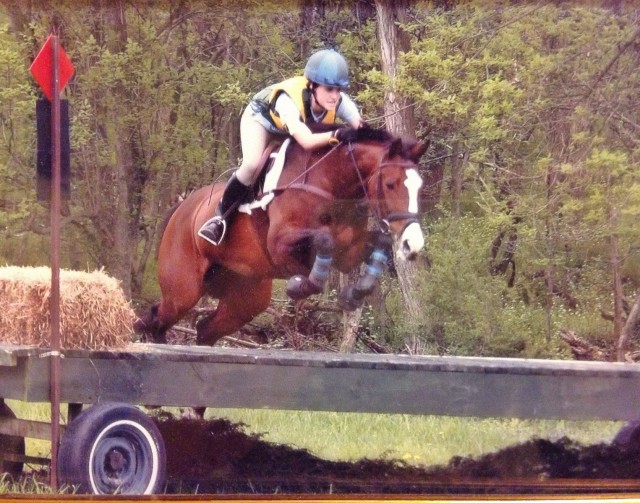 Petal in the Training at Morven Park in 2004. Photo by Joe Samuels.

Petal proved to be a big challenge for a relatively uneducated fourteen year old. I’d never had a horse with so much energy, and I returned to the barn many times frustrated beyond belief. It took a solid six months before she stopped rearing, and I almost had my teeth knocked out a few times. Perseverance was in my nature, however, and I was not about to give up. Once we got going, I knew that I wanted to try Eventing, so my mother found Marcia Carabell, a local rider who in 1993 was both 2nd and 3rd at Rolex with two OTTB horses that she had brought along herself. Marcia was my first introduction to serious riding, and I spent many weekends camped out in her guest room with Petal in the barn.

Together, we learned about flatwork, and how to improve what you have. As a fairly downhill horse, dressage was not her forté, and I had no clue what I was doing, so we never scored as well as we could have. I was lucky in that the mare was a natural jumper, and super with her knees, so I could miss at about anything and she would take care of me. Marcia persevered with us and was our cheerleader as we entered the world of recognized Eventing. I dubbed her “Too Much Tango” in honor of her spicy personality, and got my registration number from the USEA.

In the fall of 2003, we competed in our first event together, Novice at the Virginia Horse Trials, and I swear to you that I have never had so much fun in my life. After conquering Novice, it felt natural to move up a level, and in the spring, without any fanfare, we came out and as our first event did Training level. I specifically remember jumping a trakehner, and having never schooled such an item, literally did not even know the name for the jump. Bless that little Thoroughbred mare, she never batted an eye at anything, and through my own ignorance I didn’t even know how special she was. The only cross country penalty that she ever incurred was when she spooked at a creek crossing on course and I flew over her head, only to land on my feet facing her and holding the reins. Luckily, at that time you could still remount, so I scrambled back on before the jump judge had even realized what happened. 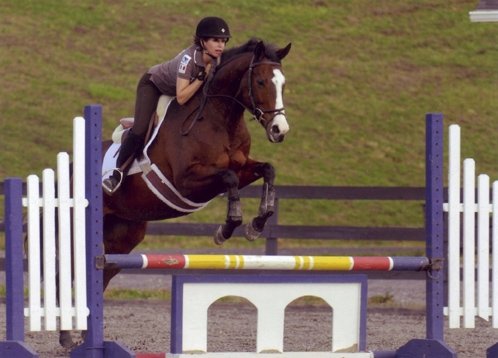 Petal with her new owner in New York. Photo courtesy of Sharon Grelsamer.

At the end of 2004, she took me to my first Preliminary, for which I was woefully underprepared. We barely scraped through the dressage and the show jumping, before I realized that I was in over my head and withdrew before cross country. She was a clever jumper, but we had reached a level where she needed help, and I was still in a stage where I was unable to assist properly. In 2005, she went with me to my first official working student position in Middleburg, where I worked for Stuart Black. This was an enormous culture shock, as I had never really been in a barn full of top level horses, and didn’t fully understand the depth of the sport that I had chosen. My eyes were wide open.

While schooling at the farm in preparation for another attempt at Preliminary, Petal sustained a small suspensory strain, and was sent back to my farm with my parents. Once more, I was horseless, but luckily my status as a working student left me with several horses to exercise each day regardless. Of all the horses there, one was a rogue and disliked by all the riders, and as the youngest student he fell into my lap. This horse, of course, was Nyls du Terroir, and I credit Petal to forcing our introduction and our fortunes together.

Petal was rehabbed from her injury and recovered fully. I made the decision to sell her to a less stressful life, but I was worried about her feisty nature and how a lower level rider would be able to handle it. A wonderful lady drove from New York to try her one weekend, bringing her trainer. They wanted to cross country school her right away, and I was filled with trepidation. The mare was not crazy, certainly, but I knew her as a bit of a fireball. However, as soon as this quiet woman mounted my mare, Petal showed one of the beautiful traits of her breed and instantly adapted to her rider. She poked around, simply popping over small jumps and slowing down afterwards. She never spooked, leapt or showed any sass. She was sold that day.

Petal moved up to New York, and I continued to receive loving updates from her owner regularly. She has been nothing but a superstar, and everybody adores her big blaze and her sweet nature on the ground. In the winter, when turnout is limited due to the snow buildup, Petal is turned out in the indoor arena prior to a ride to “get her sillies out” so she can buck and fart and run inside a bit. I’m thrilled to have found a wonderful home for the horse that took me to my first recognized Events and sparked a love for the sport that none of us could have predicted. A true Thoroughbred, she was perfect in every way for each situation, and exactly what I needed at the time.