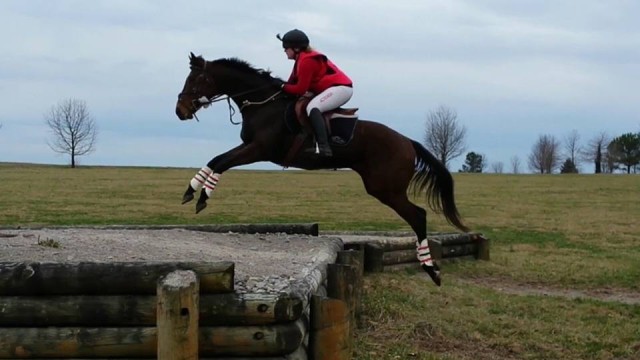 Area VIII eventer Bobbie Jones is having a blast with her her 2017 Thoroughbred Makeover prospect, Proud Royal. The 5-year-old gelding (Kings Blood (IRE) – Proud Owney, by Proud Truth) won twice in 15 starts on the track before retiring to Winchester Place Thoroughbreds in Paris, Ky.

“I met Proud Royal and knew he was coming home!” she says. “He wasn’t the biggest or most fancy horse on the farm, but I just had that feeling about him.”

After bringing him home she realized that he was eligible for the Retired Racehorse Project, so that became the goal. Wanting to try something a little different, she entered him in the Field Hunter and Freestyle divisions. She warns that she has a wild idea for the competition, but it’s top secret for now — we can’t wait to see what you have up your sleeve, Bobbie! 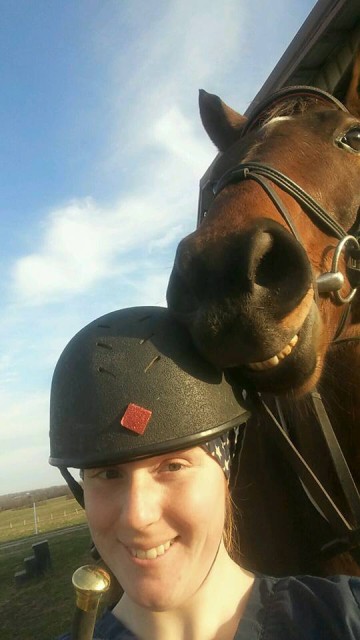 In the meantime, she is savoring the development of their partnership.

“He is such a cool horse!,” she says. “I have very high hopes that he will be my first upper level horse. No matter what I ask him he’s always willing. He’s so chill too. Even from his first ride off the track, he just stood there asleep on a long rein without a care in the world.”

They recently set out for the horse’s very first cross country school — and by all appearances it went swimmingly!

Bobbie took her helmet cam along for the ride:

She explains the story behind his barn name, Dempsey: “Since his sire is Irish, I wanted to name him sometime that reflected his Irish heritage. After a lot of research I decided on Dempsey, which is an Irish name that means ‘proud.'”

They’re taking aim at Spring Bay H.T. for their first event together, and you can follow their journey to the Makeover on Dempsey’s Facebook fan page (which he narrates himself!).

Hey everyone! How’s it going? Soooo, first thing first….I kinda got in trouble today and my girl thinks public shaming…

One more note from Bobbie: “I highly recommend Winchester Place Thoroughbreds for anyone looking for an OTTB project. They take incredible care of their horses and work hard to find them homes to begin their second careers!

Learn more about the Retired Racehorse Project Thoroughbred Makeover here. Does your Makeover prospect deserve to be featured on EN? Email your horse’s story to [email protected]