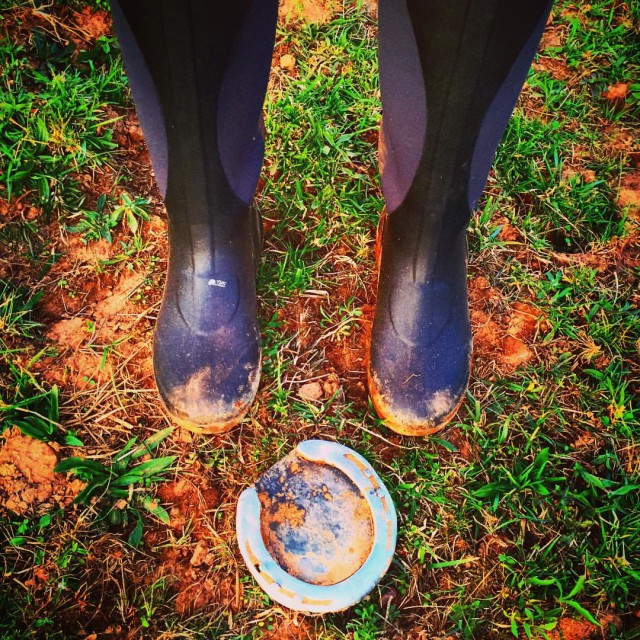 The struggle is real. Photo by Maggie Dupler.

Yesterday, I brought home chickens as a surprise for my mother, and popped them and their new coop into an empty stall in the barn. They’re still little, so they’ll stay there for a week before moving into their outdoor pen, but the side effect is that the horses get to stare at them when they’re stabled during the day.

One of my horses thinks that they’re terrifying little monsters, and the other one (Nyls) thinks that maybe chickens are the most entertaining thing he’s ever seen. Chicken TV! Next thing you know, he’ll have a traveling show chicken, just like some upper level horses have a traveling mini horse. Can you get a yellow card for a loose chicken at a show? Hmm …

Lynn Symansky has chosen to compete at Rolex this spring with Donner instead of heading across the pond to Badminton. After receiving a Land Rover/USEF competition grant to go to Badminton, we were expecting a flying deer in England. However, as he travelled quite a bit last year and hopefully will be doing some more travel later this summer (!), Lynn has chosen to keep the All American Deer on the local 4* circuit. [Lynn Symansky Equestrian]

We are sad to report that Ballylaffin Bracken has been withdrawn from Rolex. Kristin reported yesterday that Rox has sustained a bone bruise, and while he will be back in action later this year, he needs time right now to heal and won’t be able to make a return visit to Rolex. This pair completed Rolex in 2013, 2014, and 2015. Rox is looking forward to some R&R and a fall three day. Best wishes to Kristin and Rox, and we will be sad not to see their faces in Kentucky. [Kristin Schmolze Equestrian]

Would you use a “smart bit” on your horse? In the age of fitbits, technology is now promising to give us a smart bit that measures a horse’s fitness in real time. The smart bit will alert the trainer when the horse’s biostatistics deviate from predetermined physiological set-points, in order to predict and prevent injuries from occurring. Data provided by the bit would include real-time biometric data streams, a composite of the horse’s energy level, and alerts when a racehorse’s physical condition is less than optimal. [Smart Bit Technology In The Works]

Very unfortunately, super mare Zenyatta’s newborn foal has passed away. Lane’s End released a statement yesterday confirming that her 2016 War Front colt died due to complications of meconium aspiration syndrome. Meconium, a foal’s first manure, is typically passed during the first 12 to 24 hours of life. However, it can be expelled while a foal is still in the uterus. If this happens, a foal can aspirate feces during its first breaths. Meconium aspiration can lead to severe pnemonium, systemic infection, and death. [Zenyatta’s Foal]

This week’s KER ClockIt™ Sport session illustrates a Thoroughbred gelding on a 2.5-hour foxhunt. The horse’s speed is depicted in orange, while heart rate is depicted in purple. Overall, the horse spent about half the session walking and half trotting, cantering, and galloping.

When we look at heart rate, the horse spent about 15 minutes above a heart rate of 70%, of which 3 minutes were in the 80-90% range (yellow on the graph). In this zone, there begins to be a significant level of anaerobic energy generation and blood lactate starts to accumulate. This is the zone where many human athletes train to improve fitness.

Using KER ClockIt Sport to record your rides not only gives valuable insights into your horse’s fitness, but now you can also win a great prize! Share your ClockIt sessions for a chance to win the KER and Eventing Nation Share Your Sessions Sweepstakes. For more information, visit the website.