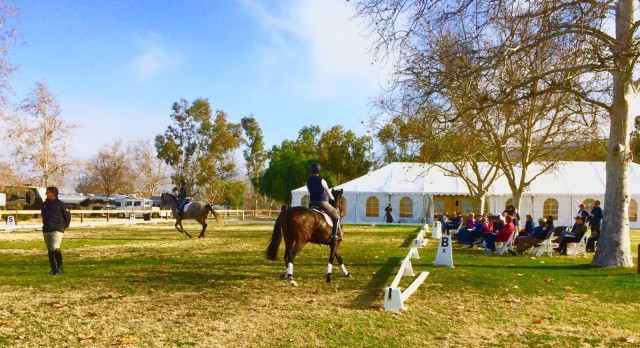 I’m in Virginia, and if you’re anywhere near me right now, you’ll know that people are FREAKING OUT about the snow storm coming our way tomorrow. Supposedly, we might be receiving two feet of snow, which for Virginians is basically the end of the world. Don’t even think about going to the grocery store, because there are approximately 10,000 people in line getting water and canned goods and being extra freaked out and angry. Also, there are literally shelves empty! Guys. There is actually no way you can survive like a day or two in your house with your regular amount of food? I mean, really. I’m not looking forward to slugging through the snow to chip at ice troughs, but there’s always sledding and hot boozy drinks to be had, so it’s not so terrible.

Living on the west coast and looking for some ICP Symposium action? Never fear, we have your back. January 20-21st, Galway Downs in Temecula will host the ICP Symposium with David O’Connor teaching the progression of training for horse and rider, as well as Shannon Thompson educating us on transformative leadership and developing a winning culture. Auditor spots are open on both day for instructors, riders, owners, grooms, family and friends! Come one, come all! [2016 ICP Symposium]

Maybe you can be the next CEO of the USEF. Chris Welton has left the post to pursue other interests, and Bill Morony, president of the USHJA, has taken up the role as interim CEO until the permanent replacement can be found. Should be a nice, uncomplicated job for those interested. [USEF Seeks New CEO]

A shetland pony caused mayhem this week at the Gloucestershire Airport. The naughty pony escaped and galloped as fast as he could around the runways. After much work, the airport workers were able to corral him and return him to his owners, as he had escaped from a nearby farm and somehow gotten through the perimeter fence, despite no holes or obvious access points. Ponies. [Shetland Pony Invades Airport]

Hot on Horse Nation: Why Your Horse is Better Than Your SO