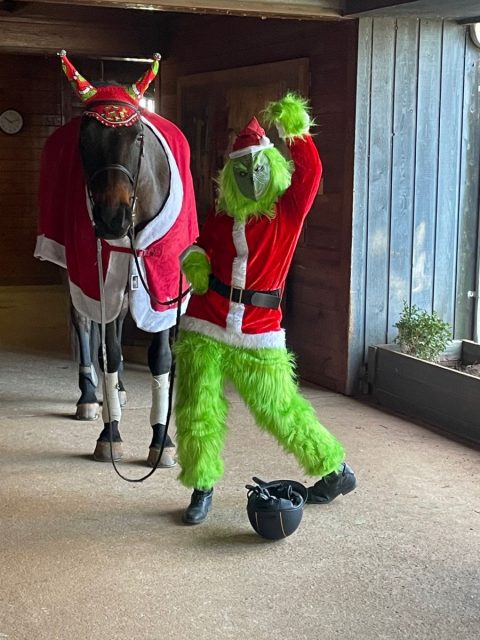 The grinch came to the barn! Photo by Kim Green

Yesterday I had my personal Christmas miracle, when after frantically grocery shopping at four different stores for my ambitious holiday dinner plan, I stopped at a gas station before heading home. At which point I put my wallet on the roof of my car, and drove home. Three hours later, I realized the disaster, and drove back to the gas station to ask if anybody had found it. No luck. However, several miles down the road on my way home, was my sweet little wallet on the side of the highway. Apparently karma decided to swing my way, and I’ve never been more thankful.

Don’t forget to enter our Ultimate LRK3DE Giveaway! You and three friends could win tickets, premium tailgating for cross country, a travel voucher valued at $750, and Dubarry gear for the trip. Entries are open until 12/31, so don’t delay! [Fly Away to LRK3DE]

The biggest determining factor of getting around a course successfully is having the horse in front of the leg, and thereby having the quality of canter to indeed tackle all of the obstacles with both power and balance. In this episode of Thoroughbred Logic with Aubrey Graham, she discusses what it really means to be in front of the leg, something you maybe didn’t consider a problem with thoroughbreds, but most definitely is an issue. [In Front of the Leg]

The 2022 MARS Maryland 5 Star at Fair Hill led the way in collecting and keeping horses’ medical records secure and organized this year. The competition’s veterinary team used Equine MediRecord (EMR) to collect required health information for horses competing in the U.S. Eventing Association’s Young Event Horse East Coast Championship. The EMR system helped the veterinary team at the Maryland event determine which of the horses entered in the Young Event Horse East Coast Championships were compliant with vaccination requirements and other health paperwork. Ninety horses were listed on the starting orders for both the 4- and 5-year-olds. [Equine MediRecord Digitizes Equine Health Records]

Nicola Wilson said she is delighted to join the coaches on the Wesko Equestrian Foundation, which is expanding to benefit more young riders. The European eventing champion joins top names including Pippa Funnell and World Class performance manager Dickie Waygood to provide coaching, advice and support. The foundation, set up in memory of eventing owner Christina Knudsen to support eventers from all backgrounds, has announced its expansion, aiming to support 60 young riders. [Nicola Wilson’s Next Steps]

Suppose your Christmas stocking contained a ride on the horse of your dreams… Which superstars of yesteryear this top rider would love to try? Mary King, a six-time Olympian who counts Badminton, Burghley and Kentucky wins on her record – along with a seriously impressive medal haul – admired a certain grey superstar who took the showjumping world by storm. [Mary King’s Horse Wishlist]

Video of the week honestly: