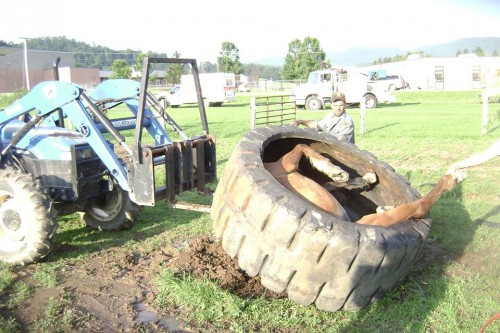 Did you guys hear about the horse that got stuck in the giant tire? No, seriously. Rowdy the horse from West Virginia somehow managed to get himself inside a gigantic tire and completely stuck. Firefighters had to be called to the scene and extract this  strange horse from his rubbery cage. Horse Nation obviously snatched this little gem of a story up, and has the full report plus a video. Amazing. [HN Horse Stuck in Tire]

In case you missed it the first time, Buck has withdrawn Reggie from the CICO3* at Aachen, and has been replaced by Marilyn Little & RF Smoke on the Water. Reggie will be back in short order, so don’t worry. This is the first year that the US has been able to field a team for this competition, which is very exciting. Tiana & Finn, Will Faudree & Pawlow, and Clark with Universe fill out the rest of the team. [USET Press Release]

This week’s Eventing Radio Show is all about horse syndication! Got questions? No worries! Samantha and Jess cover syndication from A to Z in this episode, with conversations with riders syndicating their first horse, a current owner, a lawyer and the mastermind behind the USEF Eventing Owners Task Force.  Don’t miss a minute! [ERS Episode 253]

Preakness runner-up Itsmyluckyday has been sidelined with a minor fracture of his pelvis. “I’m told the success rate of a full recovery is outstanding,” says trainer Eddie Plesa Jr.  “I heard that of 29 horses that have had this issue, 27 of them came back to run just as well as they had before, so that’s very promising.” Fingers crossed for the 3 year old colt to be back in full health soon! [Itsmyluckyday Sidelined]

Both Carl Hester and Charlotte Dujardin claimed top three places at Rotterdam CHIO yesterday. They both rode in the CDI3*, with Charlotte competing Uthiopia and Carl riding Dances with Wolves. Tomorrow, Charlotte will compete the record breaking Valegro for the first time since her world domination of Olympia last year with him. [Carl & Charlotte: Unstoppable]

Remember Pavlov’s dog from high school science? Scientists have shown that the response shown in the famous “Pavlov’s dog” experiment can be replicated in horses, but have taken the research a step further, showing that individual temperaments play an important part in each animal’s response. The findings of the study further add to a growing body of evidence suggesting the importance of matching temperaments to disciplines. [Pavlov’s Horses]