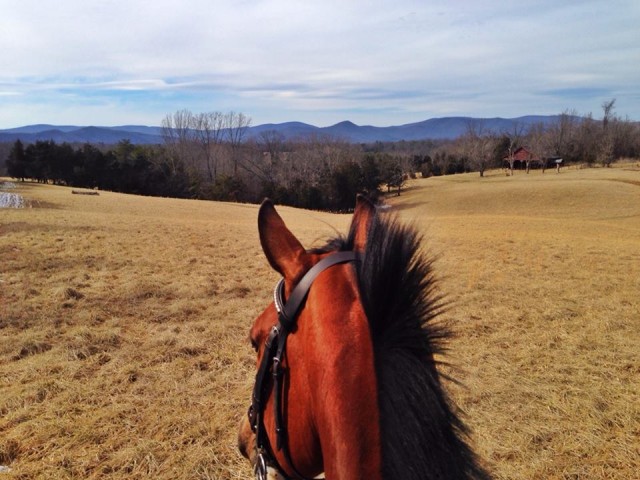 The last ride I got before the snow came down in VA….hope you like snow days prior to your 3* Nyls!

Good morning from the Carolina Horse Park! It’s positively an EN party down here, as we have Jenni and Sally reporting live for you all weekend, I’m here competing, and Ellie is also here grooming for Plain Dealing Farm. The *secret* plan is for me to strap a helmet cam on my head and zoom around the 3* course for you later today, so you get a first hand feel of how the course would run if you were riding a super fast miniature horse. Cross your fingers that the organizers let me on course!

Zara Phillips wastes no time in getting back in the saddle, as she has 7 horses entered in Hambleton HT, just three months after giving birth to her daughter. Girlfriend has got this timed down to the T, because she wants to be on the WEG team this summer, and is looking to win back the championship title that she won in 2006 with Toytown. I wouldn’t bet against her. [Zara Phillips Baby Comeback]

You’ve heard about the first ever equestrian being sponsored by Nike, right? Well, if you haven’t, here’s the scoop. Eighteen year old NAJYRC gold medallist Ayden Uhlir has officially become the first US equestrian to be sponsored by the famed sports company. I really hope that this will bring more mainstream notice to the equestrian sports, and now all we need is an Eventer! Hey, Nike, what’s up. I’m here, I’m totally willing to wear a swoosh on everything I own. Hell, I’ll even clip it onto my horse. [Young Rider Sponsored by Nike]

In other news, here’s a pretty awesome cause that’s chinchilla approved. This Kickstarter campaign is trying to raise enough cash to translate Ubongo Kids — Tanzania’s first homegrown cartoon series that helps kids learn through math, cultural stories and songs — from Kiswahili to English. Nothing against Dora the Explorer and Bob the Builder, but this seems like a pretty cool way to help kids learn in a new and different way. [Kickstarter]

There’s a new dope testing technique that’s said to be a thousand times more sensitive than the current tests used for the FEI. While this might be controversial for those who already think that the FEI drug rules are a bit overreactive, this test is exciting for the science nerds out there. While most tests now use mass spectrometry to find components of banned substances, the new method uses something called paired ion electrospray ionization (PIESI), and it gathers several of the drug bits together, making them more obvious to the detector. [New Drug Tests]

We’ve heard about water treadmills and their positive effects on fitness regimes, but what about water therapy for back pain? A new study on the biomechanics of the back during water workouts show that it’s beneficial for horses that experience pain and even shows that it increases overall flexibility through a number of points on the spine. Different depths of the water flexed different parts of the horse, and thereby giving more information to owners who have specific problems and can adjust the height of the water accordingly. [Water Therapy for Back Pain]