Getting your wisdom teeth extracted is a miserable experience, but at least some good comedy can come out of the ordeal. You’ve seen the original David After Dentist video that put post-sedation wooziness on the map and, slightly more recently, some conniving big brothers that convinced their poor sister that a zombie apocalypse has befallen them while she was still groggy. In case you’ve ever wondered what comes out of an event rider’s mouth during that dream-like state, wonder no more thanks to Area II eventer Maddie LeBlanc.

Maddie had her wisdom teeth out earlier this week and sent us two videos of the post-anesthesia aftermath. Naturally, all she could think about upon waking up was her horse, Hook, and their upcoming event at Fair Hill. She shares:

“The first thing I was concerned about was my horse hurting himself or him missing me and making sure that he would practice his dressage tests since we have a show coming up in a few weeks (obviously these were priorities). Luckily my parents videoed me because I don’t remember anything! In the first video I asked my parents to film a video to show my horse so he wouldn’t be scared and in the second video I ask to make sure he practiced the dressage test! I hope to you find these as entertaining as I do!“

We salute you Maddie, and hope Hook still got to share that pumpkin with you! 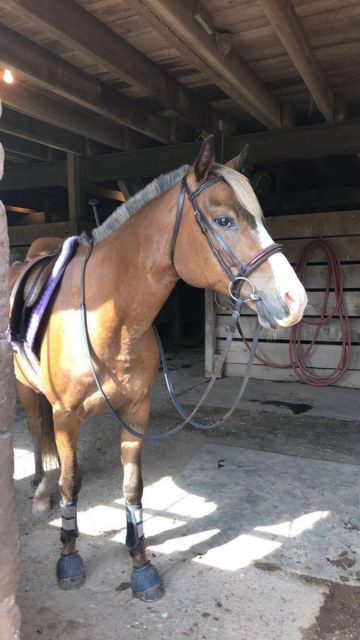 The horse in question. Photo courtesy of Maddie LeBlanc.