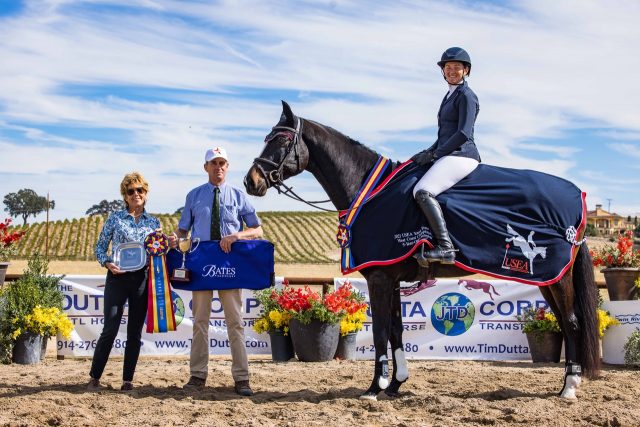 Congratulations to Lex D, winner of the 2021 5-year-old Young Event Horse West Coast Championships! The Dutch Warmblood gelding, ridden by Amber Birtcil and owned by Cellar Farm, scored the highest of the 13-horse field at the Championships, which took place over Halloween weekend at Twin Rivers Ranch in Paso Robles, Calif.

YEH judges Chris Ryan from Ireland and Debbie Adams from the U.S. scored the horses in three sections: conformation/type, dressage, and jumping test/gallop/general impression. Lex D scored highest in conformation/type with a 9.7 out of 10 and combined that with the second-best dressage score of 16.6 out of 20 and fourth-best jumping score of 66.6 out of 70 for a total of 92.9.

“My goal all year with him was to do the 5-year-old Young Event Horse [West Coast] Championships,” Birtcil said. “I knew he had a great amount of talent and it would be a great showcase for him to show that off in.”

Have a youngster you’d like to show off? You can learn more about the USEA YEH program here.