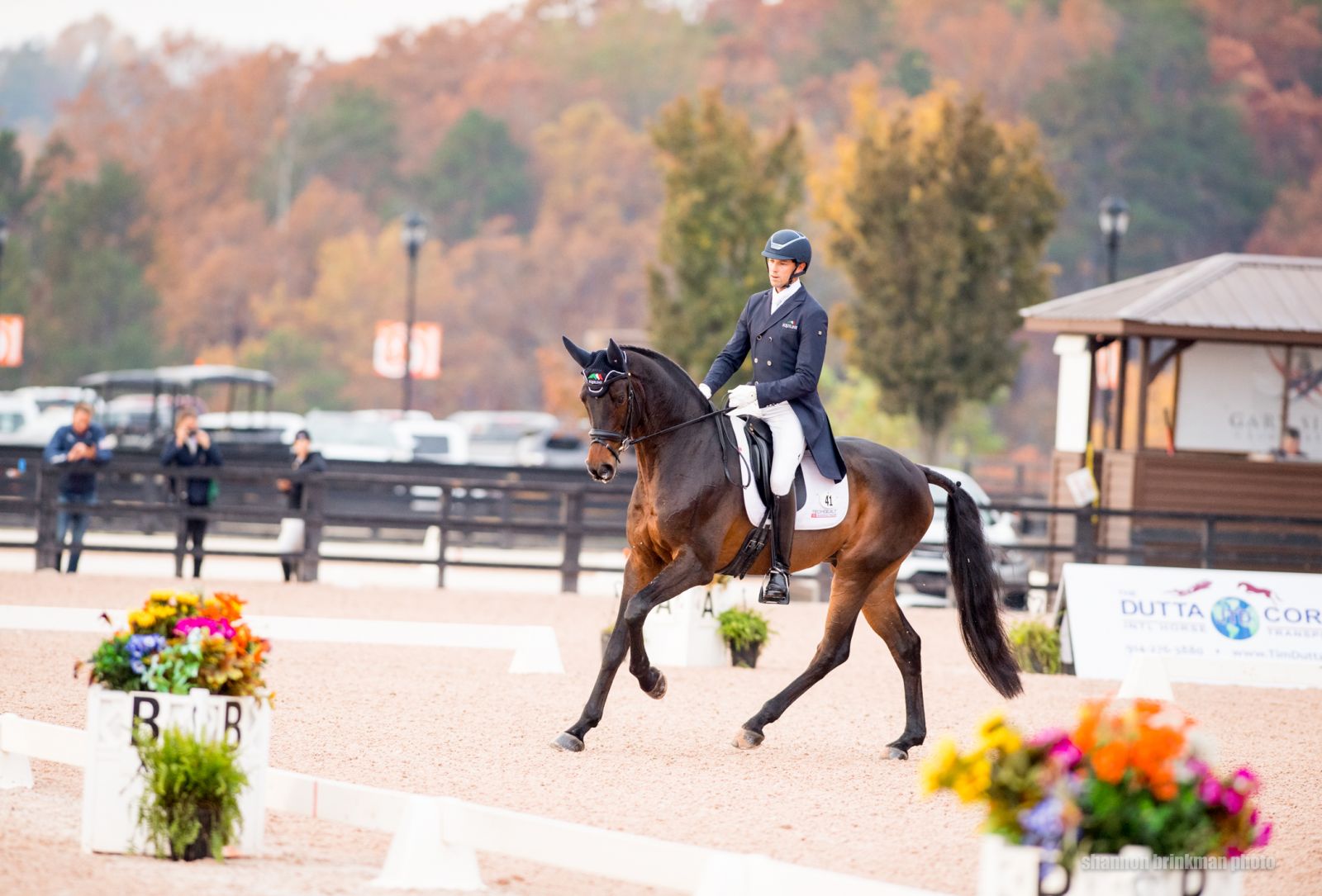 The 2021 season winds down in earnest this weekend with the final international event stateside at The Dutta Corp. Tryon International Three-day Event. The weekend is jam-packed with action, featuring the USEF CCI4*-L Eventing National Championship along with the Adequan/USEF Youth Team Challenge East Coast Final. FEI levels from CCI1*-L up are also offered, making it a true destination experience for eventers looking for one last big run before the holidays kick off.

The CCI4*-L roster this year is a bit smaller than years past, simply due to a busy calendar that saw several new events added — including the inaugural CCI4*-L at Morven Park as well as the Maryland 5 Star last month — providing more options than ever before for the Advanced horses. As many of the more experienced horses have already wrapped their season at Maryland, the path has been opened for a rising star to make his or her mark on the weekend — in fact, 10 horses in the 4*L are making their debut.

Will Coleman had the unenviable task of riding first this morning in the chill before the judging panel of Robert Stevenson, Tim Downes and Lynda Ramsey aboard the 9-year-old Holsteiner gelding Chin Tonic HS, who is owned and bears the moniker of Hyperion Stud. But despite a green spook on entry and a general feeling of “a little on edge”, the striking gelding earned a mark of 26.0 to take the early lead and would never be challenged through the remainder of the division. This is the 4*L debut for Chin Tonic HS (Chin Champ – Wildera, by Quinar), but he’s found success before at this venue, having won the 3*L here last fall. 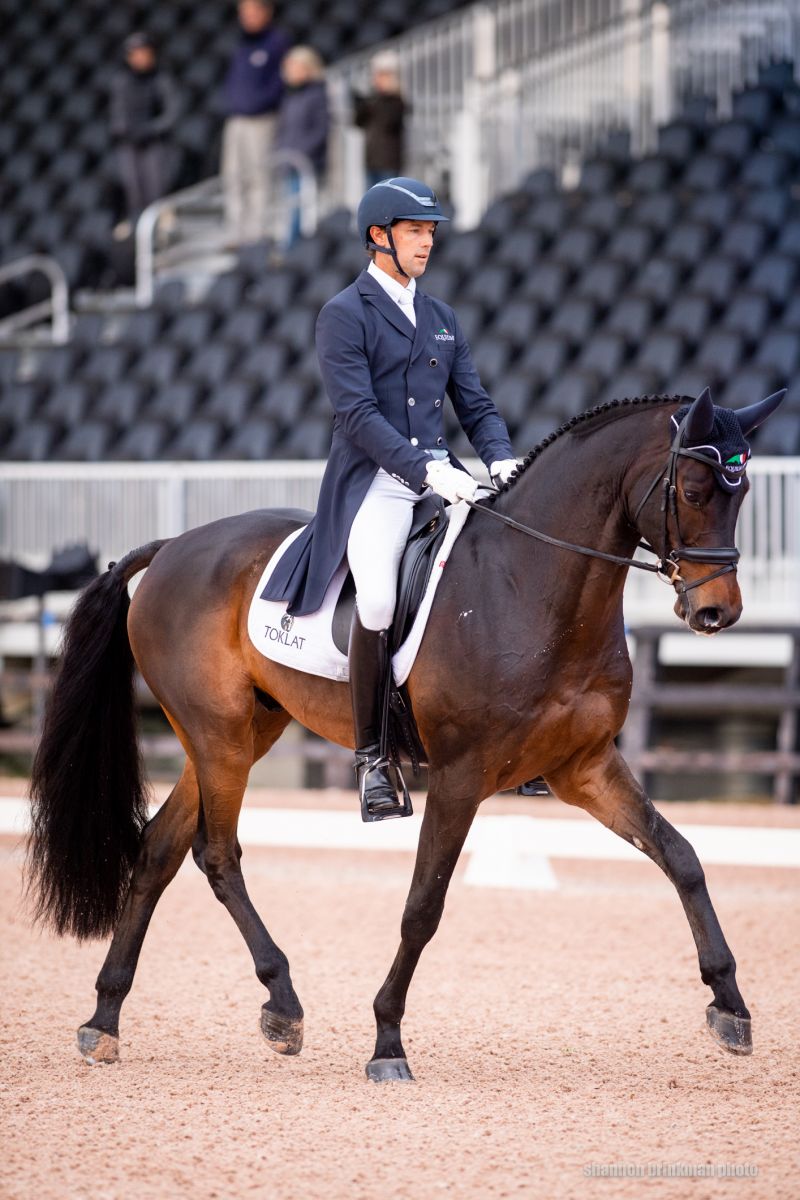 “He was a bit on edge the whole test honestly,” Will reflected. “He’s a very workmanlike horse in that he doesn’t ever totally lose it, but that arena is very hard to get the horses to settle in — it’s just a weird sort of atmosphere. So he was just a little uncomfortable in there, but he can make up for a little bit of spookiness just because he’s so beautiful and such a quality mover. His star quality just sort of outshone his greenness and a bit of spookiness. He’s still a baby in a lot of ways and I’m just trying to do right by him. It wasn’t maybe his best work but we’re excited for his future and I think he’ll continue to get better. We learned some things from today that will help us going forward.”

Chin Tonic, who was originally sourced in Germany as a two-year-old by Hyperion Stud owner Vicky Castegren, is coming off a win in the Notting Hill Invitational show jumping competition in Ocala as well as a win in the CCI4*-S at Morven Park in August. With this being his first 4*-L, Will says he’s still evaluating Captain Mark Phillips’ track for Saturday to formalize his plan but he feels “Chin” is up to the challenge. “For this horse it was mostly about timing (to choose to come to Tryon) and getting a four-long under his belt hopefully gives me some more flexibility next year in terms of what we want to do with him,” he explained. “I think we brought him here because we think he’s ready to do it. We want to go out there and give him a positive ride. He seems to be in good condition and I don’t think we have any expectations, we’re just going to ride him the best we can and give him a good experience.” 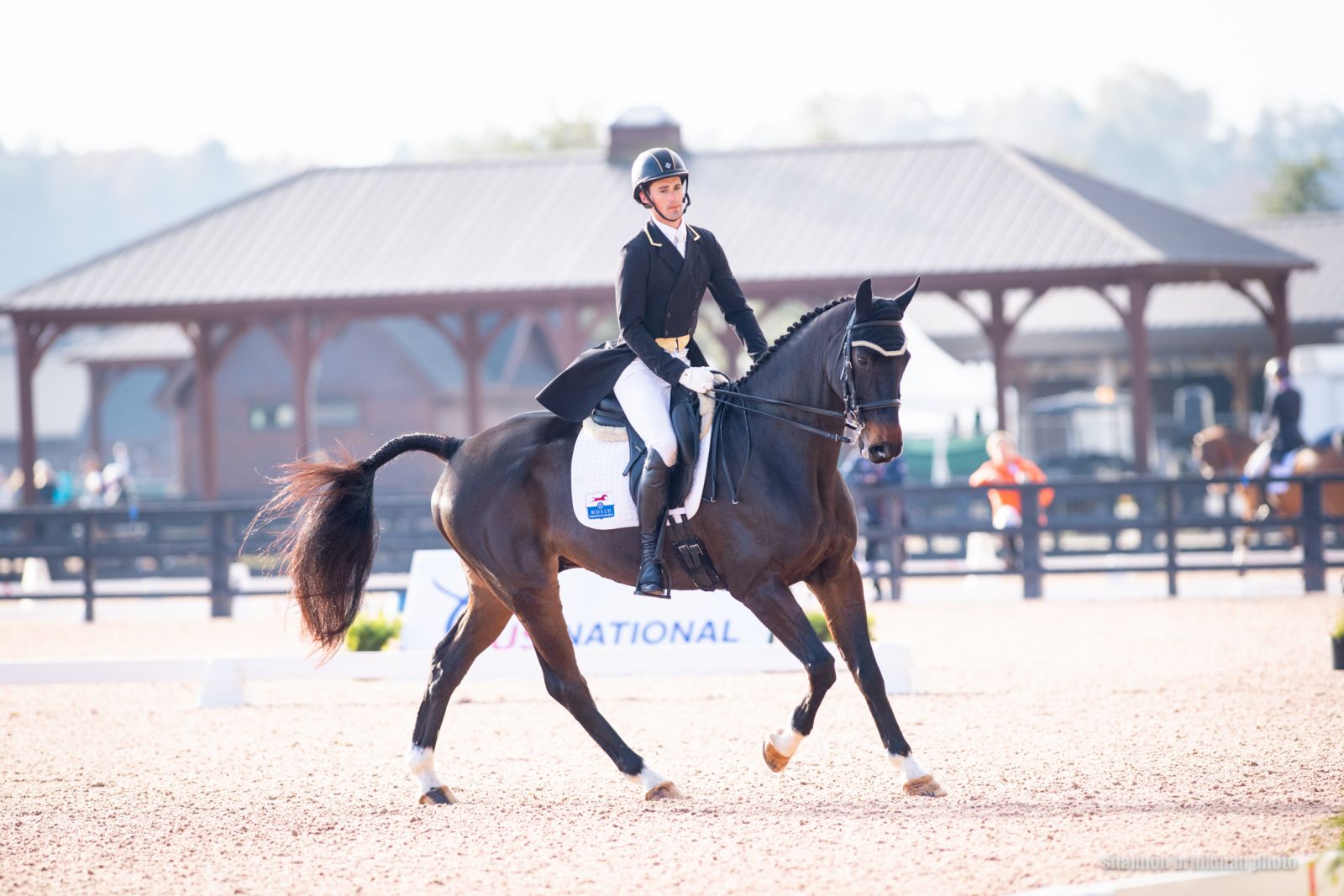 Third here in the 4*-L last year were Woods Baughman and C’est La Vie 135, a 13-year-old son of Contendro I, and they’ll sit second early on here after scoring a 29.4. It’s been a bit of a season of growing pains for Woods and “Contendro”, who won the CCI3*-L at Fair Hill in 2019 and subsequently struggled with control and rideability across the country as they stepped up to the Advanced level. But Woods, who bases and trains with Sharon White in West Virginia, patiently went back to the drawing board this year, stepping down a level to test the brakes and boost confidence. Now, the pair seems to be getting onto the same page once more — they finished second on their dressage score in the CCI3*-S at Morven Park in August and fourth in the Open Intermediate at Hagyard Midsouth last month.

Taking third place into Saturday’s cross country test will be Sharon White with her own Claus 63 (Catoo – Tina II, by Levisto), who is also seeking his first 4*-L completion after two unlucky runs earlier this year. Morven Park was the last attempt at the level for the 9-year-old Holsteiner gelding, who was sourced in Germany by Dirk Schrade, and despite the parting of ways this pair experienced there Sharon was nonetheless pleased with her up and comer’s tackling of all the hard questions. This weekend, then, is a late addition to the calendar, but Claus’ competitive score of 29.9 is his best at the 4* level to date, putting him in good position to have a “third time’s the charm” type of weekend. Sharon will also pilot her stalwart partner, Cooley On Show, in the 4*-S this weekend. 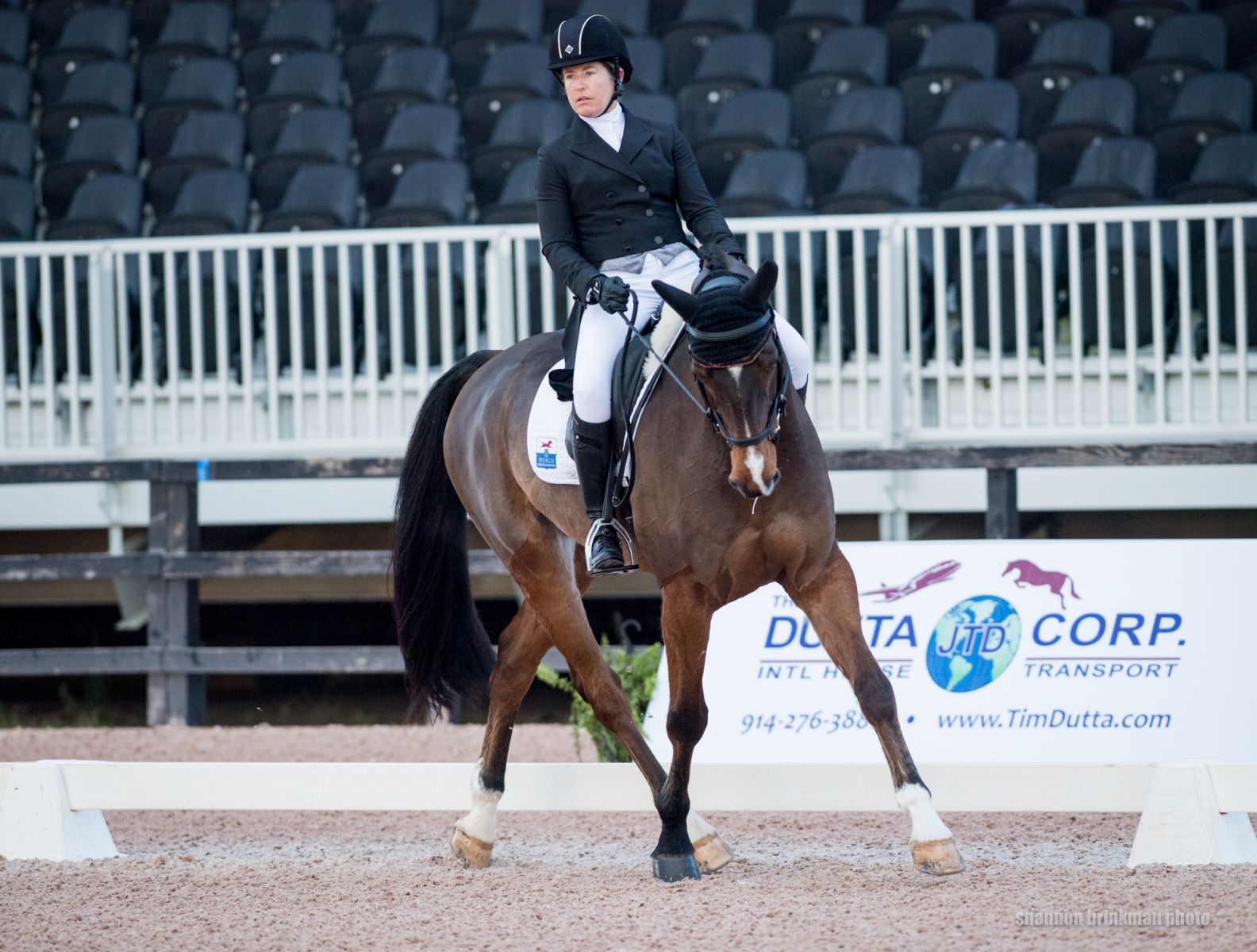 Leading the way in the CCI3*-L is Buck Davidson, who unseated the lead held by Dan Kreitl for most of the day with Sami Crandell’s 7-year-old Anglo-European gelding, DHI Showman. Scoring an international personal best of 26.1, this pair will lead the 36-strong division, with Dan Kreitl and Horales in second on a 27.5, followed by Ariel Grald completing the top three with Forrest Gump 124 on a 27.7.

The CCI2*-L and CCI1*-L also got underway today, though we’ll see the completion of these divisions’ dressage tests tomorrow. These divisions are also host to the Adequan/USEF Youth Team Challenge East Coast Final, where three CCI1* teams, six CCI2* teams, and two CCI3* teams — along with several individuals — are competing for their respective areas. The Youth Team Challenge is a new offering from USEF this year, replacing the former North American Youth Championships with an East and West coast series culminating in a final on each coast; Galway Downs hosted the West coast final last weekend. 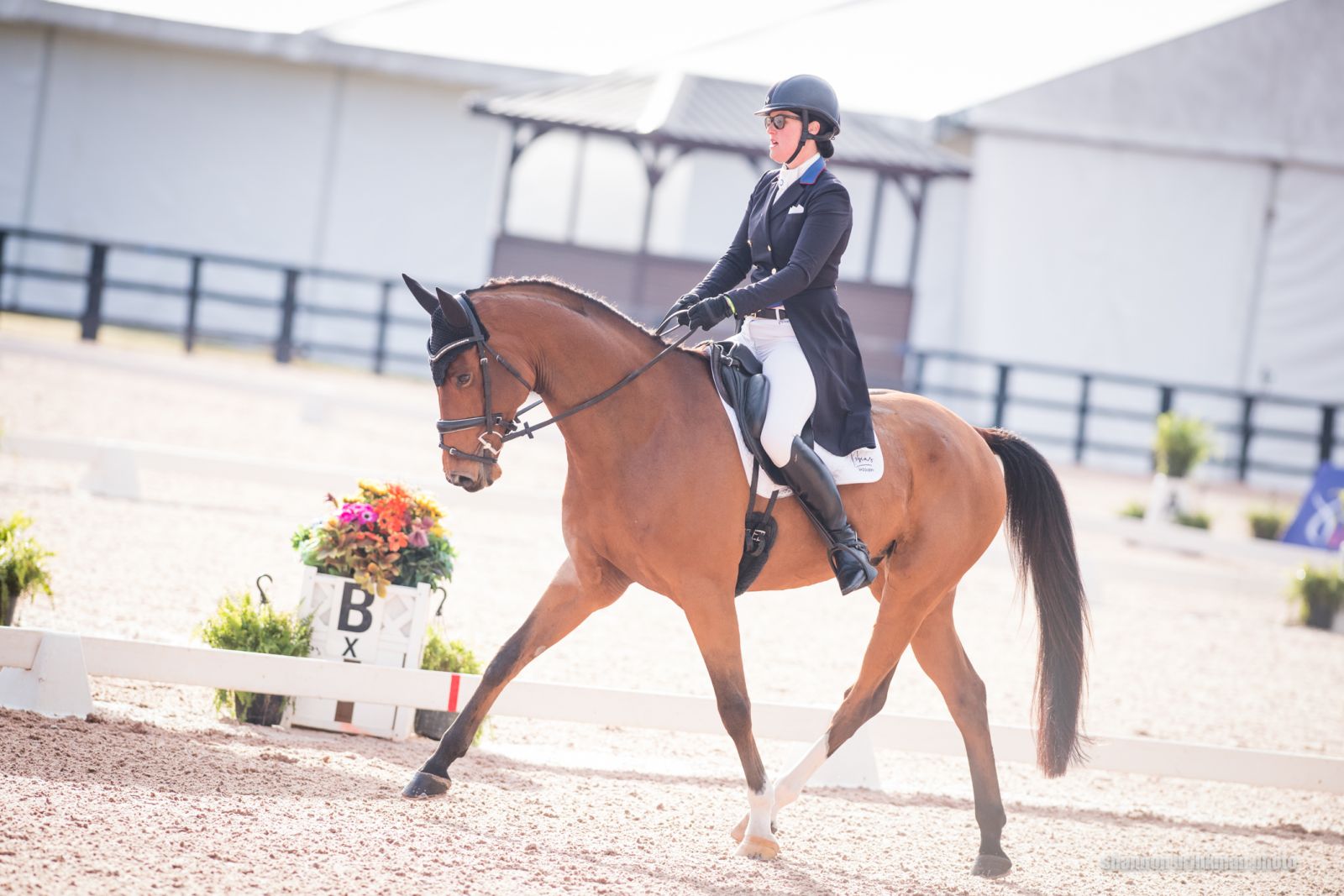 Maya Black and Miks Master C, sitting fourth in the 4*-L on a score of 30.2. Photo by Shannon Brinkman Photography.

The 2* and 1* teams will compete their scores tomorrow, but in the CCI3* it’s the scrambled team representing areas 2, 3 and 8 leading the way on a collective score of 96.1. The leading team consists of Alex Baugh and MHS FernhilL Finale, Elizabeth Bortuzzo and Belongs To Teufer, Ben Noonan and Keep Kitty, and Sarah Bowman and Altus Louvo. Just two teams are contesting the 3* YTC Final, but currently the two are separated by a mere 15.2 penalties, so a bit of time on Saturday could easily flip-flop the two teams. Second placed in the team competition is the team representing areas 5 and 6: Kit Ferguson with Kiltubrid Tom, Zara Flores-Kinney and Elusive Dassett, Barrett Phillips and Whole Nine Yards, and Savannah Gwin and Glock Pullman. We’ll have much more to report on once the teams’ dressage scores are completed in this competition tomorrow!

In the meantime, leading the way in the early going in a massive CCI2*-L is Tik Maynard with the 10-year-old Dutch Warmblood gelding, Galileo, who earned a very competitive 21.4 to take a handy lead over second-placed Ayden Schain and Fernhill Hole Shot (26.3). This is the second trip to Tryon to contest this division for Tik and Galileo — they were fourth in the CCI2*-L here in 2020. Most recently, they won the CCI2*-S at the inaugural Event at TerraNova.

Last but not least, Boyd Martin, who’s enjoying what you could call a comparatively light weekend here with just three rides, will lead the way after day one aboard Sherry Pound’s Gestalt, a 9-year-old Mecklenburg gelding making his FEI debut here at Tryon. This pair earned a score of 27.3 for the early lead, but in both this and the CCI2*-L divisions there is still much dressage to see on Friday so the top of the leaderboard could still shuffle a bit ahead of cross country.

I am making my way to Tryon tomorrow, so I’ll have much more for you both here and on our Instagram page through the rest of the weekend. Tomorrow’s action includes CCI4*-S dressage as well as the conclusion of CCI2*-L and CCI1*-L dressage. Saturday we’ll see the jumping action, with the the Long format divisions running cross country and the CCI4*-S show jumping. Don’t forget, you can tune in live on USEF Network all weekend long! Stay tuned for more, and thank you as always for following along!