Jane DaCosta founded Metropolitan Equestrian Team in hopes of giving people the same dream she had growing up: riding horses. Her goal to provide children—regardless of their socioeconomic background—with the chance to ride and pursue educational opportunities inspires us to break down boundaries and pay it forward. #wework #BlackOwnedandProud #BlackHistoryMonth

Jane DaCosta rode her bike down Ocean Parkway in Brooklyn, Ny., the major thoroughfare that once played host to equestrian bridle paths filled with horses both owned and rented from local stables. While those former vestiges of a pre-automotive lifestyle had faded, 12-year-old Jane still found what she was searching for that day: a connection to horses.

Raised by her mother, an immigrant from Guyana, Jane fell in love with horses on a trip to a dude ranch, but her mother’s response to her request to start riding? “Good luck! Go ride your bike down Ocean Parkway, go find yourself a horse.” Indeed, money was tight, but opportunity wasn’t, and Jane found herself under the wing of a New York City police officer who opened the door to the world of horses. Jane has never looked back.

In 2010, Jane founded the Metropolitan Equestrian Team (MET), a nonprofit organization aiming to provide youth with horseback riding and educational opportunities, regardless of their socioeconomic status. Today, MET has expanded to six other states and has provided over $1.4 million in scholarships to students – all through horseback riding.

Jane and the work of the Metropolitan Equestrian Team are a true inspiration and proof of what enough determination to do good can accomplish. I really enjoyed this deep dive by Nöelle Floyd‘s Lizzy Youngling on Jane’s work with MET. To learn more about the MET and how to get involved, click here. 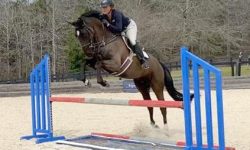 Courtney Cooper Ready for His First Event or Show