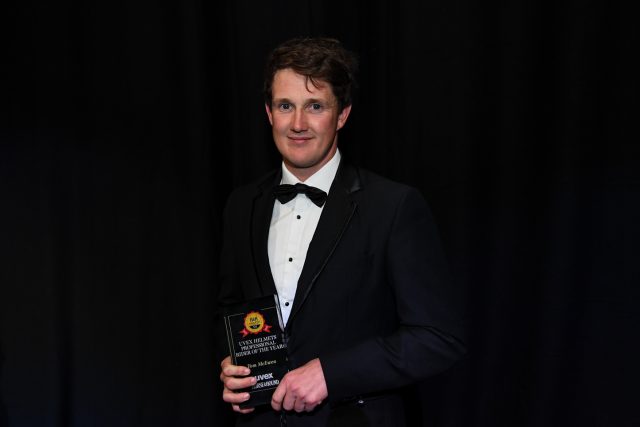 Team Great Britain eventer Tom McEwen capped off a bang-up 2021 by being honored as Uvex Helmets Professional Rider of the Year at the 2021 Horse & Hound Awards on Wednesday. After the 2020 virtual awards, more than 250 sponsors and guests were excited to return to a glittering in-person celebration held at Cheltenham racecourse.

Highlights of Tom’s year include earning team gold and individual silver at the Tokyo Olympic Games with Toledo de Kerser, followed by a second place finish at Pau with CHF Cooliser. Upon receiving the Professional Rider of the Year award, he shared what it meant to have such a special partnership with Toledo.

Other eventers honored included Lauren Innes for Pikeur Amateur Rider of the Year, who competes her own Global Fision M at the four-star level; Laura Colett’s groom Tilly Hughes for Absorbine Groom of the Year, and British Equestrian Performance Director Dickie Waygood for Outstanding Contribution.

Congrats to all! You can read a full report from the 2021 Horse & Hound Awards here.