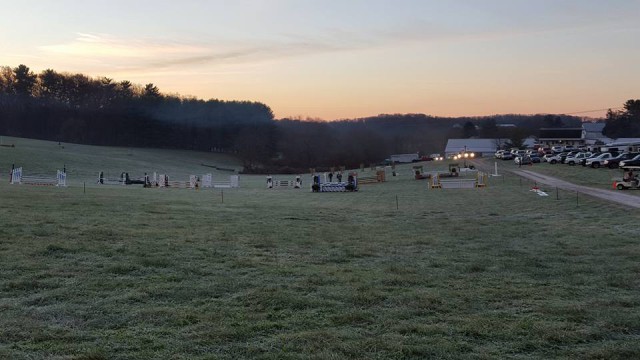 A beautiful morning for an event at Full Moon Farm. Photo from Karen Fulton's Facebook Page

If you build it, will they come? In the case of Full Moon Farm’s second recognized horse trials, the answer is YES! After last years very successful inaugural horse trials, the Fultons wanted to keep the momentum going strong as they headed into the final recognized event of 2015 in Area II. They accomplished this with style and ease as the parking area was beyond full with horses and rigs. It is great to see farms and families just like the Fultons have success not once but twice. Kudos to Full Moon Farm on ending 2015 with a bang.

Events Closing This Week: ….None….

HRN’s Holiday Radiothon: The Horse Radio Network Holiday Radiothon is coming up on Cyber Monday, Nov. 30! Featuring 20 hosts, celebrity guests and over $2,500 in prizes, you don’t want to miss this epic 12-hour long party. EN’s own Jenni Autry and Leslie Wylie are hosting the final hour, and we need YOU to call in so we can show the world eventers are awesome. [HRN Holiday Radiothon]

UMD has an Eventing Team: A total of 22 members make up the newly formed University of Maryland Eventing Team that will compete as individuals and as a team with the USEA. Although the university already has an IHSA team and an Equestrian Club, there was a void for eventers. Currently weekly lessons take place at Waredaca where members that do not own a horse can lease one to ride and compete. [New Eventing Team Overcomes Equestrian Opportunity Hurdles]

Take a moment to watch Mclain Ward and HH Azur put in an awesome jump round and jump off to win the $75,000 Big Ben International Challenge at the Royal.