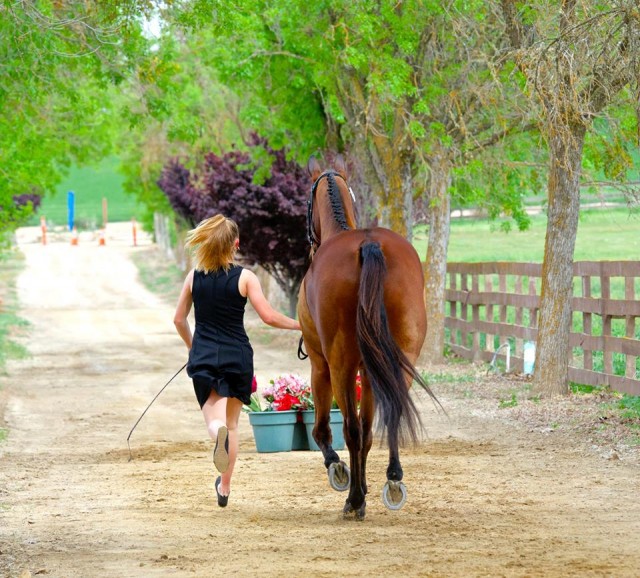 Kaitlin Hall and Given Half a Chance in their first CCI* jog. Photo by Liz Hall.

It looks like a beautiful weekend for some eventing in California (then again, it looks like most weekends are good for eventing out there! Heads up, Hawley, I’m moving!). The CIC3* division completed show jumping and dressage yesterday, and the CCI* and CCI2* divisions rode dressage.

The show jumping in the CIC3* took many victims in the form of rails down, with only the top three horses jumping double clear. The top three after show jumping remain the same: Mackenna Shea and Landioso sit in first on a 49.2, Matt Brown and BCF Belisco are on a 51.9 in second, and Lauren Billys with Ballingowan Ginger are in third on a score of 52.5. Matt Brown also finds himself in fourth as well aboard Super Socks BCF, who added just one rail for a score of 57.4. Lauren and Ballingowan Ginger retired on cross country at Galway their last time out, so I’m sure they are out for a much better run this weekend.

I spoke with first and second placed riders Mackenna Shea and Matt Brown, both of whom seem thoroughly pleased with their horses’ performances so far this weekend. “This is my second event back with (Landioso) in 11 months,” Mackenna said. “He was amazing in the show jumping; he was using himself so well and he was so rideable throughout the whole course. I think the cross country course looks fantastic; the footing and jumps look super and it looks a bit tougher than I’ve seen it the past few years.” Landioso was previously sidelined by a pesky injury, and Mackenna is thrilled to have him out again. “I’m really excited to go out and have a good time on my horse. I just feel really lucky every time I’m on him.”

Matt, who is piloting his two mounts in their first CIC3*, was also pleased with his horses. “They are both green to this level, and there is still plenty to be improved upon in the dressage, but I think they both put in solid dressage tests that are true to where they are in education and strength right now. (Super Socks BCF) is a work in progress for me with the show jumping, and I’m still figuring out how he wants me to ride him in other to get the best out of him. (BCF Belisco) is just sort of a freak of nature and tries so hard for me; I was happy he stayed true to himself and jumped a great round for me today. I’m excited to ride Derek (di Grazia)’s course tomorrow. With both of my horses new to this level, I’ll just be looking for a solid, educational round for them to build on in the future.“

In the CCI2*, it’s a literal three-horse race in a small division. Dana Estes and Worthy Opponent V.E. will take the lead on a 52.2. Leah Breakey and Master Plan, who last finished second in the CIC2* at Galway, are in second on a 55.6, and Kaitlin Veltkamp and Flashpoint D are in third on a 57.2.

In the CCI*, the top five are tightly bunched after dressage with just a handful of time separating them. Elizabeth Mahon Temkin and Castle Larchfield Purdy will lead going into cross country on a 45.3, Lauren Billys and Jitter Bug hold down second on a 47.5, and Derek di Grazia and Ringwood Justice will sit in third on a 47.8.

Cross country begins with Preliminary at 8 am local time at Twin Rivers, followed by the FEI and remaining National divisions. Stay tuned for much more from Twin Rivers, and don’t forget that you can send your photos or videos to [email protected].