We’re pleased to introduce a new series presented by Merial which will catch up with horses who have retired from a successful eventing career. If you have a horse you’d like us to profile, please email [email protected] 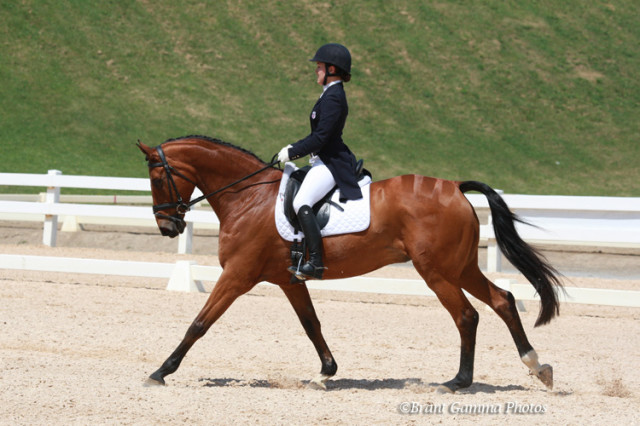 There aren’t a lot of young riders who can say that they’re sitting on an Olympic horse, but then again, there aren’t a lot of nineteen-year-old horses who can say they’ve been to the Olympics and back again to teach a young rider how it’s done. However, such is the story of Morgan Booth and Twizzel, who completed the Virginia CCI* this past weekend in style, finishing in third place overall in a division of 39 starters.

After Twizzel completed the 2012 Olympic Games, he returned home to Will Coleman’s Tivoli Farm in Virginia to take a vacation for the rest of the year. Will wasn’t sure what was next for the Westphalian gelding, as the pair of them had pretty much done it all at that point. Partnered together since 2006, Will and Twiz have completed Barbury CCI3*, Luhmuhlen CCI4*, Rolex CCI4*, Fair Hill CCI3*, and of course the Olympic Games.

“He was sitting at home with me, and we kept him in work, and he was looking great,” said Will when I talked to him on Saturday. “He just kept hanging his head out of the stall and saying, ‘Give me something to do!’. Obviously he wasn’t going to be capable of what I wanted to do, but Morgan was in need of a horse that could show her the ropes, and the stars just aligned”.

“Morgan is a very deserving, very wonderful kid, and Twizzel LOVES his new job. He has always considered himself to be the focal point of attention, and he couldn’t be luckier to be around the Booth family, as they love him dearly and take exceptional care of him. I couldn’t be happier.” Will told me all this with a big smile on his face, and you can see that it’s clearly fun for him to watch his old friend be successful with a new jockey. 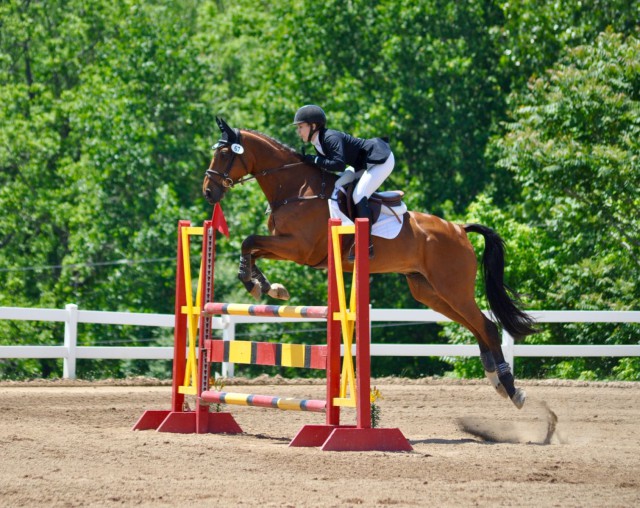 Morgan and Twizzel pulled the final rail to drop to third place in the CCI*. Photo by Kate Samuels.

Morgan is a local Charlottesville girl (whoop whoop!) and has been going out to Will’s barn to help out since the age of eleven, but has been more fully immersed in the training program for the past three years. In 2012, she became more serious about her eventing career, and started working with Will consistently.

Last year, after struggling with her horse at the time, Morgan was feeling a little defeated, and was given the opportunity to sit on Twizzel for lessons at Tivoli. After seeing that the two of them got along really well, Will suggested the Morgan take Twiz to an event, and so they entered the Training at Millbrook in August of 2014.

“That was his first event since the Olympics, and his first time out of the start box since London.” Morgan spoke to me from her tack room on Saturday as Twizzel was icing in the stall next door. “It was basically like hanging on to the stallion of Cimarron, and it was pretty adorable because he loves it so much, but he was stronger than any horse I had taken cross country before. Then I missed a jump in show jumping the next day, still in disbelief that I was actually sitting on THE Twizzel.”

Taking a four-star horse down to the Training level is no easy feat, and Twizzel was convinced for a while that it was a joke. He was accustomed to landing off a jump on cross country and going full speed away at a gallop, and that was simply not required at this level. “It was a bit of a process to teach him to stay steady for smaller jumps, but he got used to it, and he got used to the fact that I’m a totally different rider than Will, and he’s been really good about it all.” 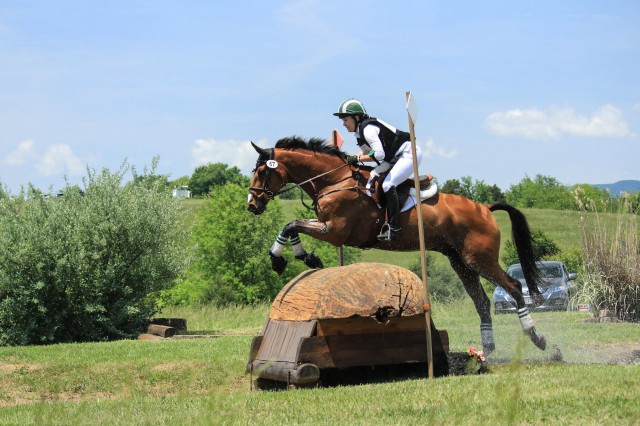 Twizzel stayed home in Virginia this winter with Morgan and her family, during which time he constantly wondered when they were going to take him to Florida, because he’d never been left behind before. However, this time alone helped their relationship grow stronger, and helped them form a better understanding between one another.

One of the biggest challenges for Morgan has been learning how to channel all of Twizzel’s power on the flat, but she’s found help in Katie Coleman. “Will knows [Twizzel] inside and out, but Katie knows what it’s like not to have three mile long legs, so between the two of them, I get really good instruction,” said Morgan. “He’s only 16.1, but he rides really big, he moves really big, and he’s extremely wiggly, so there’s a lot to keep together.”

Convincing Twizzel to take it down a notch for the smaller jumps on cross country was also a process, and one that Morgan says she is still working on even now. “He’s can be a bit strong on cross country, but it’s not that he’s fighting, he just really wants to go and he knows his job. He’s such a good cross country horse and he loves it so much, but he’s just going, no matter what, and he can be a bit over confident at times.”

The last time that Twizzel competed at the CCI* level was in 2005, exactly a decade ago, so in a sense he’s had to rewind the clock and remember things that he hasn’t thought about in a very long time. “This is his 41st FEI competition, which is absolutely ridiculous!” said Morgan, and I have to say that I quite agree. To complete 41 FEI competitions is no mean feat!

“We joke that once he’s fully retired we will have to bring him to the events and hack him around, because he loves to parade about and pretend everyone is there to look at just him. He’s an older guy, but he still thinks its a blast, and he loves to be out. He thinks he’s the king of the world.” 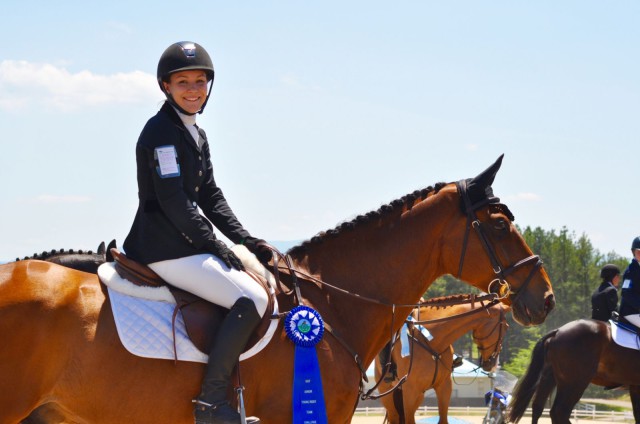 Morgan & Twizzel placed third overall in the CCI*, and won the award for the highest place young rider. Photo by Kate Samuels.

After sitting in second place all weekend on their dressage score of 43.2, the pair completed show jumping, just knocking the last fence for one rail, which dropped them from second place into third overall. Morgan finished the weekend as the highest placed young rider in the CCI*, as well as qualifying for NAJYRC.

“He has been great for my riding, because he’s not the easiest, and he’s used to a great ride from Will, so I know when I ride well and I know when I make mistakes. However, he’s so willing and I’m so incredibly grateful for the opportunity.”

“The plan is to hopefully go to Young Riders for the CCI* in July. We did a vet check [Saturday] and he looks great,” explained Morgan. “I get the most nervous competing him because he’s so talented, and I want to do well for Will and I don’t want to make mistakes. Will loves the horse so much, I don’t want to bring shame on the family!”

After NAJYRC, the plan for Twizzel and Morgan is up in the air. She’s heading to college at the University of Virginia in the fall, and while the hometown advantage means she will still be able to ride at home and with Will, she’s not sure how the workload will affect her competition schedule. Twizz will definitely get a vacation after July, and from there, the team will have to feel it out.

“He’s not going to go Intermediate, because there is no need. He will get a vacation, and then go back to work, because that’s what makes him happy. Maybe I’ll go to some dressage shows on him, maybe a little show jumping. Whatever makes Twizzel happy, that’s what we’ll do!”