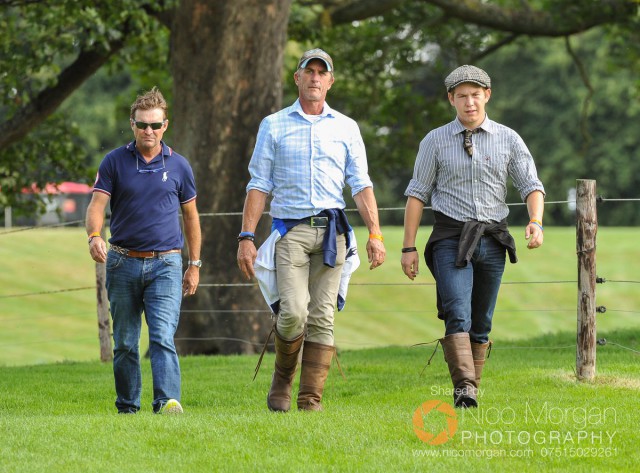 I managed to catch up with most of our U.S. riders this afternoon during the first horse inspection at the Land Rover Burghley Horse Trials, and warned them I’ll be bugging them all weekend! All horses passed the inspection this afternoon, and you can view beautiful photos from Nico Morgan and the full report on all the action at this link.

Supermodel Holly Payne Caravella told me The Fox Syndicate’s Never Outfoxed has settled in great. “He seems really happy. (The horses) got delayed a day so they got in on Sunday, and we went to a farm near here and stayed there two days, and he seemed to settle in really well. He’s been happy here, so, all good so far!”

Holly has her first look at Capt. Mark Phillips’ cross country course (which you can preview here) this morning with David O’Connor, Phillip Dutton and Elisa Wallace. “It’s big, which I knew it would be — big and long and technical and there’s a ton to do. They do have very nice options, so if you jump into something and it’s not going your way, there’s an easy way to pull out and go and do something else in a lot of places which is nice. 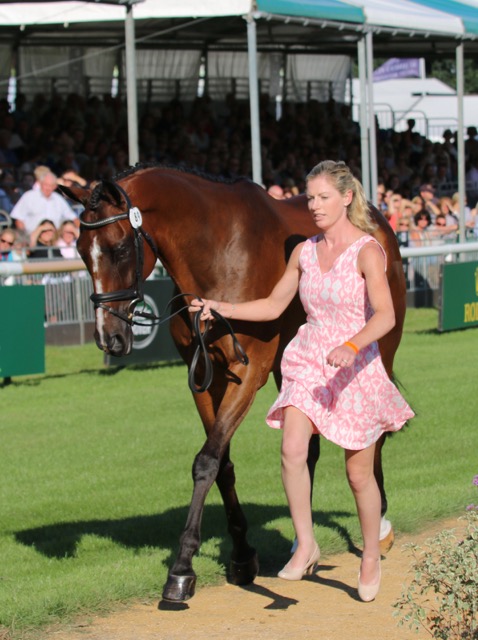 “You could commit to going the direct route all the way round but you don’t necessarily have to pick up a 20 if something goes a little off. You could just decide to pull out and take another route. It’s going to take a lot of walks to figure out all the routes and options and my back-up plan everywhere.”

Holly’s next walk will be on her own, and then her mum (uber judge and Rio ground jury member Marilyn Payne) is coming over soon and will “definitely” walk with her, and then perhaps a couple more times with Phillip or David to draw on their experience.

As a Thoroughbred, Never OutFoxed’s strength lies in his talent for the cross country phase, and that’s why Holly wanted to bring him here. “There are good galloping breaks, which hopefully will help him settle into a rhythm but it definitely seems way more intimidating than Kentucky,” she said.

Poor Holly is drawn second last of the 72-horse field and so will have a long wait on Saturday. “It’s hard because I’m going to stress all day, and he [Fox] knows it’s cross country morning and he’ll actually start shaking in his stall and pawing. On the plus side I’ll get to watch.

“There were plenty of things I walked today that I had no idea how they’re going to ride so it will be nice to watch everyone else go and see how it’s riding and then make a firm plan. Hopefully the weather holds out. The footing is really good right now and that was my major concern that if you go 80 horses in and it starts raining …” 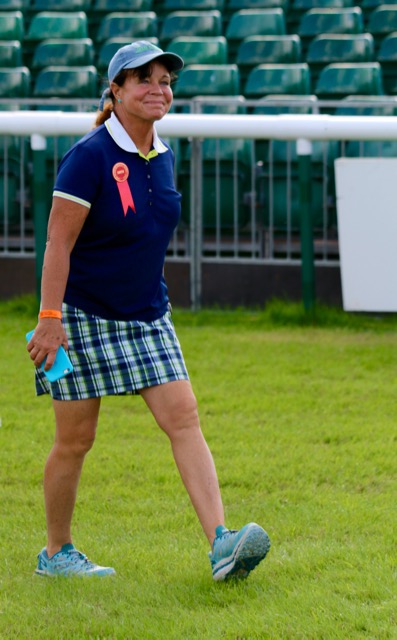 Bunnie Sexton was smart enough to walk the course with GB Team legend Pippa Funnell, who she’d met during a clinic at Galway Downs. On this first look at the track none of the riders are really discussing the finer points, they’re just getting a feel for what they have to do, and Bunnie’s first impressions are much the same as everyone’s.

“I think that things happen very quickly in the beginning, I’m going to have to really ride to that first water and I think that I’ll know more about how he’s going to respond to all the terrain after that,” Bunnie said. “I’m really looking forward to the first two waters because I think they’ll tell me a heck of a lot about how the rest of it’s going to go.”

Pippa’s advice to Bunnie? “Pippa was very logical and didn’t have anything particularly groundbreaking to say, just that horses are horses and you’ll feel what you need to do underneath you, and if you don’t come in with enough power you’re in trouble. I think it’s just words you live by!”

Bunnie had come prepared to be awed by the size of the jumps but not so much Burghley’s particular countryside. “I think the fences are as I expected. I wasn’t aware of strange things like road crossings where you go down a very steep embankment and then come back up one [Capability’s Cutting, VERY steep!].

“I don’t know what he [Ecko/Rise Against] will think of that. I imagine he’ll be fine because he’s very agile, but they are just unexpected things so I’ll be riding very much by feel.” On actually making it to Burghley? “I just feel so lucky, so lucky, and so grateful for everybody who helped get me here, it takes a village for sure. I’m sorry if I’m a bit emotional [there may have been a few tears], not enough sleep and a lot of excitement!” 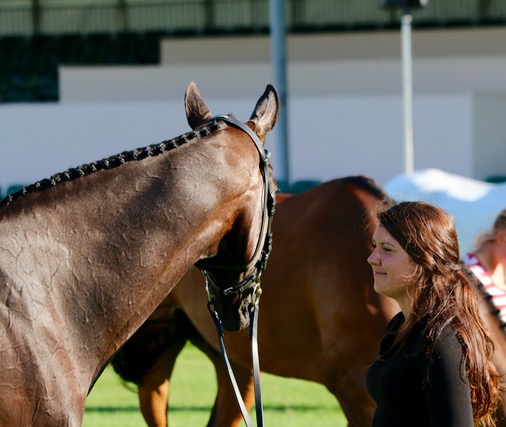 Libby Head and Sir Rockstar have been based with Tim Rusbridge just outside Gloucester on the advice of Mike and Emma Winter since their oh-so-impressive run at Badminton. They’ve competed at Aston Advanced and Hartpury CIC3*and feel ready to tackle big, bad Burghley.

“I think he gained a lot of confidence over the Badminton course and he’s seen more different questions over here, on cross country especially, that I think he’s really learned from. I think over the last year he’s just got better and better at every event and he’s really settling down and I can actually ride him in the ring now, which is a whole other experience and I’m having to learn to ride him differently.

“He’s even a bit fitter than he was at Badminton. With it being so close to Burghley he didn’t lose as much fitness from that and now he’s just built on that and it will be nice for the hills here. I think the course looks great and hopefully very doable, and I think it will be a really great course for him the way it’s set up with the terrain and everything.”

No matter what happens Libby and Sir Rockstar will be headed home to the States next week. “I’m really excited, I miss my dog and my friends, and everything!” 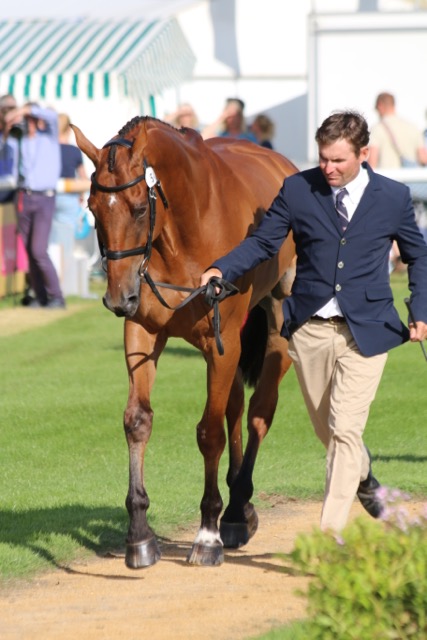 Rio bronze medalist Phillip Dutton last competed at Burghley in 2009 with TruLuck, finishing in fourth place, and he said it’s still the same massive course he remembers. His mount Fernhill Fugitive has completed Rolex twice and will benefit from every ounce of that experience.

“It’s quite relaxing being at an event with one horse that’s very quiet and doesn’t need much riding. My relaxed state ended when I walked the cross country though,” Phillip said. “As expected it is very big and wide right through to the last jump. Add the hilly terrain to the course and that’s why Burghley has gained the reputation as the toughest four-star in the world.”

U.S. Coach David O’Connor told me he comes to Burghley in a slightly different role from that at Rio. “I think you do coach differently. Some of the people that are here you’re not working with a lot so you just offer whatever help you can, if they want it. If you can be eyes on the ground for them, that’s fine. 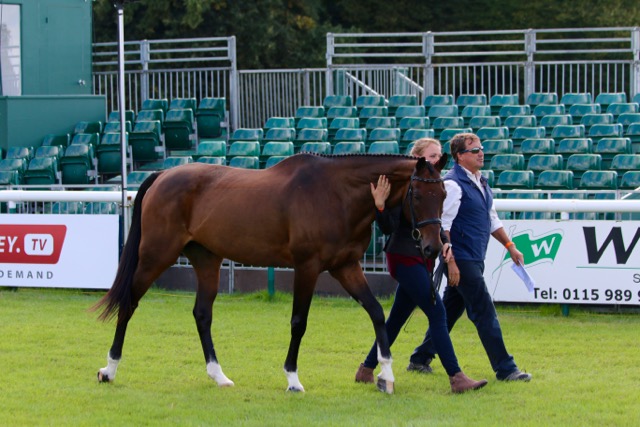 Bunnie’s daughter Maddie Sexton and Rise Against on the move with David O’Connor. Photo by Samantha Clark.

“They’ve gotten here on their own, and if they feel like they’ve got their own people that’s fine also. We’ve been here so much and so we try and make some of the details easier for them, especially as it’s their first time for most of them.”

Despite the fact that all the females on the U.S. squad here are tackling Burghley for the first time, David feels quietly confident that they’re all on good cross country horses, and Phillip Dutton, well, he’s Phillip Dutton.

“Phillip obviously brings great experience to the table, and he’s going to really test his horse out this weekend. Everybody’s got different goals that you can look at for what they want to achieve out here, but the first time at Burghley is a big experience.”

David’s shared specific thoughts on the cross country: “It’s quite strong at the beginning, a lot of big, wide jumps at the beginning leading all the way up to the Cottesmore Leap at 12, and so hitting those easy and having those conserved is a big part of the course as a whole. It’s strong enough. 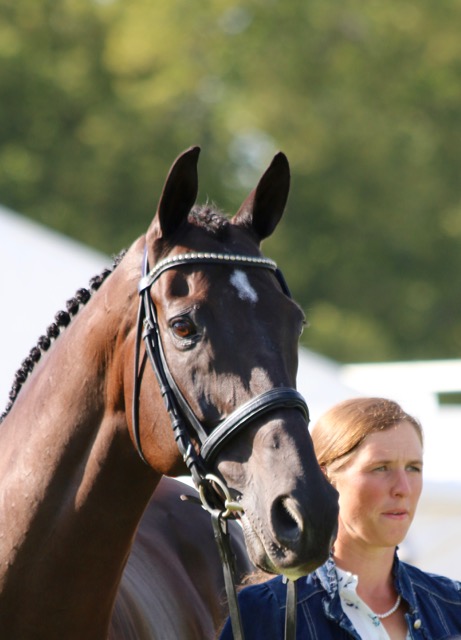 My sincere apologies for missing Elisa Wallace, but looking forward to catching up with her after dressage with Simply Priceless tomorrow. I was lucky enough to walk some of the course this morning with Horse & Hound esteemed photographer Peter Nixon and I was telling him about the U.S. contingent here this year, and as tough as the cross country looked as it unfolded before us, I feel a real confidence.

We have our newly minted bronze medalist superhero Phillip Dutton leading the pack, I only hope he gallops with his medal tucked furtively under his vest (english = undershirt) and that it thumps slightly against his chest every stride!

All of our gals, and yes, I’m going to go all Kentucky and call them that, have such special stories, and such great verve and inner strength and sheer determination. I told Peter how lucky I am to be here with them and I have utter faith in them. You’ve got this ladies! Let’s get dressage underway and out the way and on to the real stuff! 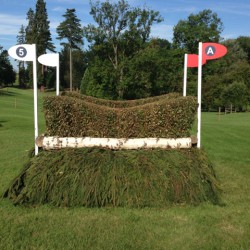 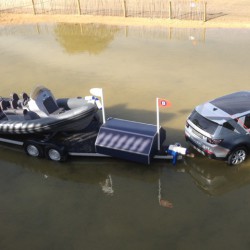 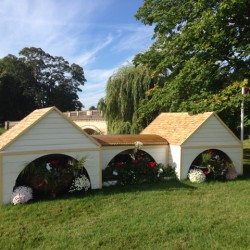