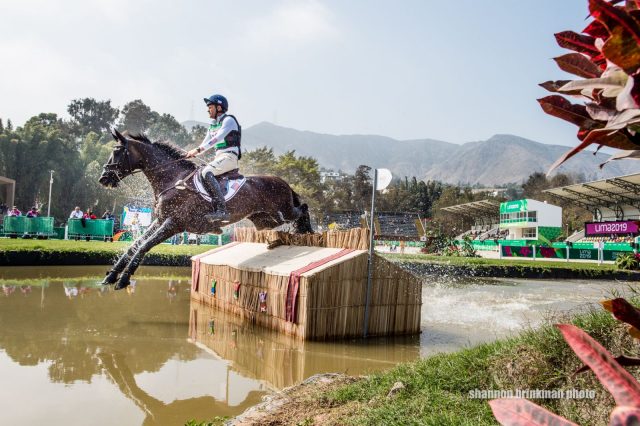 Team USA came out swinging across Jose Ortelli’s track to keep the stars and stripes in gold medal position after cross country at the 2019 Pan American Games. The four-member squad sits on a score of 91.2 with Boyd Martin leading the way in first place individually. The team is only one phase away from a crucial top finish to ensure a spot for the United States in the Tokyo 2020 Olympic Games. 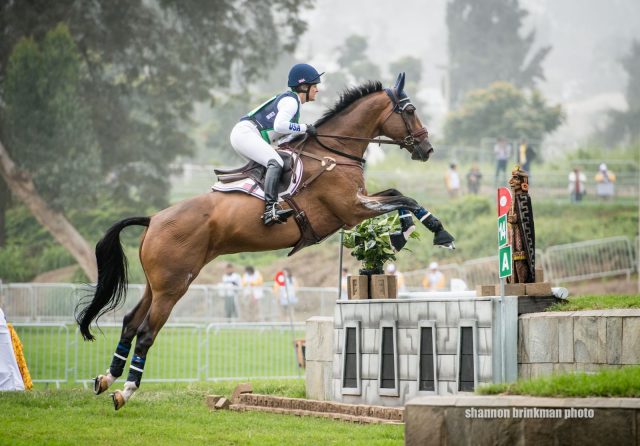 Pathfinder Lynn Symansky set the tone early, jetting around clear and inside the time with RF Cool Play, an 11-year-old German Sport Horse (Condors Champion x Roxana, by Radscha) owned by the Donner Syndicate. She and “Coolio” made the effort look deceptively easy, as they stood as the only double clear round for nearly the entire competition. They remain on their dressage score of 29.2 for second place.

“The first water was a bit hairy, didn’t quite go on my plan A or B, but got it done. The rest of the course honestly rode according to plan,” Lynn said. “(Going first) you don’t have the advantage in the beginning of knowing if time is easy or hard to make, so you have to go pretty quick just in case,” Lynn said. “In hindsight I may have gone a little too guns blazing in the beginning, really startled him in that first area coming into the water, but he’s such an honest cross country horse that he took off in I don’t even know in how many legs and in how many strides, and just held our line and fought for it. After that, we settled down a bit. He never lost his confidence the whole way around. He felt super on it and had plenty of gas left in the tank.” 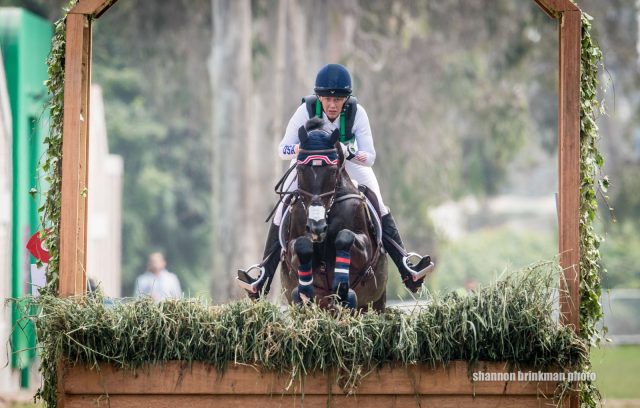 Nerves rose when the formidable pair of Tamie Smith and Mai Baum came home with 40 jumping and 14 time penalties. Tamie and “Lexus,” a 13-year-old German Sport Horse (Loredano x Ramira, by Rike) owned by Alexandra Ahearn, Ellen Ahearn and Eric Markell, ran into trouble at 16, a right handed corner that she says the horse didn’t read well. Another 20 penalties were added when the pair crossed their tracks at fence 23, leaving them with a two-day score of 76.8 for 19th place individually.

“Obviously I’m disappointed because I had a run out at the corner. It all rode a bit rough and scrappy. The flag was pointed kind of the wrong direction; I don’t know if it like blocked his vision, it was almost like he didn’t really read it until the last second. We were all worried about that, wondering what they were going to do about it,” Tamie said. “I rode it strong. I don’t think I could have done anything different. I just don’t think he read it. It’s a little bit how this course is—it’s rough. You’re going fast and you’re stopping and turning and fast again, and the horses don’t get in a rhythm. But it’s like that for everyone, you just gotta make the best of it. 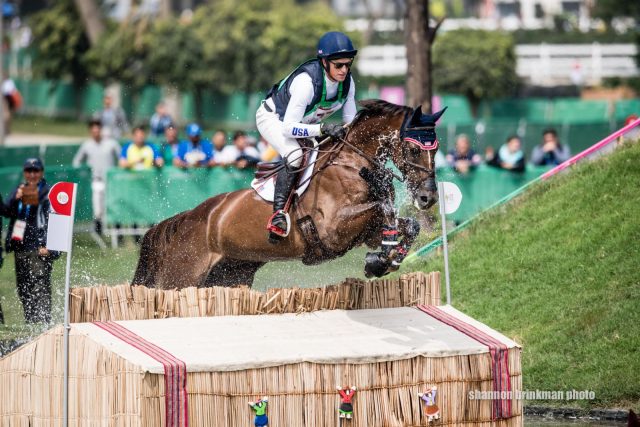 That put the pressure on the final U.S. rider who needed clear runs. First up was team rookie Doug Payne with Starr Witness. Though relatively green, the 8-year-old Dutch mare (Chello II x Carmen, by Veneur), who is owned by Doug, Laurie McRee and Catherine Winter, blazed around a beautiful clear with 8.4 time penalties added, moving the pair into fourth place on a score of 36.4.

“She’s a total freak. She makes really easy work of anything that’s asked of her. It rode right to plan. Going out, Erik’s last works were, ‘Come home clear,’ so that’s what we did. To have a (young) horse like this coming up… she could be doing this for another ten years. I’m very lucky,” Doug said. 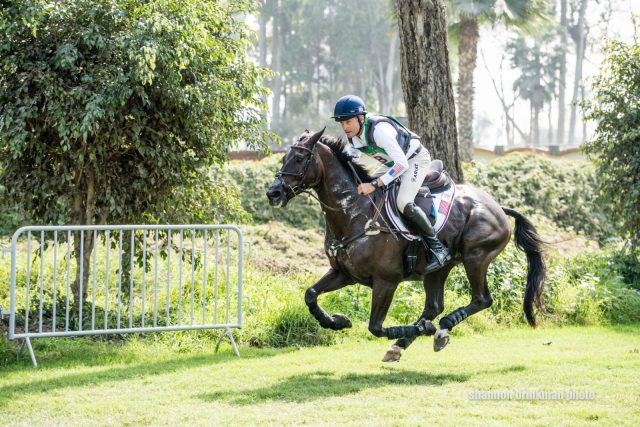 Boyd Martin had years of team experience to rely on as he left the start box with Christine Turner’s Tsetserleg. He and the 12-year-old Trakehner gelding (Windfall x Thabana, by Buddenbrock) earned the only other double clear performance of the day, solidifying the United States’ hold on gold medal position — with 26.5 points of breathing room! — and guaranteeing himself the lead.  They remain on their dressage score of 25.6.

“It was a lot harder than I expected to be honest, and I was on a very experienced horse. I walked it and thought, ‘This is a tough track for the level.’ It wasn’t very fun watching everybody crash and burn this morning, but I put a lot of training into the horse and he gave me a great ride,” Boyd said. “The time was a lot harder to get than I thought it would be. My horse is quite fast, but he’s not very good at turning or slowing down, so my plan was to set out a little steady and build up, and I set out a bit too steady. Luckily he’s got speed and there’s a couple of good gallops in the back.” 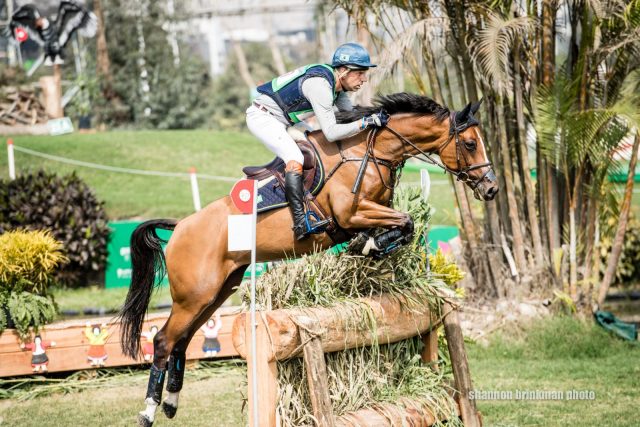 Despite having only three combinations left in the game, Brazil used their cross country performances to climb into silver medal position on a score of 117.7.

Carlos Parro and Helena Ashworth’s Quaikin Qurious are the highest-placed Brazilians in third. The 10-year-old who by is West Point Quickfire jumped clear with only 6.8 time penalties for a current score of 34.9.

Brazilian pathfinders Ruy Fonseca and Ballypatrick Srs had a rotational fall at fence 7. The horse was unhurt, but Ruy suffered a broken humerus and three broken ribs. He is being kept in a nearby hospital for observation. 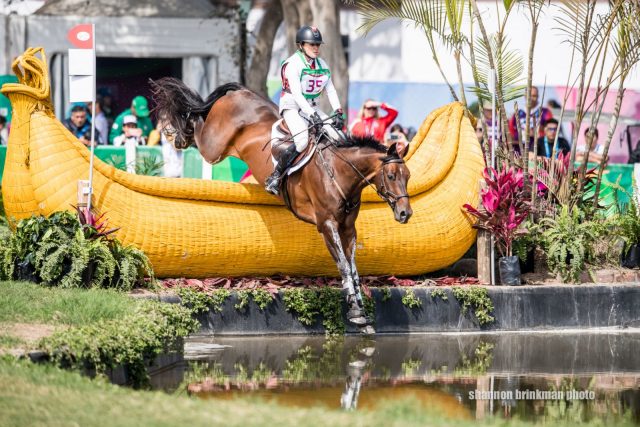 Jessica Phoenix and Pavarotti (CAN). Photo by Shannon Brinkman.

Canada had a mixed bag today. While all four completed, only one rider, Jessica Phoenix, came home without jumping penalties, and so the team dropped to third place, which currently puts them out of reach for Tokyo qualification, on 183.7 points.

In their third Pan American Games appearance, Jessica Phoenix and Pavarotti were the shining stars for the Canadian team. Going on course after watching teammates run into issues, she and the 17-year-old Westfalian (Pavarotti Van De Helle x Fedelia, by Foxiland xx) were laser-focused on a clear round, which they achieved with only 9.6 time penalties added.

These two have medaled at the last two Pan Ams (Individual gold, 2011; Individual silver, 2015), and they’re just on the edge of another individual accolade in fifth place on a score of 37.

Canadian pathfinder Karl Slezak was having a firecracker round, until he and Fernhill Wishes, a 10-year-old Irish Sport Horse (Chacoa x KEC Galway Bay, by Gildawn Diamond) owned by Karl and Kirk Hoppner, sadly slipped at fence 23 which caused them to cross their tracks. The 20 jump and 11.2 time penalties gave them a score of 58.9 for 13th place. 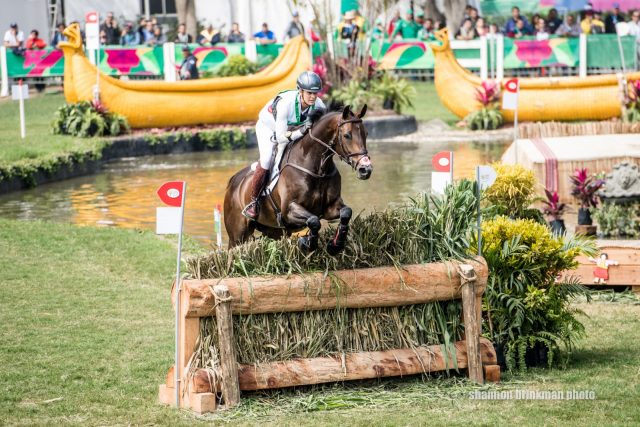 Colleen Loach and the 7-year-old FE Golden Eye had a green mistake that caused a runout at fence 12, the boat water. Colleen says the young horse was very backed off by the crowds, and since her crop broke early in the course, she couldn’t get him in front of her leg. They also had 41.6 time penalties for a two-day score of 87.8.

Dana Cooke and FE Mississippi had two stops, one at 14D, a brush chevron, and another at the corner at 16 where the mare actually jumped the widest part of the corner, but wasn’t in the flags. Their score of 110.4 puts them in 23rd.

Three other teams remain in the competition: Mexico, Argentina, and Peru. 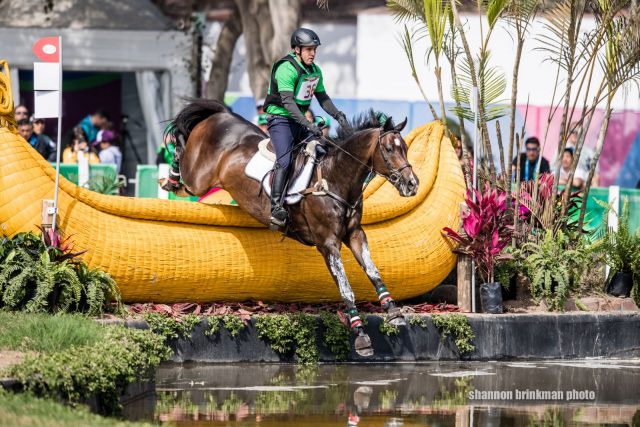 Mexico is in fourth place on a score of 224.6. Guillermo German de Campo M. is their highest-placed rider in eighth. He jumped clear with Quelite, adding 16.8 time penalties for a current score of 48. Jose Enrique Mercado Suarez and Tehuacan added 16.4 time penalties for 10th (52.2), and Jose Alan Triana Martinez had 60 jump penalites with Violento for 25th (124.4). Their fourth combination, Pedro Gutierrez and California Mail, were eliminated on course. 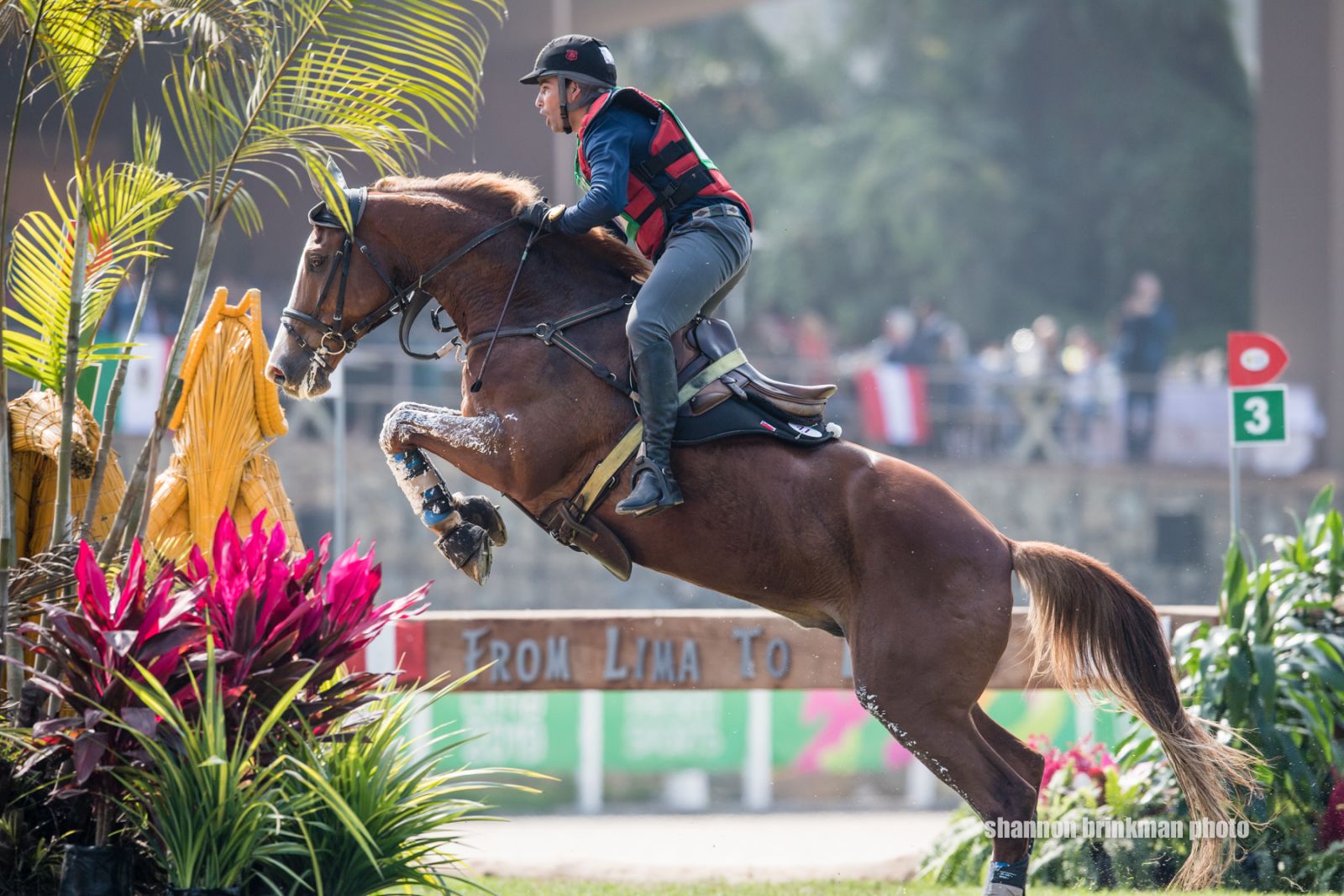 Though his country did not complete a team, Chilean rider Carlos Lobos Muñoz nudged his way into the top ten. He and Ranco, who gained enormous popularity in the 2016 Rio Olympics, went around clear with 18.4 time penalties for ninth place (49.4).

Colombia, Uruguay, Guatemala, and Chile are out of team contention after not completing with at least three riders each. Of the 42 starters, only 25 completed the course (59.5%), but the percentage of clear rounds was even slimmer at 35.7%.