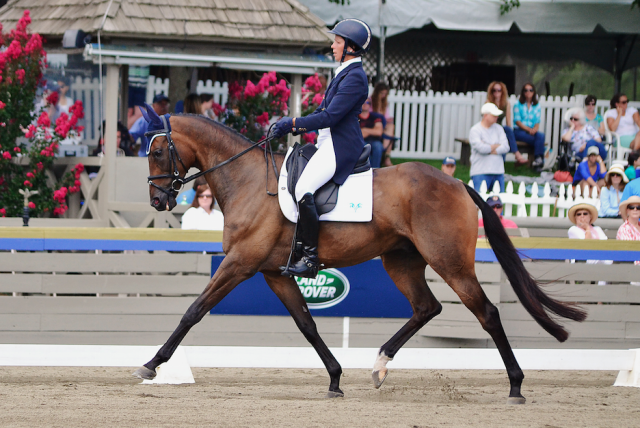 It’s time for everyone to up their game, because the 2015 FEI dressage tests have been released and movements are trickling down the levels. The good news is that the new tests build upon one another quite nicely, and even complement the existing USEF tests. The bad news is everyone better start practicing, because these tests go into effect on March 1, 2015. The new 2015 tests can be found here.

Both tests now have leg yield instead of just the B test, and the new 2015 A trot work is very similar to the 2009 B trot work. New in the A test is a three-loop serpentine holding one canter lead from A to C, from quarter-line to quarter-line. This movement previously appeared in the two-star tests, so does show some trickle down, but also is a good building block to the new movements in the two-star tests.

The B test also features a two-loop serpentine at the trot the full width of the arena, during which the horse should stretch his neck down and maintain the contact.

The biggest change for the two-star level is the addition of half pass in the trot for both A and B tests. We saw a hint of this when the FEI added it to the 2014 2* B test for the second part of last year, but there’s no escaping it now. The good news is that both of the tests set you up well to perform the half pass, give you plenty of time to do it, and require only that you hit the side of the arena somewhere between two letters.

Haunches-in no longer appears in either test. As before, half-turn on the haunches at the walk appears in the B test only, but as in the 2014 B test, the half-turns are performed off the rail as you cross the arena on the short dimension at a walk. In fact, the 2015 B test is almost identical to the 2014 B test with only a couple of changes, such as now allowing the option to sit or rise in the medium trot.

The biggest change in the B test is in the canter serpentines. Instead of going quarter-line to quarter-line, the serpentines now build upon the one-star test by requiring a three-loop serpentine holding one canter lead that is the full width of the arena. This change is an obvious building block to the three-star tests.

Canter half pass is the major addition to the three-star tests. This probably won’t faze the North American crowd too much, as canter half pass appears in both USEF Advanced tests, but the FEI had previously reserved it for the four-star level. Now it is not only present, but must be performed in 24 meters, rather than 30 meters as in the USEF tests.

Many of the other increases in difficulty are a result of the order in which the movements are strung together. For instance, test A now requires a canter half pass directly into the counter canter. It also builds upon the two-star test and prepares for the four-star test by requiring a three-loop canter serpentine the full width of the arena, which begins with a loop of counter canter and continues with two final loops in true canter with a lead change over the centerline between them.

The new B test asks for extended canter for only 24 meters (two letters) at a time, then moves into a medium canter 20-meter half circle. Flying changes also show up on a very tight diagonal of R to H or S to M, which directly follow a two-loop canter serpentine the width of the arena from A to X. The two-loop canter serpentine is a movement that also appears in the Advanced A test, so should not faze those who have performed that test.