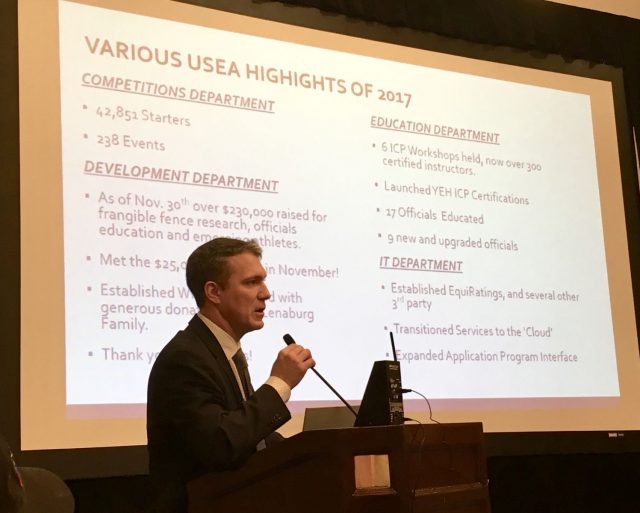 USEA CEO Rob Burk addresses the Board of Governors. Photo by Leslie Threlkeld.

The USEA Board of Governors met this morning for their first session at the USEA Annual Meeting and Convention in Long Beach, CA. The Board received an overview of the status of USEA Committee happenings and the financial health of the organization. They also voted on a key rule change proposal related to frangible technology and supported the creation of a special new grant.

USEA President Carol Kozlowski opened the session with a year in review. Here is a summary of her report:

In May we firmed up an agreement with (data analysis company) EquiRatings. This will add a layer to our safety strategy that we’ve never had before. I really like the idea of having data to determine the likelihood of success or failure.

The North American Junior and Young Riders Championship (NAJRYC) continues to struggle. Jumping and dressage split off this year and when it looked like the eventing wouldn’t happen, Rebecca Farm stepped in to host it. Rebecca Farm will it once again in 2018, but the future of eventing in the NAJYRC is in question.

Two-third of the riders at the 2017 American Eventing Championship rode at Training level and below. The Tryon International Equestrian Center really rolled out the red carpet for the event.

There was a round table safety summit on the sport hosted by the Chronicle of the Horse (read the reports on these talks here). It is a good synopsis of where we think we are but we still have a long way to go.

Thank you to everyone involved in the effort that went into selecting the 2019-2010 AEC location. We turned over all the rocks and pros and cons. I am feeling very confident in the decision and I’m confident that our membership will embrace and flock to the Kentucky Horse Park. 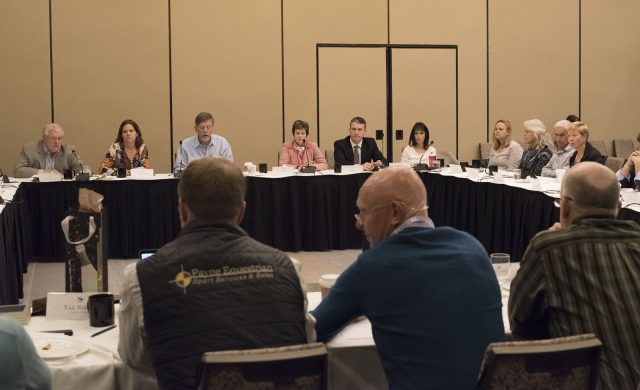 The USEA Board of Governors morning session. Photo by Leslie Threlkeld.

A report from the Treasurer/VP of Admin and Finance, Morley Thompson, revealed that the USEA is “well in the black” financially even though the individual Areas showed a loss due largely to the cost of sending horses and riders to Montana for the NAJYRC.

Kate Lokey, Director of Programs and Marketing, said that while the numbers in the Young Event Horse and Future Event Horse Championships have been healthy and growing, there are some significant changes coming to these programs based on feedback from riders, owners, organizers etc. The scoring system is being redesigned and the YEH dressage tests are being shortened. The USEA is also urging riders to go to the YEH/FEH symposiums to understand what judges are looking for.

The Eventing Course Designers and Builders Committee proposed a rule change related to frangible technology. This proposal changed the wording of EV140.9.b to the following:

At the Modified Level and above, all rail fences for which frangible technology can be employed, must use frangible technology (e.g. Frangible Pins, MIMs Clips, or any other load relieving devices). These fences include but are not limited to verticals, gates, open corners, and all open oxers in all cases. At a minimum these devices must activate with forces that have both vertical and horizontal components – the exception being the front rail at the point of an open corner, which may use a traditional forward pin.

Committee Co-Chair Tremaine Cooper clarified that the rule starts at Modified level because frangible rails have to drop a certain amount when activated and it is not always possible to achieve this requirement at the lower levels.

The Board of Governors approved the proposal with the recommendation of an extraordinary rule change (so that it may go into effect sooner than 2019). The proposal will now go forward to the USEF Eventing Sport Committee for approval.

Pam Duffy and Don Trotter of Sunsprite Warmbloods proposed a special new award for FEI riders that are competing in the States but represent a country other than the U.S.

Pam is from Mexico and always considered Mexican eventer and show jumper Captain Mendivil-Yucupicio, a 1980 Moscow Olympic Bronze Medalist, to be her role model. Pam said he had no money and learned to ride on donkeys and mules. He died two years ago and in honor of his memory and character, she wants to sponsor a $5,000 prize and trophy made in Mexico to one person per year for the next five years.

The intention of this award is to help eligible riders who could use additional support to advance their career and spotlight people who are up-and-coming role models and exhibit the same perseverance, determination and grace under pressure that was typical of Captain Mendivil-Yucupicio.

The award would be limited to international riders competing in the U.S. in their capacity as a citizen of another nation, excluding the U.S. and its territories. Eligible riders would have to compete and finish a minimum of three FEI events within the U.S. during one competition season. Both professionals and amateurs are eligible for this award.

The Board was unanimously supportive of the creation of this award, and Rob recommended that it be sent forward to the USEA Foundation to draft an agreement.