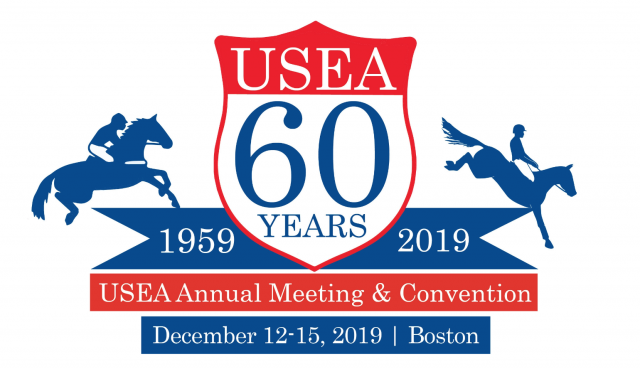 Welcome to Massachusetts for the 2019 USEA Annual Meeting & Convention which is taking place at the Sheraton Boston Hotel and where the currently below-freezing temperature is surely a shock to the system of everyone who has traveled north to Area I to attend.

The convention kicked off today with multiple forums and talks and this afternoon’s Board of Governors Meeting served to review happenings of the past year and to discuss the current state of affairs in the organization.

Current USEA President Carol Kozlowski, who will be handing the baton over the President-Elect Max Corcoran at the end of the convention, kicked off the meeting with some welcome news: that after an underperforming 2018 attributed to a particularly rainy year, the number of starters rebounded in 2019 and the number of USEA events rose as well. She specifically highlighted the success of a few competitions in particular, including an increase in entries at North American Youth Championships (NAYC) held at Rebecca Farm and the “spectacular success” of the AECs, which, with it’s 1,072 entries and 969 starters, broke the record for the largest horse trials in North America.

USEA CEO Rob Burk added that it’s been a record-breaking year in numerous ways, noting also that the Adult Team Challenge at this year’s AECs hosted a record number of 53 teams and that there was record usage of Xentry, the USEA’s online event entry system, this year.

Carol also spoke of other successes across the association, including that the Young and Future Event Horse (YEH and FEH) Programs also flourished with large Championship rosters. 20 horses currently on the USEA leaderboards are graduates of the young horse programs, which points to success in the program’s mission which is to identify horses with the disposition and talent to go on to excel at the upper-levels.

The nationwide launch of the Volunteer Incentive Program (VIP), which clocked 46,066 hours put in by 3,089 volunteers at 165 events, demonstrated the immense amount of manpower needed to propel this sport and highlighted the generosity of the USEA membership in donating their time.

One ongoing challenge that the Board is working towards addressing is that of scheduling competitions fairly, such that new events are welcomed to the calendar without aversely affecting existing events that already run close to the desired date.

Prior to ending her address Carol acknowledged that it has also been a particularly difficult year for the USEA’s membership and the sport of eventing as a whole, as we experienced four fatalities directly resulting from participation in the sport within a four month span. She assured that each of those fatalities, three of which occurred during schooling and one which occurred during warm-up for the cross country phase, were rigorously investigated with the hope of gaining insight to prevent future accidents. Though schooling courses are not directly overseen by the USEA, the USEA has created guidelines for jumps at schooling facilities and they have also identified a need to make some changes to the presentation of jumps in the warm-up.

Morley Thompson, USEA Treasurer, further detailed this year’s growth of the sport in his address to the Board. He cited key indicators as a 4% overall increase in starters, which is particularly significant considering that last year’s starters dropped 8% from 2017.

Morley also said that the USEA has operated with zero debt in 2019 and has been trending towards a net positive three-year total, despite the losses incurred in 2018. There was a small decrease in number of USEA members this year as well as a small decrease in starter revenue, but the increase in membership dues that was experienced last fall, plus the increase in revenue from merchandise sale (mainly attributed to the AECs) made up for it.

Areas II and III saw the most growth over 2019, while participation in Areas I, V, VII, and IX was down slightly. Participation in the lower levels of the sport also rose; and while the number of starters at Preliminary and Intermediate decreased slightly, starters at Advanced increased. Net entries in FEI events was about equal to last year, with some shift towards more competitors in the short-format divisions and fewer in the long-formats.