Consider this your base camp for all the action today. We’ve got the live stream included abocve and we’ll be running by the minute updates, so keep refreshing this page for the latest. You can find the entries/order of go at this link.

Of course you can also watch the action live thanks to EQTV. The action starts at 2 p.m.

4:11 Colleen takes down the second fence. Will has officially won this thing for the third time!

4:09 The angle catches them out at fence two and the rail falls.

4:09 Rebecca Brown starts out at breakneck speed. Here we go!

4:07 Liz Halliday-Sharp is next up. Can she beat Will?

4:06 Mia takes a risky inside turn to the fourth element, but they take down the back rail with a back leg. Her time is 41.400.

4:06 BGS Firecracker has a lot of opinions today! The two are flying.

4:04 Here goes Allie Knowles and Ms. Poppins. She slices to the second fence and gets very lucky.

4:02 Will Coleman and TKS Cooley won here last year. Can they do it again?

4:00 Hallie Coon started off all rockets, but she paid the price by taking the rail over fence 1.

3:59 Karl Slezak also falls victim to the EquiJets vertical. He finishes with just the one rail and a time of 41.073.

3:57 Lauren looks like she’s opting to take more direct lines, but not increase the speed too much. Let’s see if it pays off.

3:57 Let’s go Lauren! She and Paramount Importance head for the first one.

3:54 Here we go! The jump off is underway. Sharon White and Claus 63 are first up. Time allowed is 50 seconds, but really this is fastest wins.

3:37 Here’s who you can expect in the jump off: Colleen Loach, Rebecca Brown, Karl Slezak, Allie Knowles, Liz Halliday-Sharp, Mia Farley, Will Coleman, Lauren Nicholson, Hallie Coon, and Sharon White. We’re on a break now then we will be underway again!

3:36 Collen makes it happen to jump clear! She’s the final rider added to the jump off.

3:35 Colleen is working for it! FE Golden Eye has a spook in him today.

3:34 We’ve got another coming to the jump off! Great round for Rebecca Brown and Dasset Choice.

3:32 Leslie Law sees two rails fall during his round with Voltare de Tre

3:29 Liz and Monster are flying! This lady does not go to school, she goes to win.

3:28 Fresh off her win at Bruce’s Field, Liz Halliday-Sharp is on course with Cooley Quicksilver.

3:27 Charlotte finishes with two down and four time penalties.

3:22 The oxer at seven falls. They just got a little too much momentum coming toward it.

3:21 Alyssa picks back up and goes clear over fence three. It’s a big oxer to take after a break.

3:20 Whoops, fence three falls as Alyssa jumps over two. The bell rings as they reset it.

3:19 Caroline finishes clear with two time penalties, so she won’t be in the jump off. Now let’s welcome Alysa Phillips and Oskar.

3:17 Next up is Caroline Martin. They’ve rubbed a few from the start, but so far clear.

3:17 Mia is now the seventh person to join the jump off group after a beautiful round.

3:15 We are back on track. Mia Farley and BGS Firecracker get the final group started. They’re clear through six.

3:07 We’re on another drag break and then we will have 10 more pairs to jump.

3:05 Beautiful, beautiful effort from Allie! She moves on to the jump off. Their time of 70.761 seconds is also the fastest clear so far — keep your eye on her for the jump off!

3:04 Allie Knowles and Ms. Poppins have just a little rub on the first fence, but she’s certainly got her foot on the pedal today.

3:02 Jennie Brannigan and Ibella jump clear, but a time of 78.1 keeps them out of the jump off. Those two time penalties were expensive.

2:59 Melissa Boutin EWSZ Jalando are off and clear through three.

2:57 I hear some big cheers for Elisa Wallace and Simply Priceless.

2:56 That’s a shame — they take the rail at the oxer at 7. That was their only fault. Their time of 71.377 is the fastest four-faulter, so they could be in the money. They’re sixth at the moment.

2:55 From Canada, now we welcome Shelby Brost and Crimson. They’re clear over the first two, which have proved a little tricky so far today. Fence two is a vertical that heads straight toward the VIP tent.

2:54 Abigail carries on.  She takes a few more rails down with her, but I have to say she certainly kept riding better and better as she went. As Jon Holling said, “she will definitely learn something from this today.”

2:53 Abigail has three rails fall before having a stop at the middle element at the triple. They got a bit close to the first element, and couldn’t quite make up the distance.

2:50 Clayton opts to add an extra stride ahead of the liverpool at 6, which has been a popular choice among these riders.

2:48 Now we have Australian rider Clayton Fredericks in the ring with a pretty perfect shot into fence 1.

2:48 A clear round for Will Coleman puts them in the lineup for the jump off.

2:47 That was a close call at fence two. TKS Cooley is definitely giving some air time!

2:45 Here’s a big round: defending champions Will Coleman and TKS Cooley. He’s just taking a little walk around the arena because wind has blown over fence 11. He will start after it’s reset.

2:44 Kimmy Cecere and Lankmark’s Monaco knock the rail on fence 2, but have an otherwise lovely round.

2:43 It’s been a while since we saw a clear round, but remember: after those in the jump off are placed, the standings will go to the four-faulters who are the fastest. So far Sara Murphy is the fastest of those with one rail.

2:41 Meg Kepferle has a lovely start with the Thoroughbred Anakin. They’re clear so far through fence 4.

2:39 Oof the planks ahead of the triple at fence 5 come down. We will not see our past winner in the jump off. Sara did come in at 72.8 seconds, so it looks like the time is being pretty easily achieved by this bunch today.

2:38 Sara Kozumplik Murphy trots around the ring now with the gorgeous Rubens D’Ysieux.

2:38 Shannon looks thrilled with her horse. It was a lovely effort with just the one unlucky rail.

2:37 Fence number three, the Buckeye oxer falls when they drift ever so slightly to the right.

2:35 We’re just finished with the drag break, and now we welcome Shannon Baker and Balligowen Zeal.

2:28 We’re on a drag break now. So far we have four going to the jump off: Sharon White, Lauren Nicholson, Karl Slezak and Hallie Coon.

2:25 Hallie Coon got a little lucky at the second one. This pair might be a littler close to the time.

2:23 Kylie Lyman took down the last vertical in the triple to add four faults with Da Vinci Code.

2:17 Next up, Jessica Phoenix and Watson GS for Canada.

2:16 Ariel Aharoni and Dutch Times put in a beautiful effort, but just knock the middle down in the triple.

2:10 Riding for Canada, Karl Slezak also has a clear round.

2:08 Lauren will advance to the jump off after a clear round.

2:05 p.m. Second rider Anna Loschiavo has come out of the tack after a miscommunication with Fernhill That Guy Jack. She gets caught in the stirrup but thankfully both separate without issue.

2:03 p.m. Beautifully done through the triple for Sharon. This one is set on a one stride to a one stride making it a bit more difficult. 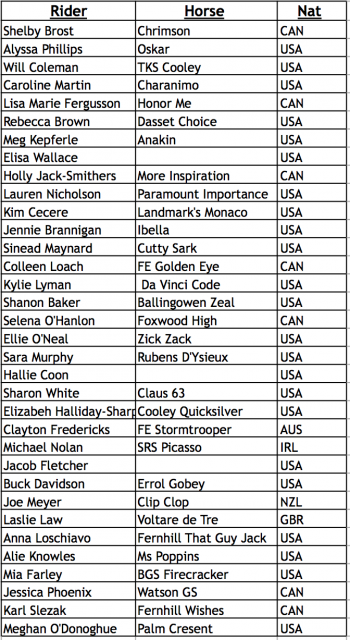