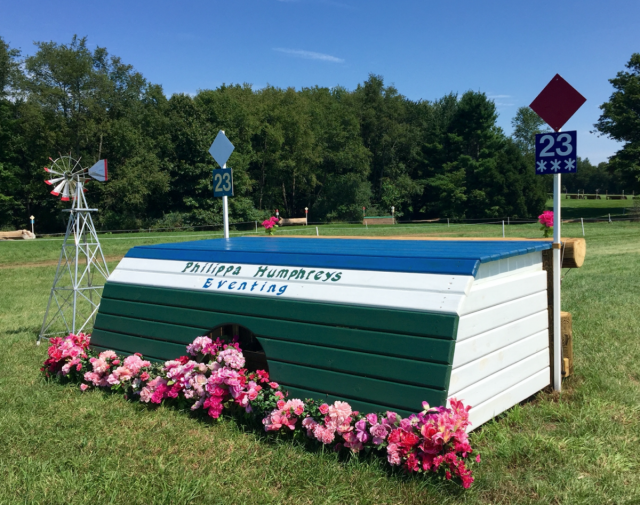 A table at former event venue Richland Park fitted with frangible technology in memorial to Philippa Humphreys, who died from injuries sustained in a rotational fall at Jersey Fresh in 2016. Collapsible and deformable fence construction has come a long way even in the past four years — and now it’s time for us to put it to large-scale use. Photo by Leslie Wylie.

We’ve come a long way in making our sport safer, but we’re not done. Not even close.

The subject of safety is nuanced and multifaceted. At the end of the day, it’s about personal responsibility. We must ride well. We must be well-educated by coaches who are honest about our abilities. We must make good decisions. Our courses must be well designed.

But not one rider on the planet is immune to making a mistake. Bad decisions will happen, no matter what stopgaps — qualifications, risk indexes, rules, watch lists — are in place to prevent them. Riders will press their luck. Horses will miss. Accidents will happen, but when they do it shouldn’t cost us our lives, or the lives of our horses. 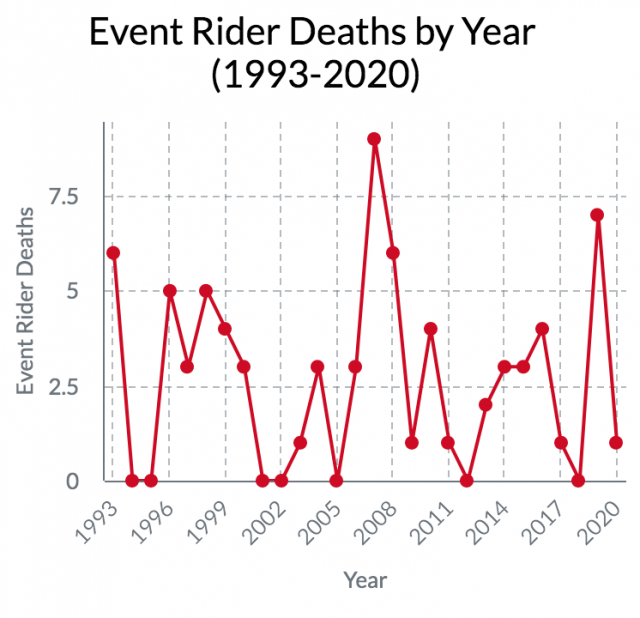 Data from national and international competitions. Graphic by EN.

There must be a safeguard in place, a buffer between a serious wake-up call and a funeral. That safeguard is frangible technology.

To be very clear, frangible technology is not a solution in and of itself or a substitute for good riding. It does not take away a rider’s responsibility to jump cleanly and maintain a healthy respect for the fence. But it IS a safety net. And now that the technology exists, there’s no excuse for it not to be put in place wherever applicable on every single cross country course.

Sure, money is an obstacle to making that happen, and the USEA does allocate funds that provide grants to competitions (about $26,000 a year) so that they can adapt the technology, but it’s not nearly enough to make the needed changes at a quick enough rate. So how do we expedite the process?

We save lives, and our sport, ourselves. And we do that by putting our money where our mouth is.

In the wake of the latest horse and rider fatality as a result of a cross country accident, Jon Holling, Chair of the USEA’s Cross Country Safety Committee, emphasizes that we can’t just wait around for somebody else to make eventing safer.

Our sport’s national and international governing bodies are doing all they can, as quickly as they can, but as Jon says, “It’s not just up to them. It’s up to all of us. I’m tired of watching of watching us die because we make a mistake when there’s technology that can help. We don’t need to do it anymore. There’s no excuse when we know there is technology out there that we know can make us safer.”

Now he is calling on us all to help.

The goal: Starting with tables, any fence that can be frangible in some way would be made so at the Preliminary level and above.

“To have the technology out there that can make it that a table collapses when a rider makes a mistake and not use it is just inexcusable, and we can’t do it anymore,” Jon says. “So let’s get the money together, and let’s make it to where we don’t have to be jumping around over fences that we know can be made safer.”

Do you want this to be the last cross country fatality we ever see? Two ways you can help make that a reality:

In the wake of a tragedy, our generous community tends to be quick to open our hearts and our wallets — there is a significant bump in donations following the death of a horse or rider, no doubt. But how do we keep the funds coming in?

Jaclyn Burke, a Maryland-based eventer who has competed through the three-star level, has an idea.

After witnessing an accident last fall, Jaclyn took it upon herself to do her part to make a difference. “I run a business, I have event horses, I’m trying to get back to the upper levels. But we need to make it safe and we need to do whatever we can. It will never be 100% safe, but the technology is there so we need to rally and raise the money in whatever creative ways we can.”

Jaclyn attended all the safety meetings at the 2019 USEA Annual Meeting & Convention in December, and saw firsthand the innovation that was being brought to the table. For example: the new frangible device that Dan Michael, an amateur eventer and retired aerospace engineer, has been distributing to course designers, which would be broadly applicable to many types of fences and alleviate many of the limitations of the current mechanisms on the market. 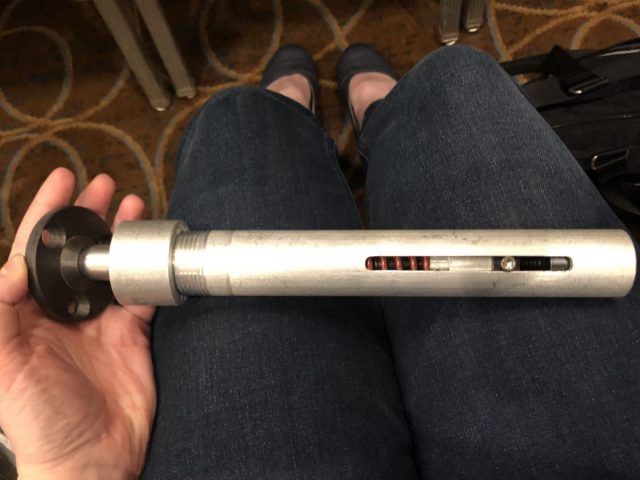 Dan Michael’s device is essentially a spring inside a cylinder — the spring’s compression can be adjusted to account for the weight of the log or rail that it holds and to change the amount of force required for the device to release. A rounded protrusion at the end of the device next to the rail or log sits in a cup on the log. Force that hits the log/rail pushes the protrusion into the spring and releases the device. The “ball and socket” connection of the device to the log means that it will trigger with force at any angle. Says Dan, “We have to build all of our jumps with the idea of conservation of momentum. When a rider hits a jump, the force is distributed and the weakest link needs to be the frangible break point.” Photo by Abby Powell.

“One thing I saw at the convention was that what is hard about this is that it is expensive, and that is what has held it back,” Jaclyn says, referring to Jon’s video as a call to action. “We as a group need to come together to raise the funds, because there is no reason that these tables shouldn’t have the technology that we have.”

Jaclyn started doing the fundraising math, and a possible solution presented itself: a nominal amount that riders would pay as part of their entry fee that would go toward funding the installation of frangible devices. Those small contributions would add up, even far surpassing Jon’s goal of $500,000.

She ran the numbers from 2019. “At a nominal fee between $5-20 dollars, you are looking at roughly $130,000 a year. You increase that slightly to $10-25 and get close to $200,000 depending on starters. Over a three to five year period we could make a serious dent in adding frangible technology to our courses,” she says.

That is, potentially, a million dollars by 2025.

Calculations of last year’s starters and the nominal fee and the potential revenue for frangible devices, by Jaclyn Burke.

Basically, she explains, it’s a pay-to-play system. The higher level you compete, the higher “fee” you pay toward frangible technology. Any USEF recognized level must pay into the fund at each and every competition. Like the drug/medication fee to the USEF, you have to pay a “line item” on your entry toward frangible technology. This money doesn’t go into the organizers pocket necessarily, but gets managed through a fund to then allocate money towards events, starters, etc. It would be a way to monitor that the fee is being spent appropriately.

“There is also a psychological effect that as a ‘rider, trainer, owner’ I understand what this is going toward and why it is important,” Jaclyn says. “Frankly if we all want to participate in the sport, we all need to contribute. I know this may be an issue in the foreseeable future as the making it mandatory and getting it passed by USEF, so in the time being if you have an option to opt out, you wouldn’t have to pay.”

It shouldn’t be difficult to have a software writer write it into entry systems like Event Entries and Xentry, and Jaclyn even volunteered to pay for the cost of having it developed as a field on the entry form.

“Not only have we lost lives, we’re risking losing the sport we love too,” Jaclyn says. “I hate to think where the sport will be in five to 10 years if we don’t take action today.”

Abby Powell contributed to this report.