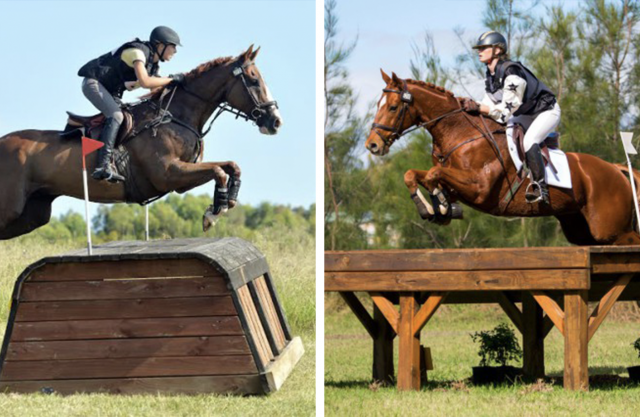 An inquest to investigate the deaths of 17-year-old Olivia Inglis and 19-year-old Caitlyn Fischer as a result of fatal injuries sustained in rotational falls on cross country in 2016 is underway at the New South Wales Coronors Court in Sydney, Australia.

Deputy State Coroner Derek Lee opened the two-week long inquest, which began on Monday, May 13, and will continue through Friday, May 24, to examine nine “public safety issues” surrounding Australian eventing, including:

Olivia Inglis was competing in her first CNC2* (now CCN3*-S) at Scone Horse Trials with Coriolanus, her 11-year-old Thoroughbred. She had previously completed two CCI* and one CIC* (now CCI2*-L and CCI2*-S) with the horse, and in 28 starts they had only one cross country jumping penalty. Olivia died on March 6, 2016, when Coriolanus rotated over fence 8B on Jonathan Nicholson’s course, an open oxer set four strides from a vertical on a downhill approach, and fell on her.

Charlotte Inglis, Olivia’s mother, said she had expressed concern over the fence when they walked the course the day before, as it had very thin rails, which Charlotte said gave it a “deceptive appearance,” and no ground line, Hunter Valley News reported. The oxer was not fitted with frangible technology.

Charlotte heard over a radio that Olivia had fallen and ran to her side. David Keys, a former combat medic with the army reserve and trained physician assistant, had already reached her. While Olivia still had a faint pulse, Charlotte testified that David “struggled” to use his equipment. Paramedics arrived on the scene 20 minutes after Olivia’s fall in a Westpac helicopter, but were unable to revive her. She was pronounced dead at the scene due to a ruptured pulmonary artery. Coriolanus was later euthanized due to a fractured neck.

David testified during the inquest that he had been hired to provide “general first aid” by private contractor Health Services International, News.com.au reported. While he approached his employer about needing better equipment and more advanced medical professionals at events prior to Olivia’s fall, David says that he was told that would be “cost prohibitive.”

Equestrian Australia (EA) now requires that paramedics with the capacity to provide advanced life support be present at events, a recommendation that came from the organization’s own investigation of Olivia’s death. “No less than 34 points of contention have been identified with the course and the coordination of the event, the accident and emergency responses, and the way safety was handled,” The Sydney Morning Herald reported.

Caitlyn Fischer was competing in her first CCI* (now CCI2*-L) at Sydney International Horse Trials with Ralphie, her 12-year-old Thoroughbred gelding. They had previously completed five CIC* (now CCI2*-S) together, three without cross country jumping penalties. Caitlyn died on April 30, 2016, when Ralphie chipped in an extra stride and rotated over fence two on Stuart Tinney’s course, a table set over water, and landed on her.

“It appears Caitlyn and Ralphie approached the fence at good speed,” Peggy Dwyer, counsel assisting the inquest, said, “but Ralphie appeared to look at something other than the jump as he approached it, and just before the jump Ralphie tried to put one more stride in.”

Caitlyn’s mother, Ailsa, gave testimony that she ran over to her daughter as soon as the fall occurred, but knew immediately she was dead. Ailsa also testified that EA’s report following the death contained “many errors of fact,” including which day Caitlyn had arrived at the competition, The Australian reported.

Following Olivia and Caitlyn’s deaths, Willinga Park owner Terry Snow donated $250,000 to further safety initiatives in Australian eventing. EA subsequently launched the Making Eventing Safer Fund, which distributed funding to events across Australia to fit fences with frangible technology. EA also adopted a rule change in February 2018 to mandate the use of frangible devices on all National short and long format courses, as well as all FEI courses.

Charlotte said she ultimately believes the culture of eventing must change so that riders and trainers are encouraged to speak up with their concerns about course design, Hunter Valley News reported. “We need more transparency in our sport. We need to be able to make informed decisions on whether we want to jump a course.”

Lucy Warhurst, EA CEO, said in a statement read at the inquest: “Both Olivia and Caitlyn are sorely missed by the entire equestrian community. … We know that you are determined to see the risk of serious injuries or tragedies are addressed. We share that determination.”

EN will continue to follow the inquest, which has dominated headlines across Australia over the past week. Further resource links are included below.